Oregon's biggest uranium mine was found by amateur rockhound 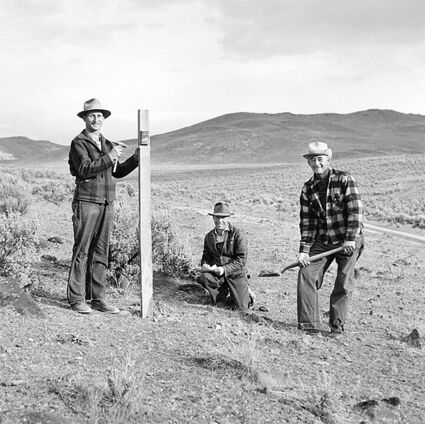 Uranium prospectors Lee Gibson, Allen Berends, and Elden Berends stake a claim in Malheur County in 1954 in this photo made by Harano Studio of Ontario.

During the go-go years of the uranium-mining rush of the early 1950s, the character of the uranium prospector became iconic. He was basically the gold-seeking "miner 49er" updated for the atomic age: in lieu of a mule, he rode an Army-surplus Jeep; in place of pick and gold pan, he carried a Geiger counter and ultraviolet flashlight.

For the better part of a decade seekers of "A-metal" deposits (the "A" stood for "Atomic") prowled all over the public lands of all the Western states, waving their Geiger counters at every promising rock formation. They spent a lot of time getting excited, and a lot of time being disappointed. Oregon has a lot of uranium, much of it in the form of autinite crystals; but it's very thinly distributed -- in most deposits, there is enough to set off a Geiger counter and get a prospector all excited, but not enough to mine.

So it's ironic but maybe not surprising that Oregon's biggest uranium strike was made by a guy who didn't even own a Geiger counter.

Lakeview business owner Don Tracy knew almost nothing about rocks and geology until he was in his late 30s. That's when he stumbled across some stones, multi-colored and obviously semiprecious, that he couldn't identify, and none of his friends could either.

Tracy hit the books, borrowing everything the Lakeview public library had on gemstones and even digging into geology textbooks from Oregon State University.

He also set up a rock shop in his garage with polishing and cutting equipment, and started going out with his family on regular excursions to hunt up new specimens.

He never did find a name for his stones; they were some kind of jasper, but beyond that, they apparently were unknown to science. Today they are known as Tracinite.

Tracy was still in the full flush of his new geology hobby when the uranium craze broke out, and the first thing he wanted to do was go out and use his new-found knowledge of minerology to try to find some.

Tracy didn't own a Geiger counter, but he knew what uranium oxide crystals looked like; and maybe he remembered seeing something like them on one of his previous rockhounding expeditions. In any case, he closed in on the future site of the White King Mine like a bloodhound on a scent. There, near the edge of the Fremont National Forest, he found a deposit of rocks with promising-looking crystals set in them. He promptly staked a claim around them, naming it the Lucky Day.

Back he went to Lakeview with a sample of the rocks. Because he wasn't kitted out for uranium mining, he had to borrow an ultraviolet light from a friend to shine at the rocks. Under it, they fluoresced the characteristic chartreuse color of uranium oxide crystals.

To make sure, he sent a sample to the Oregon Department of Geology. The department checked the samples and replied that there was uranium in them, in the form of autinite; but not enough to be worth processing. But they encouraged him to keep looking.

He did, moving afield from his first discovery, looking for rocks more densely packed with autinite crystals. And again, he very quickly found what he was looking for, near the banks of Augur Creek, stuck in the dirt wad of a tree that had blown down in a winter storm a month or two before.

Tracy still didn't have a Geiger counter; but his wife's uncle, John Rouch, did. So he brought the rocks to Rouch and asked him to scan them.

Rouch phoned that night in great excitement. The rocks were hot, he said, and better get back out there and stake a claim!

Rouch accompanied Tracy out to the spot after Tracy got off work the next day. It looked extremely promising. So the two of them decided to partner up to exploit it. Rouch had a bulldozer they could use to dig prospect holes, and, of course, a Geiger counter.

They took on a third partner as well: Walter Leehman, the owner of the land adjacent to the state forest on which they'd struck pay dirt, on which some of the uranium deposits lay.

The three of them staked 16 claims covering the "hot" ground in the state forest and Leehman's land, and got busy exploiting it. They named the claim cluster "The White King Group."

While all of this was going on, another group of prospectors was hunting across Lake County for the elusive A-metal using a very different technique.

Their names were Don Lindsey, Robert Adams, Clair Smith and Choc Shelton, and the four of them had gotten interested in uranium mining a year earlier, in 1954. They had pooled their resources to purchase an extremely expensive Geiger counter, a Detectron Nucleometer, which was allegedly so sensitive that one could use it to sniff out uranium deposits from low-flying airplane. Adams had a Piper Super Cub, so they used that to try the Nucleometer out.

It didn't work so great. Many hours of tedious, dangerous treetop hopping later, they had nothing to show for it. So they switched to prospecting the old-fashioned way, or rather the new-old-fashioned way, with a Jeep, using the Nucleometer like a regular Geiger counter.

They were doing that when rumors reached their ears of Tracy's big strike.

Nobody admitted it -- the prospectors said they were put onto the scent when a friend told them he'd seen pickup trucks leaving the Fremont National Forest with their beds full of rocks -- but it seems most likely they used the Super Cub to figure out where the mining action was taking place. It wasn't the kind of activity that one could do by stealth and by night.

As quickly as possible, they staked and filed a discovery claim and four claims around it, dubbing it the Lucky Lass Mine. And they weren't a moment too soon; other prospectors were already arriving. The word, it seemed, was out.

"Talk about excitement!" Clair Smith wrote, in correspondence with author Ruby El Hult. "The next day the discovery ... was in the newspapers, on the radio and TV all across the nation. People came from all over, some from 1,000 miles or more away."

"The first week after the discovery we estimated 2,000 cars drove by in front of the open cut," he added. "Of the ore dug and piled by the side of the road, two or three tons must have been carried off piece by piece as souvenirs by sightseers. Our little town (Lakeview) looked like Gold Rush days, with street hawkers on corners selling Geiger counters and scintillators."

Over that crazy summer of 1955, nearly 10,000 claims were staked in the Fremont National Forest by hopeful prospectors, most of them based on marginal readings from the cheap Geiger counters like the ones hawked on the streets of Lakeview. The area teemed with Army surplus Jeeps and battered pickup trucks. And one or two of them may even have panned out; but, a decade later, only two of them remained in operation: The White King and the Lucky Lass.

No uranium-mining story has a really happy ending. Few of the prospectors and miners who were involved in the industry realized how dangerous uranium ore really was.

But Oregon got off comparatively unscathed, at least by comparison with other Western states.

The White King and the Lucky Lass were open-pit mines, so Lakeview was spared the trauma of losing a generation of underground uranium miners to a pandemic of lung cancer a dozen years later. (The White King did have one underground mine, but most of the work was done in the big pit.)

After the uranium market declined to the point of the mines no longer being profitable, both were closed, and the pits filled with water to form White King Pond and Lucky Lass Pond (13 acres and five acres, respectively). Left behind were mountainous heaps of radioactive tailings.

Both sites were added to the government's Superfund cleanup program in 2001. Today, the hottest of the tailings have been hauled away and more-or-less-safely buried in a "disposal cell" area nearby, protected by a heavy layer of compacted soil topped with rock. The remaining tailings are buried on site, and the whole area presents the appearance of a peaceful meadowland -- although access is restricted due to the lingering radioactivity.

(Sources: Treasure Hunting Northwest, a book by Ruby El Hult published in 1971 by Binford and Mort; "White King, Lucky Lass mine sites change over time," an article by Lacey Jarrell published on Oct. 5, 2014, in the Klamath Falls Herald and News; "Uranium Miners, Malheur County, 1954," a detailed photograph caption by Cain Allen published on http://www.oregonhistoryproject.org on March 17, 2018)