The headline in the Portland Morning Oregonian on June 22, 1907, announcing the dramatic events that ensued after Lulu saw the lifeless body of her lover in the coroner's office.

On June 20, 1907, a retired military man named Charles Reynolds was hurrying home as fast as he could - with a .38-caliber revolver in his pocket.

Charles was an old U.S. Cavalryman in his 50s who had moved to Portland with his wife, Lulu, and his two grown children from a previous marriage. Charles had married Lulu in Colorado five years before when she was just 25 years old. In Portland, the Reynoldses were part owners of a bathhouse on the corner of Second and Washington and lived in a large house about 15 blocks away that Lulu managed as a boardinghouse.

They'd moved to Portland from Milton-Freewater, where they'd owned and operated a hotel. Lulu, with a powerful interest in music and a dream to become a great songwriter someday, had met a music teacher and band leader there named George Herbert Hibbins - whose stage name was "Professor Herbert." Lulu and the "professor" had rather hit it off. And when the Reynoldses moved to Portland - they'd started writing letters to each other.

At first, the letters were nothing out of the ordinary for a teacher and his pupil: friendly talk, song lyrics, suggestions for making a particular melody better. But by early 1907 they must have been getting a little racier, because when Charles found one it was necessary for Lulu to lie to him about whom it came from. She told him it was from an old admirer from Colorado who didn't know she was married and therefore unavailable, and that she had set him straight. And he seems to have accepted this - at the time.

But by spring, Professor Herbert's letters had gotten positively torrid, and Lulu's replies not much less so.

Meanwhile, Professor Herbert had been making plans. He had bought a small farm near San Diego, which he proposed to make for his Lulu a honeymoon home. Now he planned to come to Portland so that, in person, he could convince her to elope to it with him. The two of them would divorce their respective spouses, move to San Diego and live a life of peace, harmony, music and marital bliss - or, at least, that's what he told Lulu when he arrived.

Lulu found a nice room for Professor Herbert to rent, in a nearby building with a discreet side entrance into which she could sneak to spend time with him while her husband was away working at the bathhouse, and she started regularly slipping away to see him. There he wooed her ardently and shamelessly. He bought her an engagement ring worth well over $100, kissed it, and placed it on her finger.

Meanwhile, Charles was growing increasingly suspicious. Lulu had become cold and distant. And when he asked his two children - Rita, 19, and John, 16 - if they'd seen anything strange, John told of a strange man who was visiting regularly while Charles was away. He'd actually seen Lulu with her arms around that strange man's neck, kissing him.

Then, about two weeks into June, Lulu finally worked up the courage to ask for a divorce. Charles, greatly alarmed, launched a campaign to win her back. Nothing seemed to be working. Finally, he took her up to the Council Crest Amusement Park for a day of fun ... and interrogation.

"He tried to treat me kindly, and asked for one of his old-time kisses," Lulu later testified in court. "Then when Mr. Reynolds continued to question me I got angry and threatened to go home. Then he noticed the ring. He asked where I got it. I told him, because I was angry, that maybe he would know someday."

Subtlety was not, it seems, one of Lulu's strong points - a fact that became even more clear a day or two later when Charles noticed a strange picture on Lulu's bureau - a picture that looked a lot like a certain music teacher he'd met once or twice back in Milton-Freewater.

"Don't talk to him any more, sweetheart."

It all came to a head on a Wednesday afternoon, when Charles called Lulu on the telephone to ask her to come down to the bathhouse and she refused to come.

But then, as he was arguing with her, Charles heard over the telephone line the faint but distinctive sound of a man's voice in the background.

"Don't talk to him any more, sweetheart," the voice said.

Charles said not another word. Onto the hook went the telephone receiver, and out the door went Charles, his right hand wrapped tight around the butt of his .38.

It takes some time for a fifty-something man to run 15 blocks uphill, so Professor Herbert certainly had plenty of time in which to stage a strategic retreat. But it doesn't seem to have occurred to him. He and Lulu continued their leisurely preparations for a stroll in the park, and just as they were about to step out, the master of the house arrived, gun in hand.

"I'm onto you," Charles shouted at Professor Herbert, and opened up on him. Three shots; three hits. Charles was good with a pistol.

Professor Herbert ran down the street to a drugstore, where he was put in a bed and tended to, but one of Charles' bullets had cut through his intestines. In 1907, that meant sepsis. By 1 a.m., he was dead.

Charles was utterly unrepentant when the police arrived and arrested him. Assuming a "dramatic attitude" and pointing to a photograph of himself in the uniform of an 1870s U.S. Cavalry scout, he'd declaimed, "Do you see that picture there? I was with General Custer for a long time as a scout, and do you think that now, when my home was in danger from a despoiler, I would show the white feather? I will stand by my home."

But, Lulu claimed, there'd been no danger and no despoiler, just an innocent musician collaborating with an equally innocent wife to write a piece of music - a wife whose good name he himself had despoiled by assuming, in his jealous rage, that she was an adultress. Professor Herbert, with his last dying breaths, concurred. And authorities were disposed to believe them.

Until that is, Lulu was asked to come to the coroner's office to identify the body.

"Unable to conceal the love she bore Herbert, she cast herself upon his lifeless body and kissed his cold lips passionately," the Oregonian's reporter recounted with breathless avidity. "Realizing then that she had laid bare the secret of the tragedy, she made a complete confession before a Coroner's jury, denying the antemortem statement of Herbert, who had lied with his last breath to shield her name." 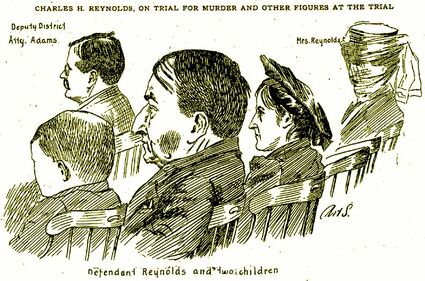 A drawing of the Reynolds family in court during Charles Reynolds' murder trial. Reynolds sits flanked by his 16-year-old son John and his 19-year-old daughter Etta; their stepmother Lulu, heavily veiled and very weepy, sits some distance away.

The ensuing murder trial held Portland enraptured. Lulu's love letters (rather zesty ones by 1907 standards; she called him "dearie" a lot) were published in the newspaper for all to see.

Charles' defense was distinctly sketchy - a variant on the same "stand your ground" legal concept that has recently come under fire in cases like the George Zimmerman trial. But when it was time for the jury to decide, it took them just 30 minutes to find Charles innocent on all charges.