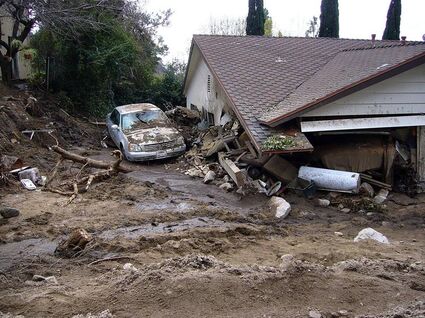 Debris flows are now on the list of dangers officials are on the lookout for in communities affected by wildfires.

In the early morning hours of January 9, 2018, intense rainfall loosened debris and mud in the Santa Ynez mountains, in Santa Barbara County, that had been torched by the Thomas Fire just months before.

"It gives you a sense of the physical forces involved," he said. "You see cars up in trees and boulders the size of trucks strewn about as if they were pebbles in someone's garden."

According to a new research paper co-authored by Swain, events like that one could begin occuring more frequently in the western U.S. because of climate change. In the coming years, hilly or mountainous regions within wildfire burn areas will face a higher risk for debris flows, mudslides and flash floods - all of which are likelier to occur on fire-scorched hillsides without vegetation.

That's because climate change is projected to increase the conditions - higher temperatures, low humidity and precipitation extremes, both wet and dry - that lead to those disasters, according to the study, which was published in Science Advances.

"Climate change is increasing the number of extreme precipitation events that follow extreme wildfire conditions," Swain said. "This is going to increase the incidence of post-fire debris flows and flash floods."

Under what the authors describe as a "high-warming scenario" - in which greenhouse gas emissions continue to increase at a rapid rate - climate change is projected to increase the number of extreme rain events that occur within 12 months after wildfires by at least one per year by mid-century.

By 2100, the frequency of such rain events is projected to double in California and increase sevenfold in the Pacific Northwest.

The scientists also project that more than 90% of extreme fire weather events in California, Colorado and the Pacific Northwest will be followed within five years by at least three extreme rainfall events, within the same geographic area.

Using climate models, the paper's authors analyzed the numbers of days each year when conditions would be projected to be in the 99.9th percentile for two measures: extreme weather conducive to wildfires and extreme precipitation. While there were only a couple of days each year prior to climate change, the number is fast increasing.

The researchers projected that extreme conditions will increase across the entire area they studied, which stretches from the eastern Rockies to the Pacific Ocean, and from northern Mexico to southwest Canada.

Events in recent years have offered ample evidence of the kinds of disasters that can be caused by extreme precipitation following wildfires: debris flows and runoff washed away major highways in Colorado and California and contributed to widespread flooding in British Columbia in 2021.

Although it's uncertain what climate change will do to average annual precipitation totals in the American West, the new research adds to a growing body of evidence that extreme climate-related events - droughts, floods, wildfires, debris flows and mudslides - will increase in number and worsen in severity.

Based on the projections, Swain said, officials should consider additional actions to mitigate and respond to the threats. Some measures have already been implemented: Government agencies have built rock berms to block debris flows and sprayed seeds on hillsides burned by fire to encourage plant growth. But more can be done, Swain said, to build stronger barriers, monitor areas that are at risk and evacuate neighborhoods when necessary.

"If we know to anticipate a widespread increase in these events, we can prepare for them and anticipate where they will occur," Swain said, noting that wildfires have to precede the extreme rainfall for debris flows, mudslides and landslides to occur.

The changes the authors described have proven in recent years not only to be dangerous to human life and damaging to habitats and landscapes, but also destructive to the economy. The supply chain disruptions that affected the vast majority of U.S. businesses in 2021 were due not just to the COVID-19 pandemic, but also to climate-related disasters. Interstate 1 along the California coast was shut down for over three months due to debris flows. And part of Interstate 70 - the only east-west highway in Colorado - was washed away and shut down for six months during 2020 and 2021 for repairs.

Now, with drought and climate conditions making more major wildfires and storms likely this year along I-70, Swain said it's time to invest in infrastructure that would be more resilient to the new climate reality.