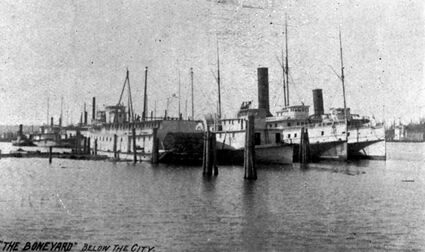 The notorious Oregon Steam Navigation Company "boneyard," covering the waterfront at the north end of the North End and stocked with old and dilapidated steamboats, as it appeared in an 1892 commemorative publication by the Portland Morning Oregonian.

This is the story of Portland's coldest cold-case file - a suspicious death in the worst neighborhood of the old Stumptown waterfront, almost lost in the mists of time, 135 years ago. Was it an accident? Or a murder?

We'll never know for sure. But there are good reasons to be suspicious.

Our story begins in a smoky, lamp-lit saloon in the rough part of Portland, back in early February of 1878. W.H. Harrigan, one of the tough, hardworking longshoremen who worked the docks in early Portland, was having a drink or two with his friend Thomas McMahon - known to friends and enemies alike as "Mac."

Mac was a scow operator on the river, in charge of one of the large flat-bottomed boats that helped shuttle cargo among ships in the harbor, and he lived in a cabin on board the scow.

Mac wasn't his usual free-spirited self that evening. In fact, Mac told Harrigan he was flat-out scared. He explained that he'd gotten in a fight with a man named Jack Abrahagen a week or two before, and Abrahagen had beaten him badly and then pulled a knife. Abrahagen was, at that moment, under arrest in the city jail awaiting trial for this deadly assault, and McMahon was worried that Abrahagen would come for him and finish the job, so that he couldn't testify against him. Would Harrigan be willing to come spend the night at his place, for protection?

Harrigan said he would. But as the night went on, the two of them proceeded to tax their capacity for intoxicating liquors. They did such a fine job of this that Harrigan was arrested for public drunkenness and thrown into the drunk tank.

It was the last time Harrigan would ever see McMahon alive.

The next day, Harrigan stopped by McMahon's scow to check on him, and found no sign of the man anywhere.

Alarmed, Harrigan kicked in the door of the scow. There was no sign of Harrigan, but all his belongings were still there in the scow - including, most alarmingly, $4.50 (about $105 in today's dollars) in cash.

"I then started for up town," Harrigan said, during the coroner's inquest that followed a few weeks later, "and after I had passed the house of Boneyard Mary she called to me and said McMahon had fallen in the river; that she saw him swimming; that she thought he had got out as someone struck a light in the scow."

"Boneyard Mary" was the nickname of a woman named Eliza Bunets, who lived on one of the old riverboats in the steamboat company "boneyard" - the place where old steamboats were moored after they were mostly worn out, in case parts were ever needed. Aesthetically, the boneyard was kind of like a combination of a junkyard and a haunted mansion, the whole thing floating on an occasionally evil-smelling river at the foot of Flanders Street, decrepit by day and, in those pre-streetlight days, positively sinister by night.

McMahon's scow was anchored right next to the boneyard, so he and Boneyard Mary were neighbors - but, it seems, not friends.

Boneyard Mary gave her occupation as "laundress," and, well, maybe she was. A careful reading of the newspaper accounts, though, suggests she derived most of her income in other ways.

Harrigan had no reason to disbelieve Boneyard Mary. He moved on, trying to convince himself that McMahon had simply gone on the lam to avoid being called as a witness against Abrahagen. But something about the whole thing bothered him, especially the money. Why would he leave his money behind?

Two weeks later, Harrigan's worst fears were realized. A young boy fishing off a nearby dock hooked and reeled in the unfortunate McMahon's corpse.

At the coroner's inquest, Harrigan told his story, and then it was Boneyard Mary's turn. She said the evening Harrigan was arrested, she was there when he arrived home for the night.

"I went inside the house and told (neighbor) Mr. Nelson and his wife that McMahon was very drunk," she testified. "I then stepped out on the wharf, and in a few minutes heard a splash in the water. I ran to the edge of the wharf and looked down in the river and saw an object in the water which I thought was him."

Boneyard Mary then went back to the house and notified Nelson and his wife that McMahon had fallen in the drink. Nelson promptly came out to help.

"Mr. Nelson went immediately on board the scow," Bunets said, "and found a hat saturated with water, and Mr. Nelson said he thought he had gone in the cabin and was all right."

A few other interesting things developed out of Bunets' testimony, though. First, Jack Abrahagen - the man arrested for beating and knifing McMahon - was, as it turned out, more than just her friend. He'd been living with her for several weeks before the fight broke out. She'd been smuggling letters to him in jail, slipped inside newspapers. And the two of them were engaged to be married.

Furthermore, she told the court, "I think the fight between (Abrahagen) and McMahon was about some bad words being said by McMahon about me."

Also, after McMahon disappeared, Bunets smuggled a letter to Abrahagen "stating that he need not be afraid now as 'Mc' had gone away."

Could it be that Eliza "Boneyard Mary" Bunets had something to do with McMahon's drowning that night?

Certainly Bunets had the motivation to do the job. She was 40 years old - an age at which a "working girl" in the 1870s couldn't look forward to many more years of plying the trade. She'd met a man who wanted to marry her - to make her a "respectable" married woman. Now that whole dream was being threatened by the prospect of attempted-murder charges. If Abrahagen were hauled off to the penitentiary, it was likely those wedding bells would go forever unrung.

The only way that could be prevented with absolute certainty, would be for McMahan to "disappear" before he could testify. And it's not hard to spin a not-too-fanciful theory about how she might accomplish such a thing.

Let's say, theoretically, that she sees Mac coming home drunk that night, and sees her chance. She slips over to his scow with a bottle, a smile, and maybe a little extra something to put in his drink - or maybe she just drinks with him and goads him into having more than he should, and he passes out. It would be the work of a few minutes to slip the unconscious McMahon into the river to quietly drown.

Then she dips his hat in the water, plants it on the boat and trots up the wharf to the Nelson house to fabricate an alibi. "Mac is very drunk tonight," she remarks, as if just making chit-chat, and then wanders back out again. She dawdles outside for two or three minutes, then hustles back in.

Nelson runs down to the scow and, as Boneyard Mary had planned (in our hypothetical scenario) finds the wet hat.

"Oh good," Boneyard Mary remarks innocently. "He must have gotten out."

The two of them talk it over and decide McMahon must have run off to Washington Territory to avoid testifying against Abrahagen, and they all go to bed. Boneyard Mary has her witness and her alibi. The currents of the river seem likely to carry the body out to sea and no one will be the wiser. Everything is going right according to plan ... until that pesky meddling kid fishes up McMahon's corpse and gets the cops involved.

Could this have been what happened that night? Maybe. Certainly it would explain why there was a wet hat on the scow even though McMahon never made it back aboard.

But we'll never really know. Because the Coroner ruled the death an accident, and that was the end of that.