Work will wind up at Walterville

Students to be back in classrooms this Fall 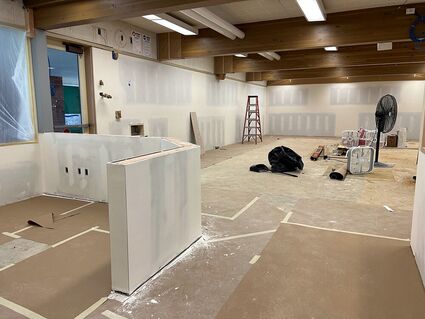 WALTERVILLE: The number of tradesmen's vehicles in the parking lot of the Walterville Elementary School should be tapering off soon. Brett Yancey, Springfield School District's Chief Operating Officer said the majority of the work is expected to be completed at the end of the summer. Subcontractors from McKenzie Taylor Construction are "putting the finishing touches on and we'll be ready to go well before the Fall," he said.

The building suffered extensive damage as an aftermath of the second time in 20 years floodwaters entered the structure. Unlike the high water event that occurred in 1996, last year's flooding was tainted with pollution from nearby septic systems.

During the decontamination and rebuilding process, crews removed sheetrock and insulation up to four feet above the school's floors. "If you looked inside the could see through the walls all the way down the hall," Yancey recalls. That work resulted in one benefit because previously a lot of wires and conduits had been installed on exterior surfaces as time went by. Now, all that sort of infrastructure has been relocated inside the walls.

Another big portion of the work has involved the replacement of all the built-in wooden cabinets, which had also soaked up contaminants.

The project's cost won't be determined until insurance claims are finalized but it's expected to be in the range of about $1.5 million.

What's sure, though, is that the 20-minute bus ride 146 Walterville students have been making to Mohawk Elementary will be over soon.