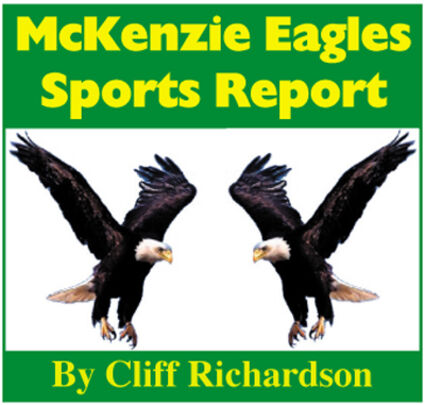 The McKenzie Varsity Track and Field Teams participate in the 1A - SD2 Special District 2 Championships held at the Aaron and Marie Jones Community Track, this Friday, May 13. Field events will start at 11:00 am and Track events will begin at 1:00 pm. Twenty-one District 2 Varsity teams are scheduled to participate.

Twenty-one Class 1A Varsity Boys and Girls Track and Field teams converge, this Friday, May 13, at the Aaron and Marie Jones Community Track venue. At stake is the opportunity to qualify for the OSAA State 1A Track and Field Championship Meet, which is scheduled for Thursday, May 19 and Friday, May 20, and held at Hayward Field, on the campus of the University of Oregon. This will be the final, and largest meet, this season, sponsored by the McKenzie Community Track and Field organization. Please plan to attend and enjoy a quality High School Varsity Boys and Girls Track and Field meet at one of the finest Track venues in the Pacific Northwest.

Several McKenzie Varsity Track and Field Boys athletes enter the 1A - SD 2 Special District Championships this Friday with top ten District marks. Sophomore Levi Lockard currently owns the District 2 third best Shot Put mark of 38 ft. 10 in. Greg Reedy of Days Creek has the District and State best mark of 47 ft. 0 in. Lockard will compete in the Discus holding onto the seventh best District mark of 103 ft. 5 in., but will again face a State best competitor, Ray Gerrard of North Douglas, who enters with a 145 ft. 11 in. best throw.

Eagle Trent Peek owns a fifth best District Javelin throw of 120 ft. 2 in., Lockard is sitting tenth at 117 ft. 6 in. and both will again face Gerrard who enters with the top District record of 144 ft. 8 in. Peek's tenth place Triple Jump mark of 32 ft. 5 in. follows Joseph Shepard of Mapleton who owns a current, State fifth best mark of 40 ft. 11.25 in.

The McKenzie 4x100 m. Relay team (Solomon Acevedo, Thomas Hayes, Griffin -Withalm, Peek) has the District 2 fifth best time of 50.30 sec., and the top time is held by Days Creek, 46.75 sec., which is also a fifth State best going in. Acevedo has run a District ninth best time of 2:33.39 min. and Logan Gant of North Douglas leads that event with a 2:12.93 min. best. Griffin-Withalm has run a 11.98 sec. 100 m. best and will be attempting to overcome District 2 leader Keith Gaskell of Days Creek, who enters with a State second best time of 11.31 sec.

The Triangle Lake boy’s team won the day with 104 pts., holding off second place North Douglas, which earned 100.5 pts. Host Crow finished third with 93.5 pts., followed by the Eagles in fourth with 87 pts, Mapleton, fifth with 35 pts., and Elkton sixth with 3 pts.

The Triangle Lake girl’s team also won their meet with a dominating score of 134 pts. North Douglas finished second with 100 pts., and Crow earned third place with 69 pts. McKenzie was fourth with 43 pts., and Mapleton was fifth with 15 pts.

The Eagle girls team was led by Adrian Caulley, who finished second in the Long Jump with a 11 ft. 4 in mark, third in the Triple Jump at 22 ft. 1 in., and sixth in the 100 m., finishing in 16.17 sec. Eagle teammate Rebekah Short set a personal record for herself in the Triple Jump, leaping 20 ft. 6 in. for a fourth place finish. Short also took home seventh place in the 200 m. with a time of 39.20 sec. McKenzie's Hailey Prater finished with the meet with a couple of third place finishes, 21 ft. 3 in. in the Shot Put and 78 ft. 11 in., in the Javelin, the latter mark a personal record. Prater also finished eighth in the Discus with a throw of 46 ft. 10 in.

McKenzie Takes On Class 3A Track At Pleasant Hill

McKenzie and Mohawk, both Class 1A teams, traveled to Pleasant Hill, last Wednesday, May 4, to tackle Class 3A opponents in the 3A - SD4 Track and Field meet. Class 3A teams Cascade Christian, Creswell, Harrisburg, La Pine, South Umpqua, Sutherlin, and host Pleasant Hill rounded out the competition.

Levi Lockard led his team at Pleasant Hill with a third place, personal record mark of 38 ft. 10 in. in the Shot Put event., a seventh place finish in the Discus with a 96 ft. 6 in. toss, and a ninth place finish in the Javelin, a stuck mark measured at 97 ft. 11 in. Eagle teammate Trent Peek finished sixth in the Javelin at 108 ft. 3 in. and Cody Morales finished twenty-third at 80 ft. 3 in., which was a personal best for the Eagle junior. Morales also threw the shot 27 ft. 2 in., another twenty-third place finish, and he took home twenty-second in the Discus with a 73 ft. 1 in. throw. In the Long Jump, Eagle Trent Peek tied for fourteenth at 16 ft. 0.5 in. and he was joined by teammate Thomas Hayes, who finished twenty-third with a leap of 14 ft. 10 in. Eagle Jamie LeClair set a personal record in the Triple Jump, 31 ft. 1 in., which was good for thirteenth.

The McKenzie foursome of Solomon Acevedo, Hayes, LeClair and Peek had the highest Eagle running event finish for the day and that came in the 4x100 m. Relay. The team ran the race in 51.52 sec., good for sixth place. Acevedo finished ninth in the 100 m., in a personal record 12.67 sec., and followed up with another personal record in the 200 m., finishing the race in a twelfth place time of 25.93 sec. LeClair's 28.27 sec., twenty-second place finish, also set a personal record for the Eagle athlete. Peek finished thirteenth in the 100m., running the distance in 12.76 sec., and he was followed across the finish line by Hayes, who was timed at 13.40 sec. LeClair ran the 400 m. run in a fifteenth place time of 1 min. 6.6 sec., and Hayes finished eighteenth in 1 min. 8.33 sec.