Some had feared they could be bird flu victims 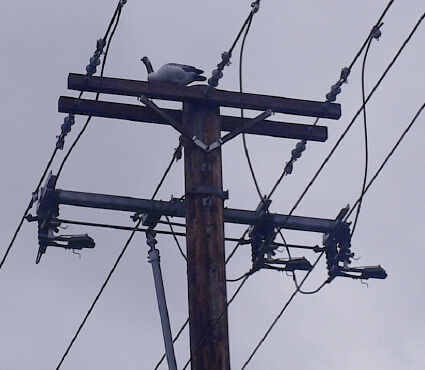 One of the goose decoys has been placed on top of a pole across from EWEB's Holden Creek substation.

Recently, some people have been wondering why what they thought were dead geese on utility lines weren't decomposing. Instead what they've observed is a Eugene Water & Electric Board program to discourage ospreys from building nests atop power poles that might cause fires or outages, as well as increase electrocution risks for the birds.

Birds remain committed to their sites year after year, which utility officials say can lead to very large nests that exceed the weight capacity of the pole and can create an unstable nest.

Those nests can also accumulate plastic debris, such as fishing lines, that present an entanglement hazard to the birds. In 2013, a baby osprey became tangled in a fishing line and was rescued by EWEB crews and Cascade Raptor Center staff after falling from its nest. 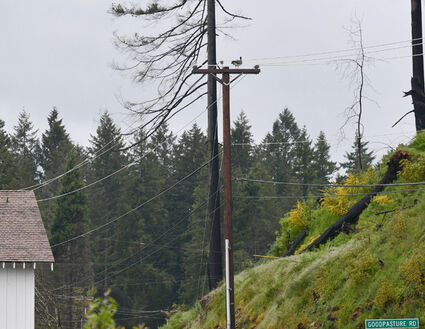 Another decoy near the Goodpasture Bridge.

Because EWEB has approximately 3,200 poles within a quarter-mile of the McKenzie and Willamette rivers, the utility has been providing both alternatives and deterrents.

As of 2020, EWEB had built 30 osprey nesting platforms throughout their service territory, some on existing power poles and some as standalone structures. During the most recent annual assessment, the utility found that 22 of the platforms were actively in use.

Another solution was to use decoys. Although "owl" decoys have been used to scare away smaller birds, they don't deter Ospreys. Other regional utilities have found Canadian Geese decoys work best for preventing the nesting problem.

Currently, decoys have been placed on poles near the Walterville Shopping Center, the Holden Creek substation and