Steamboat explosions on the upper Willamette 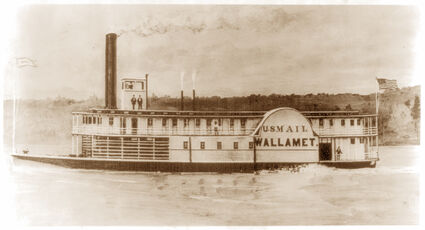 It was a peaceful, happy spring morning in the little river town of Canemah, situated just above Willamette Falls - or, rather, it started out that way.

It was April 8, 1854 - the very dawn of the steamboat era on the upper Willamette. Steamboats had been working the lower Willamette and Columbia for some time, but they'd only come to the upper Willamette three years before. The result, for Canemah, had been an explosion of growth. In those pre-railroad days, the rivers were the only way to get crops to market. The Willamette Valley was already producing a lot of crops, and all of it had to come downstream to Canemah - there to be unloaded, portaged around the falls, and loaded aboard another riverboat in Oregon City.

On this particular morning, though, that bucolic routine would be shattered with an event that historians are still not sure how to explain.

It was on this morning that the brand-new steamboat Gazelle, just a month old and built right there in Canemah, was to make its first regular voyage upstream to Corvallis. The riverboat was drawn up at the portage road, where goods that had been trucked by wagons around the falls were loaded aboard. Several dozen passengers climbed its gangplank and settled in for their journey. Then the captain rang for steam, pulled out into the river, and brought the big sidewheeler into the passenger dock, next to the slightly older sidewheeler Wallamet, to load the freight that hadn't come upriver from Oregon City.

Chief engineer runs for his life

As the big riverboat reached the dock, a man rushed up to the rail, vaulted over, lighted on the dock, and sprinted inland. He ran like a man being chased by a devil, with desperate speed. He did not stop. He did not look back. Soon he was gone from view.

Now, the chief engineer is the man who's responsible for a steamboat's engines. It's his job to keep the fires going and to adjust the amount of power in response to the captain's orders.

But the engineer's most vital job is to make sure there's enough water in the boilers at all times. If the water level falls too low, the boiler explodes.

Less than sixty seconds later, it happened. The Gazelle had two boilers, one for each paddle wheel, and they both exploded at the same instant with a powerful roar, sending steel and wood and bodies and body parts flying in all directions. Pieces of shrapnel from the explosion badly damaged the dock and the neighboring Wallamet and killed the Wallamet's pilot, J.M. Fudge.

The aftermath: Blood in the water

Canemah residents flocked to the docks and plunged into the water to help the scalded, wounded, mutilated passengers and crew members to shore. Many of them were already dead. Some of them were in pieces. The carnage was horrific.

The blast took the upper works off the ship but left plenty of debris in the open hull. Beneath that debris were even more bodies.

All told, 20 people died in the blast. Another 27 more were injured, some of them very badly.

The subsequent investigation wasn't particularly scientific - as would be expected for those pre-Civil War frontier days. The circumstantial evidence of the engineer's sudden flight, reinforced by the fact that he had never come to pick up his pay and had not been heard from since was seen as a tacit admission of guilt. Clearly, the investigators concluded, Toner had made a technical mistake and had only just realized it when the boilers started showing signs of imminent failure and, seized with terror, fled.

There were dissenting voices. Some steamboat men suggested that the boilers may have been defective - perhaps made of steel that was too brittle or thin.

Those doubters may have been right. Steam explosions were already all too familiar on American riverboats in the 1850s, which had led to the Steamboat Act of 1852 - requiring boilers to be tested and to be fitted with a pressure relief valve. But steam engines had to be purchased back East and shipped to the West Coast by sea, "around the horn" - so chances were very good that the Gazelle's boilers pre-dated the law.

It's also a bit suspicious that the only other boiler explosion in the history of the state at that time had also happened to an upper Willamette steamboat, named after the town of Canemah, at Champoeg the previous year. One person had died in that incident. And the upper Willamette was, in 1854, served by fewer than half a dozen riverboats, which represented a tiny fraction of steamboats in use in Oregon at that time. The sample size is too small to draw conclusions, but the fact that 40 percent of boats on the upper Willamette exploded was certainly a startling one.

The long-ago explosion of the Gazelle remains the worst disaster in Willamette River history as measured in casualty counts. But it wasn't the last. Three years later, the little steamboat Elk exploded in mid-stream as it approached the Yamhill River.

The explosion lifted the wheelhouse and smokestack off the boat and sent the whole work flying through the air - intact, with the boat's captain still inside. The wheelhouse miraculously landed on the top of a cottonwood tree, and the skipper was able to shinny down the tree to safety. While airborne and in free-fall (along with sextants, coffee cups, and whatever else was in the wheelhouse at the time) he'd actually been able to look through the smokestack at his pilot, who'd been blown onto the bank by the blast and was sitting there, dazed but unhurt, trying to collect his wits.

On that occasion, the passengers were shielded from the shrapnel by a heavy woodstove. A few of them were hurt, but none badly, and not a single person was killed. And for twenty years after that, every time they passed the tree that had broken the captain's fall and saved his life, riverboat pilots pointed it out and retold the story - something their passengers likely didn't find particularly reassuring.

But by the time of the Elk's disaster, new steamboat inspection laws were having their effect. Only one major boiler explosion happened on the Willamette after that, despite a massive increase in the number of ships on the river. That explosion was in 1875 when the steamboat Senator exploded while docking in Portland, killing seven people and injuring another eight. 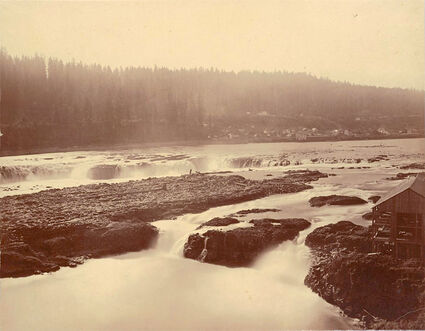 Finn J.D. John is an instructor at Oregon State University and the author of "Wicked Portland," a book about the dark side of Oregon's metropolis in the 1890s. He produces a daily podcast, reading archives from this column, at ofor.us/p. To contact him or suggest a topic: [email protected], @OffbeatOregon (on Twitter), or 541-357-2222.

This image from The West Shore magazine in 1887 shows the docks at Canemah after it had become part of Oregon City, after more buildings had been constructed; it's near the probable location of the portage road.