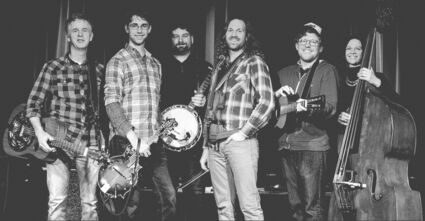 A progressive bluegrass band, Sugar Pine, will be delivering their unique takes on roots and bluegrass tunes along with an eclectic mix of original songs from the newly constructed stage in Vida this Sunday.

VIDA: What started as casual brainstorming among friends for ways to bring neighbors and tourists together has become Caddisfly Concerts, and the first show is slated for Sunday, June 26th. Three local bands will perform, from 1 to 5 p.m., at the Gate Creek Ranch in Vida.

Concert goers can expect high energy, family-friendly fun, and a variety of musical genres, organizers say. "Most folks in the McKenzie Valley had to bug out during the fire of 2020," according to Paul Dage. "Most are back to rebuild and there's a spirit here – resilient, forward-looking, and strong. What better way to celebrate that spirit than live, toe-tapping, hand-clapping music performed in a beautiful setting?"

Further emphasizing the community-building nature of the concert, proceeds from ticket sales are earmarked for helping rebuild the Vida McKenzie Community Center, which was destroyed in the Holiday Farm Fire.

Headliner Melissa Ruth and the Likely Stories, from Douglas County, will perform what she herself calls, "Doo-Wop Twang: The space of blues, the teeth of country, and the grit of rock 'n' roll." Ruth's most recent album, according to the Roots Music Report has, "A supercharged air of tight, bluesy rock in play on just about every track on Meteor, and the driving beat is a perfect setting for Melissa's deep, dark lyrics."

Neil Gregory Johnson, also from Douglas County, will be performing his own blend of folk, soul, and country.

"If the absolute thrill of organic, crisp, satisfying blues rock and roll is enough to raise you from your winter slump, the opening few moments of 'Three Days On The Wagon' from Neil Gregory Johnson's EP will have you flying high in an instant," says a review from Stereo Stickman, an online underground music magazine.

Also on the stage will be Eugene string band, Sugar Pine, bringing progressive bluegrass - ranging from "dark, haunting harmonies to soaring, electrically charged instrumental jams," according to the band's website. "An eclectic mix of original songs and unique takes on roots and bluegrass tunes create a high-energy force that will make you want to get up and dance," it adds.

The concert is sponsored by the McKenzie Valley Chamber of Commerce and the McKenzie Community Development Corp. Food and beverage will be available for purchase, including Mexican cuisine and local beer and wine. Ticket sales are limited and can be purchased ahead of time at CaddisflyConcerts.com.