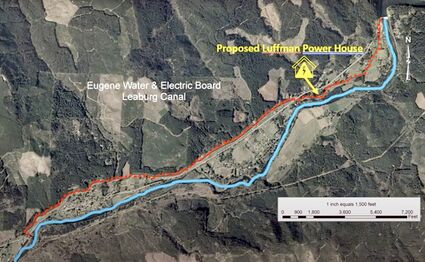 Located about 1 mile below Leaburg Dam, the proposed Luffman Power House could generate 6.2 megawatts of electricity as part of the utility's Alternative 3. The output compares to about 15.9 MW the project used to generate.

EUGENE: "This is probably the biggest decision you'll ever make on this board unless we have to hire another general manager," was the advice Eugene Water & Electric Board president John Brown had for the utility's commissioners on June 16th. Echoing that assessment at last week's meeting, John Barofsky said he wanted at least four hours blocked out in December for discussions that will determine the future of the Leaburg Canal.

At the core of those talks will be four options. At one end of the range is a plan that calls for total removal of the canal, dam, and other infrastructure. At the other end, EWEB could restore the whole project to the way it had normally operated before being shut down for safety concerns.

In between those endpoints are proposals to build a new, small hydroelectric plant or to stop producing any electricity and instead rebuild the canal to only route water from tributary streams over to the McKenzie River during storms.

Three issues - economic, social and environmental have been identified as a "Triple Bottom Line" for the utility.

Rate impacts, capital costs, the facility's net and hydropower values are all part of the economic considerations.

Some of the environmental issues under the TBL were climate impacts, water and air quality, as well as aquatic resources.

The upfront costs associated with decommissioning - or a full return to service - could amount to $250 million. Building a new powerplant or opting for a stormwater conveyance was expected to tally up to close to $180 million.

General manager Frank Lawson said that in conversations with other utilities he'd asked what they'd expect if they had a hydro plant similar to the size of Leaburg. Most said they'd expect a plant that could generate from 50 to 100 MW, far short of the 6 MW for the Luffman plant or the 16 MW a refurbishment would put out.

Brown argued decommissioning the whole project might balloon to costs three times as much as returning to service. He suggested that approach was unlikely and should be dropped from consideration.

Commissioners Sonya Carlson and Mindy Schlossberg stopped the idea from becoming a motion by arguing the public had been told total removal was one of the alternatives EWEB would seriously consider.