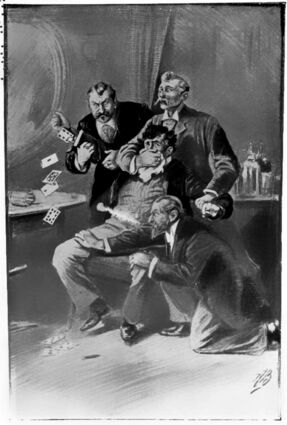 This drawing shows a famous card game in 1888, when a group of professional crooked gamblers pounced on one of their party, P.J. Kepplinger, after realizing he had a new and highly effective device for cheating. After Kepplinger agreed to make one of his devices for each of his captors, they all got back to playing cards as normal; today this device, known as a "Kepplinger holdout," is one of the most sought-after cheating devices for modern collectors of such artifacts.

J.P. was the dashing 22-year-old son of a railroad executive. In St. Louis, he'd been running amok in the saloons and "faro banks," getting into lots of high-spirited trouble with fast women and irresponsible friends. His father, wanting to get him away from the company he was keeping, had come up with a scheme to send him off to what he no doubt considered the soberest, hardworking, Little-House-on-the-Prairie-like place on Earth: Oregon. So he pulled a string or two, got the young rake a job as a sales rep for Hammer Paint Company, and loaded him on a train to Portland.

Had J.P.'s father known what awaited his boy in the City of Roses, he would sooner have delivered him directly to the penitentiary – where he very nearly ended up anyway.

Upon arrival, young J.P. checked into the posh and brand-new Portland Hotel, pulled on his kid gloves, donned his silk hat, and immediately headed out in search of a good saloon where he could play his favorite game of chance: Faro.

As you can well imagine, he found one soon enough.

Within a week, Portland's crooked gambling pros had thoroughly "fleeced the darling tenderfoot," as the Portland Evening Telegram put it. J.P.'s was a textbook fleecing, with the dealers allowing him to enjoy the usual run of early success to set the hook, then reeling him in with an uneven but prodigious string of carefully engineered losses, until he was flat broke, and sending him on his way.

That's when young J.P. crossed the line that would lead to a very close brush with a prison sentence. Desperate to win his money back and blissfully unaware of the fact that the game was rigged, he found a railroad executive, dropped his father's name, and persuaded the poor fellow to cash a draft against the Hammer Paint Company's bank account.

That got him back to the tables for another round of financial drubbing. Then, when that money had all been swindled away, he did it again with another Portland businessman and another.

But by that time, the first check had bounced, and a detective was out looking for Cochran – and he knew just where to find him. The young fellow was found sitting at a faro table, bareheaded and coatless in the grim December weather; he'd pawned his silk hat and frock coat for a few extra dollars to gamble with. All he had left in the world were the clothes on his back and $15 worth of faro checks (like poker chips) on the table in front of him.

He was taken directly to jail.

Old Man Cochran dropped everything and raced for Portland to save his son from the penitentiary. He had to do some very fancy legal footwork to do that. After all, the young rake had swindled three different people out of large sums of money.

It had all been a terrible misunderstanding, he assured the prosecuting attorney. The president of Hammer Paint had been marooned on a Caribbean island, out of contact with the world, and therefore unable to get word to his employees that young J.P. was authorized to play cards with the company's money.

"I am convinced my son had no idea of swindling anyone, because he supposed his drafts would be honored," the elder Cochran said.

Whether the prosecutor bought this whopper or not is impossible to say, but he decided not to press charges, and J.P.'s father was allowed to collect his son and slink out of town on the very next eastbound train.

"I am not at all sorry he was arrested," the elder Cochran told the Telegram reporter as they left the courthouse. "In fact, I rejoice that he was put in jail, where I had a notion of permitting him to remain for a while longer. He has been taught a severe lesson, and a good one."

And with that, off they went.

J.P. Cochran's was not an isolated case. In the last two decades of the 19th century, Portland was something like a Venus flytrap for fellows like him. For a certain kind of person, the town was like one big sucker-milking machine.

The saloons and gambling dens of Portland offered dozens of games through which fools could be separated from gold. But the hands-down favorite in Portland and across the West in general was J.P. Cochran's favorite game – faro.

Faro was a crooked gambler's dream game. This game, reputedly of Italian origin, involves a dealer pulling cards two at a time out of a specially-built dealing box.

There were so many ways to cheat at faro, and they were so hard to detect, that around the turn of the century a frank and explicit warning was added to Hoyle's rulebook to the effect that all faro games should be considered crooked.

"If Faro were honestly played, it would be one of the prettiest banking games in the world," wrote Hoyle's editor Robert Foster, in the 1909 edition. "But unfortunately the money to be made at this game is so great that the richest prizes in the gambling world are offered to the men who can so handle the cards as to "protect the money of the house."

To do so, faro dealers used special "gaffed" dealing boxes, elaborately and intricately built to cheat the players and all but undetectable in use. Author John Maskelyne, in his book, goes into great detail about how these boxes are built and how they work.

But in a way, the widespread cheating was understandable. That's because faro offers such a slim "house edge" that for a gambling establishment, running a "square game" is not only unprofitable but dangerous. Faro is only profitable if you cheat, and if you don't cheat, it's statistically possible for a lucky player to go on a bank-breaking run and put you right out of business.

That's why, although it was the most popular game of chance in the late 1800s, it's almost impossible to find a game in the highly regulated gaming environment of Las Vegas today.

But in the gambling houses of late 1890s Oregon, there was no regulation, and gamblers were on their own to figure out if a saloon was crooked or straight. No one – except maybe an expert faro dealer –could spot a well-built gaffed box in operation. So at the faro table, any gambler was simply at the mercy of the dealer. 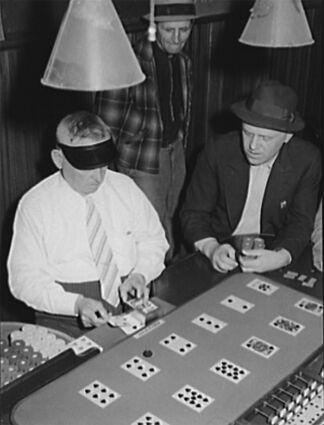 For young J.P. Cochran, back in St. Louis where the dealers all knew who he was, that had worked in his favor. They could, and almost certainly did, cheat just enough to take more money than they gave up so that he would come back night after night trying to get ahead – literally using their cheating power to protect him from crushing losses so as not to discourage him from returning the next night. They knew better than to bust him down to bedrock.

But in the brand-new, wide-open city of Portland, where he was just another wealthy, cocky stranger, all those bets were off.