Nine shovels dug in at launch of McKenzie Gateway Sign 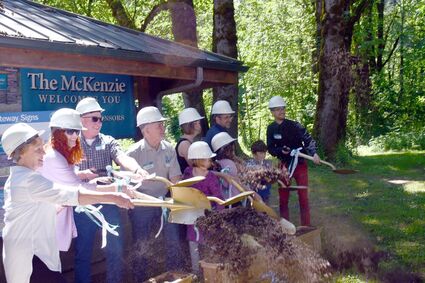 Lane County Commissioners, McKenzie River Chamber of Commerce board members, business leaders and area residents all joined in at Hendricks Park last Thursday to celebrate start of construction for two "McKenzie Gateway" signs. The signs - at each end of the Valley - were designed to help the McKenzie area as a tourism and business hub and help in the revitalization of the area after the Holiday Farm Fire in September 2020.

For the past several years, the McKenzie River Chamber of Commerce Tourism Committee has been working on a project to develop branded signage along the McKenzie Highway. These signs would designate the area as an economic and tourism district.

In August of 2020, the McKenzie River Chamber of Commerce approved a design for new welcome signs to be installed near eastern and western entry points to the McKenzie River Valley. One of the sites will be near the Hwy. 20/Hwy. 126 on the Pass. The other is planned to be placed near Walterville's existing community sign.

The double sided structures - at 20 ft. wide and 15 ft. tall - would also be illuminated to increase their readability for travelers. Now more than ever, the Tourism Committee and its partners believe the gateway signs will have even greater significance as a way to help encourage and give hope to communities and residents as they rebuild following the devastating Holiday Farm Fire.

The groundbreaking marked the beginning of the construction phase of the project and kicks off the timeline for completion of the two gateway signs.

It is planned that the new signs will be completed by Labor Day in 2022, marking the two-year anniversary of the Holiday Farm Fire.