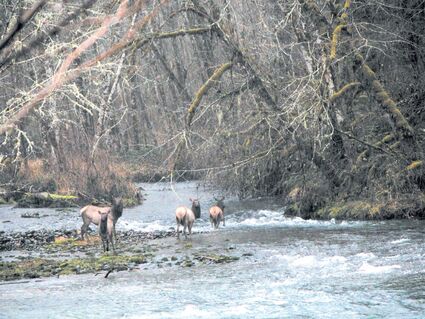 Powering across the McKenzie River at Silver Creek wasn't a problem for a herd of elk. Deer, though, are the most frequently seen mammals taking advantage of areas where large wood deposits occur in waterways.

Until the 1980s, pulling logs and trees out of streams was widely promoted across North America. Today, millions of dollars are invested every year to put sections of large wood back in streams. Supporters of the new approach say important benefits include the geomorphology of channels, stream discharge, sediment deposits, and habitat for fish. Yet, little is known about the role of large wood in streams for wildlife ranging from birds to large mammals.

Recent research results from studies conducted by two Oregon State scientists has documented wildlife and animal activities at several log complexes along Rock Creek, a Willamette River tributary just west of Corvallis. On the HJ Andrews Experimental Forest in Blue River, Ezmie Trevarrow and Ivan Arismendi did a similar study of large 30 wood crossing areas, expanding the number of sites to about 30 along Lookout Creek. "We focused in summer only for logistical reasons of access to change batteries regularly," according to Arisemdi.

Over a 12-month period, their motion-triggered cameras documented up to 40 species including small mammals, aquatic and terrestrial birds, large carnivores, and semi-aquatic mammals. The most common animal activities included movement (68%), rest (18%), and food handling/eating (9%). Those results, they believe, suggest that large wood structures in streams act as lateral corridors connecting terrestrial habitats year-round for wildlife.

Before the 1970s, land managers, recreationists, and the public considered large wood in rivers as undesirable and the removal of wood from streams was extensively promoted across the United States. However, the scientific and managerial perception of large wood in streams has changed over time. 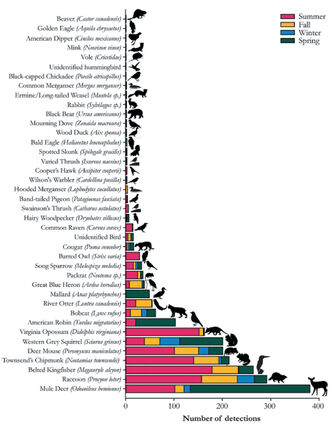 Mule Deer were the most seen visitors at stream crossings, while beavers were rarely observed.

Mirroring the McKenzie River region, part of the Rock Creek basin is managed to provide drinking water to the city of Corvallis. In 2008, large wood structures were placed in the mainstem Rock Creek as a restoration effort to recruit gravel, increase channel complexity, promote winter food-plains, and create habitat for salmonids.

Among their 2,191 animal activity detections, the researchers detected some unexpected species and activities. One was the image of a Golden Eagle, which is rarely seen in the Willamette region. In addition, two Mule Deer were observed being swept away after attempting to climb onto a log complex during a high flow event.

"This study reveals a hidden role of large wood in streams," said Trevarrow, who conducted the research as an undergraduate in the Honors College at Oregon State and is now a research associate at the University of Georgia. "The findings are valuable for land managers because they demonstrate additional value of restoration projects that involve wood placement into streams."