Ash borers - a threat to Oregon

Destructive pest is now in 35 states 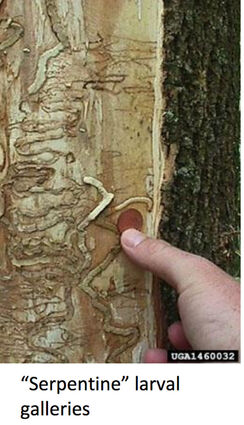 The long-anticipated arrival of the destructive emerald ash borer (EAB) has sharpened concerns about the impacts to Oregon’s urban forests, wetlands, and streams.

Wyatt Williams is the Oregon Department of Forestry’s Invasive Species Specialist. For the past couple years he’s been managing a federal grant to try and save the gene pool of the state’s only native ash species ahead of a pest that could wipe it out.

“Since it was first found in the Detroit, Michigan area back in 2002, EAB has become the most destructive and costliest forest pest ever to invade North America,” said Williams. “This little insect (it’s only half an inch long and an eighth of an inch wide) has spread to 35 states and five Canadian provinces, killing up to 99 percent of their ash trees in some locations. At least five ash species native to the central U.S. have become critically endangered as EAB spreads across the country killing hundreds of millions of urban and wild ash trees.”

Within a decade of EAB’s arrival in an area, most ash trees die or are dying. Oregon ash (Fraxinus latifolia) is a deciduous hardwood tree found most commonly in wetlands and along streams.

“It’s an ecologically vital tree as it shades water, keeping it cooler for fish. The roots stabilize streambanks, reducing erosion. And lots of animals, birds and insects eat the seeds and leaves. Losing it will likely have a huge impact on those ecosystems,” Williams explained.

“ODF has used the advance notice that EAB was heading west to gather up seed from throughout Oregon ash’s range in the state,” said Williams. “The first goal is to try and preserve as much of the tree’s genetic diversity as we can before it’s lost. The U.S. Forest Service’s Dorena Genetics Resource Center in Cottage Grove stores the ash seeds and is sharing them with researchers. The researchers will test for any resistance to EAB. If any is found, we might then be able to breed resistance into local strains and replant streambanks.”

“The state has been warning communities for years to prepare for this pest and has plans in place for dealing with the loss of ash trees,” notes ODF’s Urban and Community Forestry Assistance Program Manager Scott Altenhoff. He recommends three things to do this summer, if possible.

“First, if it hasn’t been done already, inventory trees to see how vulnerable the local urban forest is to losses from emerald ash borer. We have a common software called TreePlotter that’s free for communities to use. As data come in from around the state, it will give us a common picture of where all the vulnerable urban trees are,” said Altenhoff.

“Second, now is a good time to remove ash trees from approved street tree lists as has been done in Portland. Olive trees, which are in the same family as ash, can also be vulnerable,” he said.

“Finally, consider how wood from ash trees that die from emerald ash borer might be used locally,” Altenhoff said. “There may be opportunities to help local woodworkers and artists and keep the wood from going to waste. But it is crucial that people not move ash or any other wood beyond their local area. That avoids people accidentally spreading wood-boring pests faster than they would otherwise.”