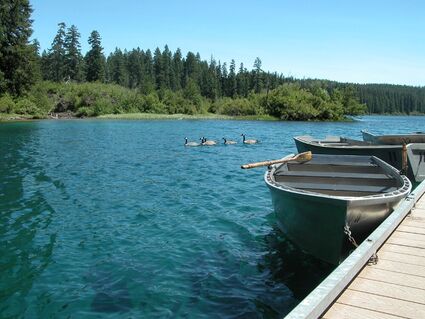 While some parts of the state benefitted from a wet spring and early summer, areas still remain in significant drought (including southeast Oregon and parts of southwest, central and northeast Oregon). The extreme temperatures and heat this week, officials say, will exacerbate drought conditions.

During a drought, fish like Oregon’s iconic salmon and steelhead face even more challenges, as low water can strand them and makes migrating to the ocean even more difficult for juveniles. Meanwhile, adult fish returning to their home rivers may struggle to survive in warm water temperatures and can fail to complete their life cycle to spawn the next generation of fish.

With food and water scarcer, birds and mammals as well can become weaker and they're young less likely to survive. Female mule deer may not get enough forage to feed their young, so fewer fawns survive.

No one can control the weather, but everyone spending time outdoors can take steps to reduce the unintended impacts of recreation on fish, wildlife, and their habitats during drought.

Habitat can be negatively impacted by careless users off-trail. Bikers and hikers are encouraged to stay on trail and limit leaving trails to only when necessary. ATV/UTV users should avoid driving on or through streambeds (wet or dry) as it permanently damages the habitat. Remember to keep your dogs on leash and on trails to limit disturbance to wildlife sheltering nearby.

Summer is a peak time for outdoor recreation in Oregon and spending time on and around water is a common pastime. Be considerate when swimming, boating, paddling, and fishing as human presence is more stressful for fish during drought. Consider fishing in the mornings and evenings when the weather is cooler. Try to reel in and release fish quickly to avoid exhausting them before letting them go. Try swimming in larger water bodies where fish and other critters aren’t congregating for refuge. More fishing tips.

Remember that you are sharing the outdoors with the wildlife that call it home and they are more sensitive to visitors in their ‘home’ when in drought conditions. Try to camp away from waterholes, rivers, and streams as your presence may scare wildlife away from a needed drinking source. Try limiting your noise levels to avoid scaring wildlife away from the important habitat they need during drought.

Summer in Oregon is a great time of year to spend outside but consider recreating in alternative places where recreation has less of an impact on fish, wildlife, and habitat during drought. Try fishing for warmwater species that are less sensitive to the heat of summer or for trout in the high mountain lakes where water temperatures