After frontier murder, suspect was auctioned off as a temporary slave 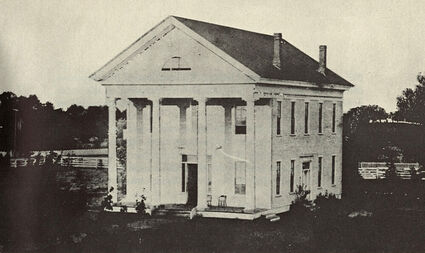 The Polk County Courthouse as it appeared in 1859. It was one of the second-story windows on this building that Enoch Smith leaped out of in a desperate attempt to escape from custody and avoid a death sentence.

In the first month of 1852, everyone in the frontier community of Cynthian was talking about the big crime wave.

Well, it was big by frontier Oregon standards. Although it was (and still is) the seat of Polk County, Cynthian - which was renamed Dallas later that same year - was a tiny place, with no more than a few hundred residents.

But, it seemed, one of those few hundred people was a burglar and had hit three different homes over the previous few months.

Folks around Cynthian had a suspect in mind, or at any rate, they later claimed they did. Their suspicions centered on a laborer named Return Everman.

Return Everman and his brother Hiram were new arrivals in town, having traveled to Cynthian on the Oregon Trail the previous summer, and were living with the Goff family on their homestead claim as hired hands. The community's impressions of the two were mixed - everyone seems to have gotten along very well with Hiram, but Return had a more squirrely reputation.

So nobody was very surprised when, in January of 1852, Return was spotted sneaking out of Cyrenius C. Hooker's farmhouse when the family was away. And when Hooker came back home and found that the unknown burglar had struck again, he was not slow to point the finger at Return Everman.

There wasn't any proof. Everman, it later turned out, had hidden the pocket watch he'd stolen from the Hooker home under a log by Rickreall Creek, and he stoutly denied having done the burglary.

But Hooker didn't back down. And Everman was afraid to back down. He figured that most of the community believed him to be innocent, but he thought if he tried to patch things up with Hooker, they'd interpret that as evidence of a guilty conscience and turn against him.

So he decided it would be best if he just went ahead and, well, murdered him.

"I would rather the news would get home that I had killed a man for trying to injure my character, than for news to go home that I had stolen a watch," he wrote later, in his written confession.

Having decided to do this, he started talking about it very openly. He told his brother Hiram, as well as Samuel Goff (his boss, the owner of the farm at which he and Hiram were living and working) and another friend named David J. Coe. Nobody seems to have taken the threat seriously, though.

A few weeks went by, and a group of the neighbors decided to put together a party for a journey south to the gold fields - the gold rush was still in full swing in '52, of course. Hiram Everman was going with them, along with Goff and Coe ... and Hooker. Because Hooker was going, Return Everman refused to join them.

One of the other men joining the party was a Yamhill County man named Enoch Smith. There was no love lost between Hooker and Smith, and when Smith heard Return Everman bragging about his plan to murder Hooker, Smith urged him to go for it and offered to pay him $250 if he did. At that point Hiram Everman, Return's brother, broke in and told Smith to shut up and keep his money to himself. The whole exchange was witnessed by several of the others - nobody made any attempt to keep it secret. Most likely everyone thought it was all hot air, just a couple of big-talking men bragging.

Everyone, that is, except Return Everman, who decided that with Hooker on his way to the gold fields it was now or never. So on the morning of Feb. 12, as all the members of the party of prospectors packed for the road, he hurried off to a friend, borrowed a shotgun, and went to Hooker's farm with it.

Hooker was plowing a field when Everman arrived. Why he was plowing the field on the morning of his departure, in the middle of a soggy Oregon February, isn't clear; perhaps he had hired someone to work the land for him and was getting it ready. In any case, that's what he was doing, so Everman stole around into a rail pen at one end of the field, hunkered down, and waited for Hooker to reach him.

When Hooker did, Everman shot him in the back with the shotgun.

He then hurried over to his victim, who, recognizing him, started begging for his life and promising never to say another word about the watch. But Everman, according to his later confession, thought that having started the job, it would be best to finish it; so he pulled his pistol and shot Hooker in the head with it.

Then he headed back to the Goff house.

He found it empty. Everyone was already on the road, including the man Everman had borrowed the shotgun from. So he hurried after the party and caught up with them at their camp, at the end of the day's ride, and returned the shotgun.

"Where have you been?" someone asked him, and Everman replied that the deed was done, and Hooker was dead.

That must have been quite a shock, as all the people Everman had been bragging to for weeks about his murderous plans suddenly realized the man had been serious about it.

Enoch Smith may have been just as shocked as everyone else, although the Oregon Statesman reports that he displayed "the most fiendish satisfaction" at the news; but in any case, he did give Everman $250. Everman, in his confession, said it was a loan, not actual blood money; but it certainly didn't look very good when it inevitably ended up in court.

Because of course it ended up in court. Nobody as incompetent as Return Everman could possibly last more than a day or two on the lam with a posse on his track. Nobody was willing to go with him, either - brother Hiram included, although Hiram did help him out with a fresh horse. Finally David Coe agreed to go along, and the two of them headed south as fast as they could.

But, of course, it wasn't fast enough. Word of the murder spread through Cynthian just as fast as you would expect such news to spread, and the overwhelming majority of the neighbors were outraged by it. A posse quickly formed, rode to the prospectors' camp, and brought them all back to Cynthian.

Asked if they'd seen Return Everman, Enoch Smith and brother Hiram said no; but someone else in the party apparently decided this was going too far, and spilled the beans. So the posse lit out again on fresh horses, and after 60 hours of hard riding caught up with the two fugitives staying with a farmer in Roseburg.

Back in Cynthian, the fugitives were lodged in an upstairs room in the county courthouse - Polk County didn't have a jail yet. Both the Everman brothers, along with Enoch Smith and David Coe, were put in leg irons under guard there. Return Everman, of course, was charged with murder; the others were all charged with being accessories before and after the crime.

Of the four, only one "copped a plea" - Hiram Everman pleaded guilty to being an accessory after the fact, for lending Return a horse, and the other charges were dropped. Then David Coe was tried, found innocent, and released.

That left Enoch Smith and Return Everman himself.

Return's case came up first. It was over rather quickly, and he was sentenced to be hanged.

Smith's case was more complicated. Lending Return Everman $250 after having offered to pay him that same sum as blood money, in front of witnesses, looked an awful lot like a murder-for-hire put-up job, which, of course, was definitely a hanging offense.

But one of the members of Smith's jury balked. The juror believed him to be guilty, but thought the death penalty morally indefensible and refused to be a part of sentencing someone to hang. A new trial would have to be scheduled.

This brush with death scared Smith badly. In desperation he tried making a break from the "jail," jumping out of the two-story window when his guard was getting a drink of water; but he hurt himself too badly to run, and was soon recaptured. Back to court he went and was found guilty. He was sentenced to be hanged a week after Return Everman.

But it was not to be. Return Everman, a day or two before his hanging, wrote a full confession giving complete details of who did what - and completely exonerated Smith in it.

The confession changed the community's sentiments completely. Everyone figured Everman had no reason to lie at that point, just days away from Eternity. Smith's hanging date was postponed a couple of times, and finally, the territorial governor pardoned him.

But probably the most interesting story from this early Oregon murder drama was that of brother Hiram Everman. Hiram, having entered a guilty plea, didn't go on trial; they simply sentenced him to three years in the penitentiary. There was just one problem, though: Oregon didn't have a penitentiary yet.

So in lieu of incarceration, Polk County literally auctioned Hiram off as a temporary slave - an indentured servant on a three-year contract. He was purchased by Theodore Prather, a farmer from the Buena Vista area.

Hiram reported stoically for his term of service to the Prather. He must have been an extraordinarily hard worker, because when, two years into his three-year sentence, he was pardoned by Governor George Curry, Prather didn't hold the loss against Hiram. Instead, he shook Hiram's hand, slipped $20 into it, gave him a horse and a saddle, and wished him all the best. (He did petition the county commissioners for a refund of the unused portion of his sentence, though, after Hiram left. But the commissioners voted to keep his money.)

Hiram ended up down in the Myrtle Creek area of Douglas County, where he settled down, started a family, and enjoyed a blissfully crime-free life.

(Sources: "The Murder of Cyrenius C. Hooker," an article by Thomas Branigar published in the December 1974 issue of Oregon Historical Quarterly; "Back to the Past: No jail? Auction the prisoner," an article by Scott McArthur published July 13, 2021, in the Polk County Itemizer-Observer)