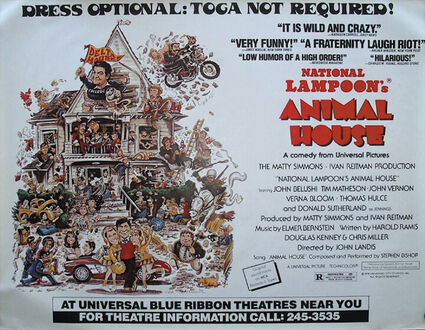 A movie poster for Animal House.

In this third and final part of a 3-part series on iconic Hollywood films shot in Oregon, we'll talk about six films rather than five. Our survey ends, rather arbitrarily, with the end of the 1980s, at the dawning of the Gus Van Sant era of filmmaking in Oregon (and particularly in the Portland area).

This lightweight, feel-good Gold Rush Western comedy was Disney's most lucrative hit of the 1970s, and it was genuinely funny. Critics didn't quite know what to make of it - most of them clearly felt it was low-quality stuff, but I don't think there was a single child who saw this movie and didn't love it.

In this flick, a roving gambler wins a bunch of stuff in a card game, then discovers to his dismay that it comes with three orphan children. The kids subsequently find a huge gold nugget and suddenly everybody wants to adopt them. There's a gang of good bad guys - the Apple Dumpling Gang, a pair of serial bumblers played by Knotts and Conway - and a gang of bad bad guys - led by the one and only Slim Pickens. To foil the bad bad guys, the kids have to help the good bad guys steal their nugget from the bank where it's being held for safekeeping.

Several scenes in The Apple Dumpling Gang were shot in particularly picturesque parts of Deschutes County, near Bend.

The Shining is one of the great masterpieces of supernatural horror. Its initial reception was a little shaky, but history has been very kind to it and today it's a vital part of pop culture.

The most significant connection to Oregon in The Shining is Timberline Lodge, which stands in for The Overlook Hotel - although most of the interior shots of the movie were done on movie lots.

In this movie, writer Jack Torrance takes a job as winter caretaker at a magnificent haunted hotel called The Overlook, which is closed and snowed in every winter. Jack's son, Danny, has psychic abilities and starts having frightening visions. Jack gets crazier and crazier as Danny starts chanting "Redrum" and channeling a spirit named Tony, and eventually, egged on by the ghost of the previous year's caretaker, Jack suffers a complete mental breakdown and sets out to murder his wife and son with a fire ax.

This movie is to the University of Oregon what the exploding whale story is to the town of Florence: It's an open question whether the fame of having hosted such an iconic event outweighs the notoriety.

The UO wasn't the producer's first choice, but at every college that looked right, administrators took one look at the script, blanched, and ran for the door. But the UO's president, William Boyd, had been down this road once before. When he was a senior administrator at one of the California colleges, he turned up his nose at an offer to host a movie, and thereby lost the chance to provide the backdrop for The Graduate, which went on to become a timeless classic. Apparently not wanting to make the same mistake twice, he green-lighted Animal House.

The movie was filmed on and around the UO campus. The scene with the dead horse was actually filmed on location in the real dean's office in Johnson Hall; the famous food fight scene was shot in the Erb Memorial Union "fishbowl"; the house itself was a ramshackle place on East 11th Street, and some of the interior scenes were shot in the Sigma Nu house next door to it. The homecoming parade was in downtown Cottage Grove.

This movie, a Steven Spielberg story and one of the most successful productions of 1985, was a huge event for the city of Astoria; the storyline was set there, and it was filmed on location. In it, a gang of kids living in the "Goon Docks" neighborhood of Astoria sets out on an adventure following an old map claiming to lead to the lost treasure of "One-Eyed Willie the Pirate." They end up in an abandoned seaside restaurant where a family of criminals is hiding out. Trying to escape from the bad guys, they stumble onto a cavern that leads to One-Eyed Willie's hideout - but the criminals are hot on their trail ....

Except for the cavern scenes, almost the entire movie was shot in Astoria - a town that's rather well known for pirate-treasure legends, it must be said - and at other spots along the northern Oregon Coast. The scene in which the Fratelli gang breaks out of jail is filmed in the old Clatsop County Jail, which - 25 years after the movie was made - became the Oregon Film Museum.

The reviewers all call this movie a "coming-of-age story," and they're mostly right. The idea is, that the narrator is remembering an adventure he and some friends embarked on back in 1959 - a quest to find the body of another kid who'd been hit and killed by a railroad train.

The movie is set in the quasi-fictional town of Castle Rock, Oregon - in real life there is, of course, a Castle Rock in Washington, but none in Oregon. In the movie, the town of Brownsville stood in for Castle Rock; the junkyard scene was near Veneta, and the railroad tracks along which the boys journeyed were the old Oregon Pacific and Eastern railroad lines out of Cottage Grove. (By the way, when this movie was shot, the "Blue Goose" excursion steam train was still running on those tracks on weekends. Today the track has been taken up, and the railway right-of-way is known as the Row River Trail.)

The movie follows two couples who steal prescription drugs from pharmacies (this was long before prescription-drug abuse was a mainstream issue). Their leader, Dillon's character, is highly superstitious, and eventually, his luck runs out.

Drugstore Cowboy more or less marked the beginning of the Gus Van Sant era of filmmaking in Portland. It would be followed up with several more from Van Sant and would inspire a generation of filmmakers in Oregon (and in particular, Portland), who would power a surge of high-quality movies over the following dozen or so years - as well as a few more pedestrian ones. 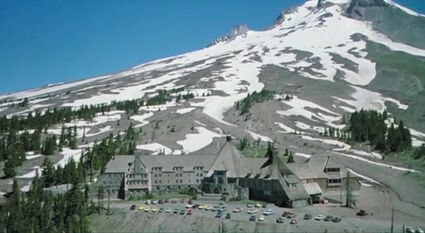 This shot of Timberline Lodge, as "The Overlook," is at the end of the credit sequence for The Shining.

Van Sant's success wasn't so much the start of Oregon's top-shelf independent filmmaking as its coming to national attention. This resulted in a flurry of attention from mainstream filmmakers in the 1990s and early 2000s, and although cheaper locations like Vancouver, B.C., and Atlanta, Georgia, have captured much of that market, the Beaver State remains one of the country's hottest hot spots for independent filmmaking today.