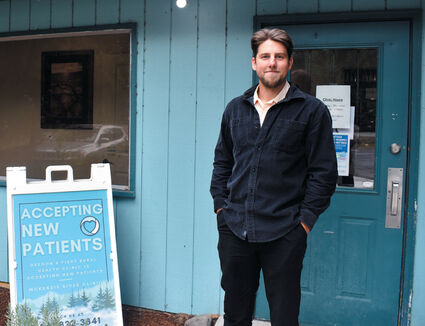 RAINBOW: Civilian, conservation, and corps were the 3 C's of the New Deal work relief program that left its mark locally by constructing trails and structures that are still in use today.

Challenging is a word often applied to health care in America. In rural areas, it has become even more appropriate. Over the few years in the McKenzie River Valley, that word has sometimes felt inadequate.

Optimism was high in 1977 when a nonprofit named the McKenzie River Clinic began offering primary health care to residents. That seemed to be a workable plan for several decades. Administrative costs, computer expenses, and equipment purchases - as well as changes to insurance reimbursements - all ballooned by 2019 when the organization's annual report explained its endowment was being depleted at an unsustainable rate.

Estimates warned the clinic would need to generate six times the amount of donations it had been receiving from individuals. Those issues caused the clinic's board to search for a potential partner to take over operations.

"When I looked at rural health clinics across Oregon, I saw a clear trend," according to Val Rapp, president of McKenzie Valley Wellness. "Independent clinics like our own McKenzie River Clinic used to be common in Oregon. By 2018, they were either shutting down or joining forces with a hospital or a group of clinics owned by a larger company. Towns bigger than Blue River - like Oakridge and Yachats - were left with no health care at all for sometimes years, when their clinics closed."

Luckily, they believed they'd found a good match with Orchid Health, which had grown out of a 2014 school project at the University of Oregon's business school. Orchid (Oregon Rural Community Health Innovatively Delivered) was the brainchild of students Orion Falvey and Oliver Alexander. After graduation, they turned their ideas into a pilot project for rural health care in Oakridge.

Falvey and Alexander said at that time their operation could benefit rural communities where more than two-thirds of Oregon residents' health care needs were not being met.

After the McKenzie River Clinic changed its name to McKenzie Valley Wellness, the medical practice - including the furniture, equipment, and supplies - was sold to Orchid, which was then operating clinics in Oakridge and Estacada.

"When we took over we felt the McKenzie River could be a great fit to the Orchid mission," Falvey says. His company's strengths he says, centered around knowledge of data files, administrative organization, and payment models, as well as having two operational sister clinics.

Orchid was operating locally in January and COVID hit in March, severely impacting what was hoped would be a smooth transition. Adding to that disruption was the Holiday Farm Fire that burned the building that housed the medical practice in Blue River.

"We met as an organization and decided how we could better prioritize our people and offer additional PTO (paid time off)," Falvey remembers. After the fire, "the McKenzie team was told to take as much time off as they needed to get their lives in order and still get a paycheck."

While that was going on Orchid was able to continue providing local health care by bringing a fully equipped mobile medical clinic to Rainbow. As patients were being treated on-site, work was underway to convert the former Rustic Quilt Shop structure into a functional clinic that is still in operation today.

Rebuilding the destroyed building in Blue River came into question when it was discovered Orchid had insurance covering the contents of the building - but not the physical structure - according to former McKenzie Wellness board member Tim Laue.

Churn, or the overturn in personnel, has also caused some people to question local operations. Falvey admits churn is troubling but points out it has increasingly become a much larger problem nationally. Some studies, he says, predict as much as 75% of the U.S. healthcare workforce is going to leave the profession in the foreseeable future.

By comparison, 10 employees have left the Oakridge clinic staff over the last 2 years, compared to 7 in Estacada. For the McKenzie Clinic, those numbers added up to 5.

"It's a tough job," Falvey says. "Part of what we want to share is that there is a terrible load for rural health clinics and several have shut down."

"Another way we try to support our team is in workload. Other clinics see 20 to 25 patients a day. Our clinics see 10 to 12. We believe that means better patient care and a better work environment."

Besides challenges and churn the word controversy has worked its way into the local health care conversations. Falvey said he would rather "focus on how we're moving forward and stay out of the negative connotations in the community. Yes, we've made mistakes in the last couple of years and we've dealt with turnover. But there's nothing we've done that has strayed from our mission."

The issue of insurance coverage was one point that he did want to clarify. Falvey said Orchid was not aware, until after the fire, that the lease agreement with McKenzie Valley Wellness said they were responsible for covering the building.

"That was missed by a few people, including our insurance review team. So when it burned down and we found out we were responsible it was kind of a scary moment," he says.

Since then, Falvey said a review of the email exchange Orchid had with their insurance carrier shows they had asked: "if the contract was read accurately and it was not up to us."

The amount of the insurance settlement has fallen far short of the $1.8 million the replacement structure could cost. "We want to go back with McKenzie Valley Wellness and collect as much as we can to pay for the rebuild," Falvey said. 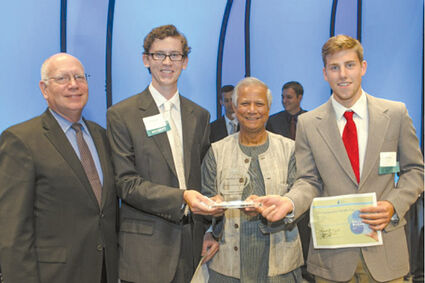 Orchid was conceptualized and founded by Oliver Alexander (left) and Orion Falvey, who participated in the Oregon Social Business Challenge in the fall of 2013. After taking second place in the state and meeting Nobel Laureate Muhammad Yunus, Oliver and Orion continued to research and develop Orchid into what it is today.

Looking ahead he says the future looks bright. "Right now our team is working well together and we can become an even better cooperator with the community. We don't want to be just a health care clinic. There are a lot of opportunities to share our values and share our mission," Falvey believes.