Draw the line against deer 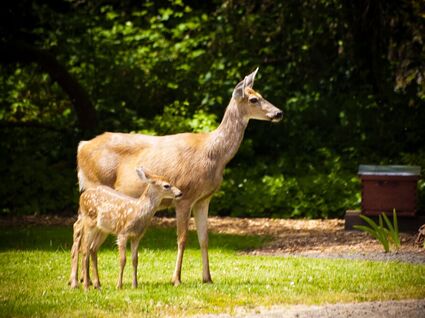 A garden is like a box of bonbons to deer, and homeowners fill it with the candy they love most.

"Deer are looking for the highest quality food and our yards often offer the best smorgasbord," said Dana Sanchez, a wildlife specialist for Oregon State University Extension Service. "When taking loving care of our plants – watering well and fertilizing – we're producing a really superior plant compared to what's in the natural environment. They are more tender and have more nutrition and water content."

In the wild, deer and native plants evolved together, so plants developed defenses like waxy leaves or prickles that make them more adapted to surviving grazing. Even when they do get nibbled, natives are more likely to survive than the succulent plants in our gardens.

"We're often selecting plants from other parts of the world that didn't get to learn through evolution about the herbivores in our ecosystem," Sanchez said. "They're 'naïve.' Even roses that have prickles don't have them around the beautiful blossoms, which the deer just snap off. They easily take what they want."

Choosing native plants – or other plants less attractive to their palate – helps deter deer. Get ideas from an Extension publication on deer-resistant plants. The list was developed for central Oregon but the plants can be grown in other parts of the state as well. Check the hardiness zones to be sure they'll grow in your area or check with your local master gardeners, who will also be able to steer you to plants that gardeners in your location have found successful.

Deer explore our yards for more than just plants. They're delighted with supplemental food provided deliberately by humans who believe they're being kind; a practice Sanchez strongly discourages. Feeding deer gives them more motivation to wander into suburban, sometimes even urban, yards.

The feeling of safety, once they arrive, makes them want to stay. The large carnivores that prey on them aren't around and humans aren't hunting them. Deer even become desensitized to dogs unless there's a close confrontation, which usually ends poorly for the dog, Sanchez said.

"Places, where humans live, are a great place for deer to hang out, which makes it difficult to keep them away," she added.

But it's an effort important to make. As more deer congregate, there's potential for parasites and disease to spread among themselves and possibly to humans. For instance, in some Midwest and East Coast states deer carrying the ticks that pass on Lyme disease pose a significant health issue. Plus, the large carnivores they're trying to escape may follow them into neighborhoods, setting up a dangerous situation.

"We don't want large plant eaters or the meat eaters that prey on them hanging around," Sanchez said. "Keeping wildlife in the wild is best for humans and the animals."

But thwarting the high-jumping animals takes quite an effort. Eventually, many homeowners plagued by deer resort to fences, whether an enclosure around a prized rosebush or an 8- to 10-foot barrier around the entire yard. However, deer fencing, made of a robust mesh material, is an expensive initial investment. Another option is a single strand of electrical wire extending from a regular fence.

Some people use motion-controlled scarecrow sprinklers, which blast water when activated.

"That's more of a shock-and-awe deterrent," Sanchez said. "It protects a limited area, though. Deer are notorious for figuring out the spray pattern and getting around it. They're helpful for a corner of the yard or a bed up against the house."

Deer repellents can be effective but need to be applied frequently during rainy periods or when plants have been watered with an overhead sprinkler. Even summer sunshine or extreme heat can degrade the products. It's also a good idea to vary the types of repellents you use because deer become sensitized to the same one used repeatedly. And remember, don't spray them on anything you might eat: The odor and taste are just as unpleasant for us as it is for the deer.

No matter what you do, don't be surprised if you discover munched plants in the garden.

"Deer are determined and persistent when it comes to filling their tummies," Sanchez said.