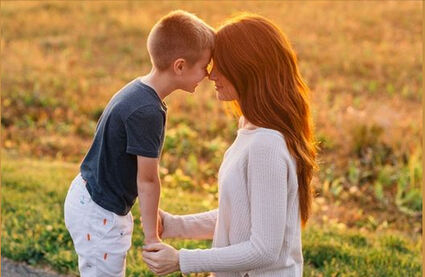 My husband and I recently divorced. We have three beautiful children, the oldest 11. When I decided it was time for me to move on, I packed my bags and was ready to leave, when to my horror, my eldest decided to stay with his father.

His father is a man who was never there, never changed diapers, and never took them to school, practice, appointments, or parties. He was the invisible father. The only good thing he did for us provided financially.

I am so angry at my son that I don't want to communicate with him anymore. I feel betrayed. I provided everything but the money, and this is the payback I get. I actually allowed him to stay because I knew it wouldn't last. For my husband to do some parental work was not within the realm of possibility. Or so I thought.

I love my son and don't want to lose him, but I can't stand to hear about his life without me. I know my behavior is wrong, but it is simply too painful to face up to my son picking my ex over me.

Kirstin, lawyers say you should never ask a witness a question if you don't already know the answer. Otherwise, you are apt to get surprised.

You weren't being magnanimous by giving your son a choice. It made you look good. You wanted to show your husband the children preferred you. The best rule to follow is never to make an offer you don't mean, and never bluff. Being caught bluffing puts you in the weakest position in any relationship.

The only person to kick is yourself because if you kick your son, you will be kicking him right out of your life.

Don't be too hard on yourself, either. An 11-year-old boy looks to his dad, not his mother, to show him how to make his way in the world as a man. Your son is focused on this man as his father, not on his failings as your husband.

I dated my boyfriend for nine years, and we broke up a year ago. We have very little contact, which has been for the best. Contact brings up too many memories.

Things are going great compared to the way they were when we first broke up. As expected, then I was sad and depressed. Anyway, I decided to go back to college and I'm getting good grades. My life is back on track, and I'm not bitter and angry like I was.

There is a male friend I would consider dating in the future. The problem is I still care about my ex. No, I'm not in love with him and don't want to get back together. I know things are over. Is it normal to still care for someone you spent all those years with?

I asked a friend what she thought, and she said, "Feelings don't just end." To give you a little more insight into the relationship, I am now 26, and we dated since high school.

Penny, you were with your boyfriend for more than a third of your life. Why wouldn't that hold some kind of power over you?

Having a way to look at him will give you a way to move on. As long as you don't cling to an idealized memory of him, the right one can replace him in your life.