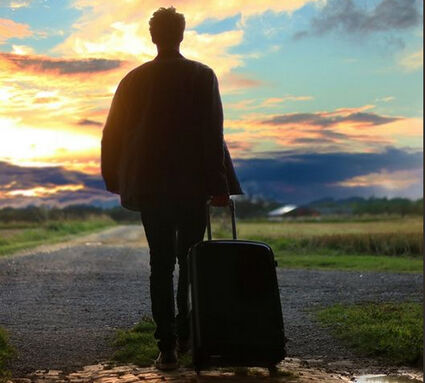 My wife and I are newlyweds, and we have had our first fight. We were out of town on vacation. To make a long story short, we got on each other's nerves due to the flight delays.

After a huge argument, we came home separately. She wants a divorce after only three months of marriage. She is a dominant person, a spoiled brat, a daddy's girl, and a Leo by zodiac.

By nature, I am an impatient person and a Taurus. I am not now in our home and desperately want to reconcile. I suggested counseling, but does that really help? She is stubborn, difficult to talk to, and easily annoyed. For the last week, all I have been doing is annoying her.

I decided to give her some time alone. Am I doing the right thing? She has these inner demons when she gets angry, and I don't know how to approach her.

Reuben, years ago Wayne had a landlady named Margaret Richter. Margaret was a spry 90 when he first knew her. One day she looked Wayne square in the eye and said, "I don't believe in divorce. I believe in a fight to the finish!"

It looks like your bride kayoed you in the first round. Don't look to the stars for a solution. The reasons for your problems are earth-bound. This separation allows her to resume being a spoiled girl, not a woman interested in going 15 rounds with you.

The party is over. She wasn't looking for marriage. She wanted the excitement of the proposal, engagement, wedding, honeymoon, and vacation. Three months later, with little provocation, she wants a divorce. Has she already calculated it's been long enough to keep the wedding gifts?

An honest confrontation is the only thing likely to lead to an honest conclusion. My guess is she would rather be Daddy's little girl than your wife.

For three years, I have worked with a woman, and we have been great friends. There were more feelings discussed earlier, but she was betrothed to another and followed through on that commitment.

Since then, she says, although there are fleeting moments of happiness, her overall marriage is not happy. She does not get the treatment any woman deserves from a husband, though I admit my viewpoint is biased.

Since she married, I have pursued other relationships. All ended in disaster. Each time I fall back on the feelings I have for her, and even now, she admits she has feelings for me.

It appears she is afraid to leave her husband and is waiting for yet another hurtful thing from him before making any move. I don't want to take on the appearance of a marriage breaker, but this man is certainly not her other half.

She knows how deep my feelings run, and that I'd wait for her if I knew she would be there in the end. I'm not sure what her intentions are. Will she get fed up and leave him? What do I do, be the passive friend or aggressive pursuer?

Edward, the comedienne Carol Burnett once played a woman waiting for her married lover to divorce his wife. After each rendezvous, Burnett grows older. Finally, the man divorces his wife and rushes to her apartment.

As usual, she is waiting by the door for him. He thrusts the door open, knocking her through an open window. When he looks around, he doesn't see her, so he rushes out and marries another woman. In the last scene, the man returns to Burnett, his old lover, expecting to cheat on his new wife with her.

This woman at work enjoys your interest, pursuit, and shared confidence. She enjoys receiving foreplay from you, but she is married to another. You are allowing your life to be held hostage by another man's wife.