"Kayaktivists" took to the Lake LEABURG: U.S. Forest Service policies that support logging old-growth trees drew over 100 protesters to Leaburg Lake last weekend. While calling for the cancellation of the Flat Country Timber Sale near McKenzie Bridge, organizers of the event urged the crowd to go further.

“This river is now known as the McKenzie but who was McKenzie?” asked Madeline Cowen of Cascadia Wildlands. “He was a European colonizer who forcibly removed the original residents from this land,” she added.

Cowen went on to say the “ongoing colonization of Oregon is absolutely brutal and complex.” She didn’t leave out the forest conservation movement, which she also noted: “has a history of arrogance and a sometimes exploitative relationship when it comes to its relationship with the indigenous community.”

Oregon Wild organizer Victoria Wingell criticized the Flat Country sale for aiming “to cut down some of Oregon’s last remaining, biggest and oldest trees— precisely the ones we need to keep growing and storing carbon.” She said “forests like these are already the best wildlife habitat, the best climate mitigation, and the most resilient against wildfire. We need to act now before we lose them for a lifetime.”

In a prior statement Tammy Terrell Robinson, Public Affairs Officer for the Willamette National Forest noted that an internal regional review of the Flat Country project file was underway. “We will use the review to ensure that our proposed actions are in alignment with the most salient science and shifts in environmental conditions.,” Robinson noted. She added that “no project implementation will occur until the review is completed and findings are communicated with Forest Service and Dept. of Agriculture leadership.”

Although no date has been announced for when the harvesting contract would be offered to bidders, protestors called on the Willamette National Forest and the Biden administration to drop the Flat Country sale “in light of the significant impacts it would have on climate, wildlife habitat, and community safety.”

Eric Schiff, a local resident, said “in 2020, we lost our home to the Holiday Farm wildfire. Now just a few years later with the Flat Country timber sale, it is unfathomable that the Forest Service is still proposing old-growth clearcut logging in the McKenzie River watershed.” 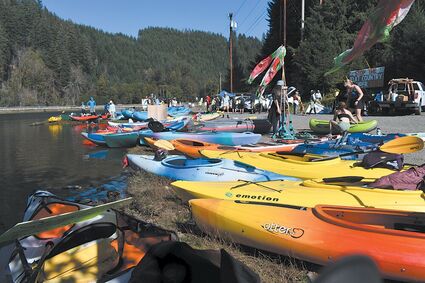 The organizers say the Flat Country logging sale has been identified by the national Climate Forests Campaign as “one of the most egregious examples of mature and old-growth federal logging projects set to take place despite President Biden’s Earth Day executive order to protect them.”

A press release from organizers said The McKenzie River Flotilla was the first in a series of rallies organized by the Climate Forests Campaign to take place across the country in the lead-up to COP 27 (the UN Climate Change Conference). Over 100 groups including Sierra Club, Natural Resources Defense Council, EarthJustice, and Center for Biological Diversity, are calling on the Biden administration to establish a rule that protects mature and old-growth forests on federal lands from logging as part of the United States' international commitments to address impacts of climate change.