Time to watch for wildlife

Change of seasons have deer & elk on the move 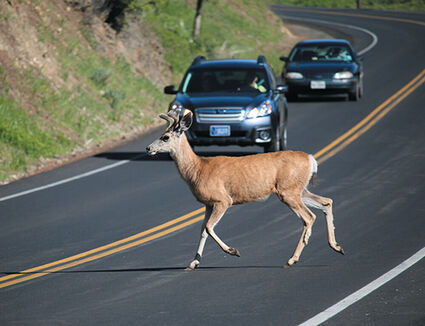 Caution is urged while wildlife are increasingly on the move around Oregon's highways.

Vehicle collisions with deer and elk tend to peak in October and November, when migration and breeding (the "rut") puts them on the move, making them more likely to cross roads. Fewer daylight hours and rainy weather also reduce drivers' visibility.

On average, the Oregon Dept. of Transportation (ODOT) documents more than 6,000 vehicle collisions with deer and elk each year. The actual number of collisions is likely higher, as many are not reported if there is minimal damage or no human injuries.

The Oregon Dept. of Fish & Wildlife (ODFW) and ODOT are asking Oregonians to Watch out for Wildlife this time of year and follow these tips:

* Be careful when driving in areas that have special signs indicating the possible presence of wildlife. These signs are posted for a reason.

* Be alert in areas with dense vegetation along the road or while going around curves. Wildlife near the road may not be visible.

If you see one animal, stay alert. There may be others nearby.

If people see wildlife on or near the road, they should slow down and stay in their lane. Many serious crashes are the result of drivers losing control as they swerve to avoid wildlife.

The same advice applies to smaller creatures like raccoons; try to stay in one lane and don't swerve. They are less dangerous to vehicles than big game animals and maintaining control of a vehicle is important.

The bipartisan infrastructure bill passed by Congress in 2021 is providing $350 million in competitive grants to the states for wildlife crossings and other mitigation. ODFW, ODOT, and other partners will be working to secure grants for projects.

Oregon drivers can also show their support by purchasing a Watch for Wildlife license plate. The revenue generated from license plate sales will benefit projects that help wildlife move within their range and between habitat patches. Originally developed by the Oregon Wildlife Foundation, the license plate is now available at the DMV.

As wildlife-vehicle collisions peak, so does participation in ODFW's roadkill salvage program. Since 2019, salvaging deer or elk struck by a vehicle has been legal in Oregon. Salvagers are required to fill out a free online permit available at https://myodfw.com/articles/roadkill-salvage-permits

Since the program kicked off in January 2019, 5,027 permits have been issued, with most for black-tailed deer in Western Oregon, where there are more drivers.

Salvagers are also required to bring the head and antlers of all salvaged deer and elk to an ODFW office for testing within five days. This is so ODFW can test the animal for Chronic Wasting Disease (CWD), a fatal neurological disease that ODFW has been on the lookout for since it first appeared in the late 1960s in Colorado.

The disease has never been detected in Oregon's wildlife. But CWD testing regulations have taken on new urgency after it was detected in several wild deer and elk in northwest Idaho, about 30 miles from Oregon's border, late last year.

"With the disease now much closer to the state's borders, we just want to remind roadkill salvagers about the mandatory testing requirements," explained ODFW Wildlife Veterinarian Dr. Colin Gillin. "The more animals the state tests, the more certain ODFW can be that the disease is not in the state. If it is detected, ODFW can implement its response plan to contain the spread of the disease.

Test results are expected to take up to a month. If an animal ever tests positive for CWD, a biologist or veterinarian will phone the person who salvaged that animal directly.