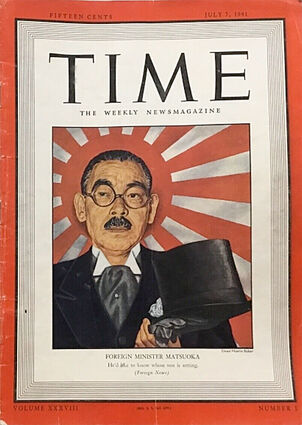 Yosuke Matsuoka was on the cover of Time Magazine for the July 7, 1941, issue.

It may be true that the movement of a butterfly's wings on one side of the world can seed a tornado on the other.

But whether that's literally true or not, it certainly is figuratively true, and nowhere is it better demonstrated than in the case of 1890s businessman and opium smuggler William Dunbar of Portland, Oregon.

If we could take Dunbar out of the stream of history before about 1890, we would derail events that led directly to Imperial Japan's alliance with Nazi Germany in 1940; to Japan's attack on Pearl Harbor the following year; to the nuclear bombings of Hiroshima and Nagasaki in 1945; and (maybe) to the fact that the world did not end in a multi-gigaton thermonuclear fireball in late October of 1962.

All this because, decades earlier, an incompetent but politically well-connected drug smuggler in tiny, faraway Portland had taken a young Japanese boy into his household as a companion for his 14-year-old son.

That little boy's name was Yosuke "Frank" Matsuoka, and he would grow up to be foreign minister of Imperial Japan and the chief architect of the Tripartite Pact with Germany and Italy.

Yosuke Matsuoka was born in 1880 in the village of Morozumi in Yamaguchi Prefecture. He was a son of a local shipping-company owner; but when he was very young, his father's business collapsed into bankruptcy after one of his ships sank, and his father died within a few years, a broken man. Matsuoka spent most of his pre-teen years with his widowed mother in proud poverty.

In 1891, Matsuoka's mother reluctantly agreed to let him venture overseas to do what he could to restore the family's fortunes. So on Feb. 23, 1893, following some crash-course English instruction, Matsuoka boarded the steamship Tacoma in Kobe, bound for Victoria, British Columbia.

And about a month after he arrived, Matsuoka joined the Dunbar household.

William Dunbar was a wealthy widower, owner of Dunbar Produce and Grocery and Turner Flouring Mills, and co-owner of the Merchants Steamship Company. He had, by the way, been the first wheat merchant to open the trade in Oregon-grown soft white winter wheat with noodle manufacturers in China.

He was also, as we've noted, a drug smuggler. Under the cover of his political connections with the Port of Portland's chief customs inspector, James Lotan, he ran an industrial-scale operation smuggling opium and illegal immigrants (mostly Chinese laborers) into British Columbia and thence into Portland. He owned two full-size steamships, the Wilmington and the Haytian Republic, operating out of the Dunbar Produce and Grocery wharf just north of the Burnside Bridge in Portland's old North End.

The steamships brought in groceries and produce from Vancouver for sale through Dunbar's wholesale grocery business, of course, and they also carried shipments of Turner Mills wheat to customers in China. But after those ships had unloaded their cargo in Shanghai or Hong Kong, it must have seemed a real shame to just have them steam on back home empty. So on the return trips, Dunbar's steamers took on passengers. Lots of passengers, most of them Chinese workers who each paid $125 to be smuggled into the U.S.

And, of course, the ships also brought back opium - opium by the ton. At one point they were supplying the entire West Coast with the stuff.

The Wilmington and the Haytian Republic kept this trade up for several years, starting in 1890 or so. By 1893, when Matsuoka came on the scene, their operations were like an open secret on the waterfront; everyone pretty much knew what they were doing. They had started unloading the passengers at sea onto small boats, and rolling the barrels full of opium overboard in a secluded stretch of the river before coming into port, to avoid being caught by the immigration and customs inspectors who were always among their first visitors when they arrived.

This may actually be how Matsuoka got to Portland; although later in life he was always happy to talk about his voyage across from Kobe on the Tacoma (which was stormy and miserable), he never spoke much about the journey from British Columbia to Portland. Most biographers have tended to assume it was a simple, uneventful railroad journey, and so it may have been; but if he actually was smuggled illegally into the country by Dunbar's crew, he certainly wouldn't have wanted to talk about that in later years after he'd grown up and become a diplomat.

This, then, was the "family business" that Matsuoka joined as a 12-year-old boy. A gregarious and outgoing lad with a rapidly increasing fluency in English, he must have gotten to know many of Old Man Dunbar's sketchy business associates, including notorious shanghaier Joseph "Bunco" Kelley and flamboyant Merchants Steamship co-owner Nat Blum. He also probably learned a great deal about the opium trade. (Opium, at the time, was legal, but taxed very heavily.)

The household consisted of Dunbar, his 13-year-old son Lambert, and his widowed sister, Isabelle Beveridge. Matsuoka joined the family in a similar role as that of Hadji in the old Jonny Quest cartoons - as a sort of foster brother and companion for Lambert. Mrs. Beveridge took a particular interest in the young Japanese boy, and spent countless hours with him working on his English pronunciation and helping him and Lambert with their schoolwork.

It was an idyllic life for Matsuoka, but it couldn't last. Dunbar's smuggling operations were too flagrant, and the underworld characters he had working for him were too unreliable. In December of 1893, the boom came down. Fifteen people were arrested on smuggling and human-trafficking charges, including Dunbar and chief Port of Portland customs inspector James Lotan. Lotan, in addition to being customs inspector, was a very prominent member of Portland's business elite and was the president of the Oregon Republican Party; so his presence in the trial guaranteed a lot of media coverage.

It ended with a hung jury, and the process of getting a trial rescheduled dragged out well into 1894. Dunbar's business partner, Nat Blum, turned state's evidence and testified against him, but did it so "creatively" that by the end of the second trial attempt no one believed a word he said any more. At that point, Dunbar left on a "business trip" to Hong Kong, and stayed there in exile, leaving young Lambert and Matsuoka behind with Mrs. Beveridge.

In 1898, Matsuoka enrolled in the University of Oregon, pursuing an undergraduate degree in law. After graduation, he spent some time trying to get admitted to an Ivy League graduate law school back east; and if he'd been left to his own devices, he probably would have succeeded. But back in Japan his mother's health was declining fast. So in 1902, he decided it was time to return to his native land.