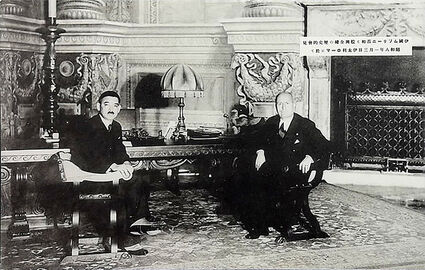 A postcard from Imperial Japan showing Yosuke Matsuoka meeting with Benito Mussolini in Rome in January 1933.

Yosuke Matsuoka left his Oregon home for the last time in 1902 when he was 22 years old; he'd lived in Oregon and, briefly, California, since age 13. His Oregon years had been happy ones, and he would remember them fondly for the rest of his life.

Oregon would remember him fondly, too (until Pearl Harbor Day, of course). Within 25 years of his graduation, he would be probably the most famous University of Oregon alumnus in the world; within 50, it's most notorious.

That, of course, was all far in the future. Just now, back in Japan, Matsuoka was not finding his hard-earned U of O degree very useful; no Japanese universities would recognize it. That effectively foreclosed future studies at Tokyo Imperial University. As the son of a merchant, he lacked any of the family connections that might be parlayed into a civil service career; nor did he have any law-school connections that could help him in Japan.

So he took the Foreign Service exam instead and launched a career as a diplomat.

As a diplomat, Matsuoka was excellent. His natural "gift of gab" had been nurtured and shaped in the boisterous, outgoing style of frontier Oregon. He'd worked in a newspaper office in Oakland, Calif., for long enough to know how to get along well with reporters. He could be garrulous and gaffe-prone, but he was generous with his time, was obviously brilliant, and was very good at the political games that always come along with diplomacy. He quickly rose through the ranks. After the First World War, he was in the Japanese delegation to the Versailles Peace Conference.

For many years after that Matsuoka served as an executive in the South Manchurian Railway Company, a Japanese-owned railroad cutting through Chinese territory which Japan had seized from Tsarist Russia in the Russo-Japanese War.

Then in 1931 came the "Manchuria Incident." A cabal of Japanese army officers blew up some dynamite near a South Manchurian Railway Company line, blamed the Chinese for it, and used it as a pretext to invade and occupy Manchuria and set up the puppet state of Manchuko there. Faced with this fait accompli, and wanting of course to keep the conquered territory, the Japanese government backed the officers up. The League of Nations strongly objected, and Matsuoka, by now a widely internationally known diplomat, was assigned to the League to handle the fallout.

Matsuoka was bitterly opposed to the idea of Japan withdrawing from the League of Nations and tried very hard to prevent it. But, ironically enough, it was he that had to lead the Japanese delegation in their dramatic walkout on Feb. 24, 1933.

On the way back to Japan, Matsuoka worried about what his reception might be. After all, his diplomacy had failed - Japan had withdrawn from the League of Nations. As a businessman, he knew what that meant. Internationally, it was a bad look; it made Japan look like a rogue state and an unreliable foreign-investment partner.

But when he arrived back home, he was welcomed as a hero. The pageantry of the Japanese delegation's dramatic exit, heads held high in solemn dignity, had appealed to the populace. Matsuoka was, at that moment, the most popular man in Japan other than the actual Emperor.

But all was not as peachy as it might have looked. With no personal family networks to support him, he had to seek support where he could find it; and the business elites that would ordinarily be with him were furious about Japan's withdrawal from the League. It may have been an important point of national honor, but it was going to cost them a lot of money; Japan was now almost an international pariah.

And yet the population of laborers and farm workers loved him.

So Matsuoka took the path of William Jennings Bryan, whom he had once met in California, and stepped into the role of a populist politician. His idea was to build a fascist-style grassroots organization similar to the one Mussolini had developed in Italy.

After two years of barnstorming around the country giving populist speeches, though, he knew he was not going to be able to get enough traction to build the mass support he'd need to overcome the challenges of being a political outsider; so in 1935, when offered the presidency of the South Manchuria Railroad, he accepted and went back to Manchuria.

Then in 1940, Matsuoka's old acquaintance Fumimaro Konoe took over as prime minister. Seeking a foreign minister who knew diplomacy and would get along well with the army and navy ministers, Konoe tapped Matsuoka for the job.

Matsuoka was only foreign minister for a year. But, it was an extraordinarily action-packed year. From the start, his goal was to forge an official alliance with Nazi Germany. He was convinced that only as a partner with Germany could Japan negotiate on an equal footing with its greatest Pacific rival, the United States. And he hoped that the treaty could be spun as a failure for the Roosevelt administration, causing Roosevelt to lose the 1940 election. Matsuoka had given up on ever being able to do business with Roosevelt's people - they were too intransigently opposed to Japan's occupation of Manchuria, which he considered an indispensable "lifeline" of raw materials for the island empire. A new administration under Wendell Wilkie would be eager to break from the old regime, and perhaps with the right kind of diplomacy, it could be brought around to Japan's way of thinking. Then the U.S. could broker a peace-with-honor deal for both China and Japan - both countries had been bogged down in a shooting-war stalemate in Manchuria for half a decade - and everyone could settle down again.

The problem was, Matsuoka thought he understood America, when in fact what he understood was the rough-and-tumble waterfront districts and lumber camps of 1890s Portland. He thought of Americans as a bluff, straightforward bunch who despised weakness but respected guts and strength. He also thought of them as not being too hung up on things like anti-smuggling laws. The sheer audacity of the Blum-Dunbar gang's opium operations had commanded respect in Portland. Matsuoka naturally thought Americans would respond positively to similar kinds of audacity playing out on the international stage in Manchuria. (He also seems not to have understood that the Japanese army's atrocities in Manchuria were the real problem there.)

But America in 1940 was completely unlike waterfront Portland in 1893. In fact, throughout the late '30s Oregon raconteur Stewart Holbrook made a good living pumping old retired waterfront gangsters for stories of those crazy old days and publishing them in the Morning Oregonian for modern readers to shake their heads over in amazement at how much different their world had become. Matsuoka was a living anachronist, and his confidence in his understanding of the country he spent his teenage years in was about to bite him, and his country, really hard. 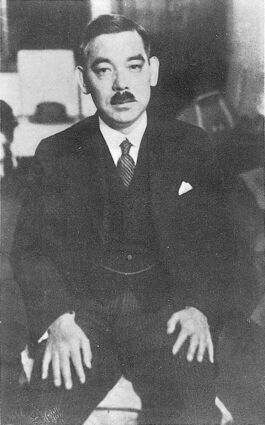 Yosuke Matsuoka in 1933, during his service as Japan's chief diplomat at the League of Nations in Geneva.