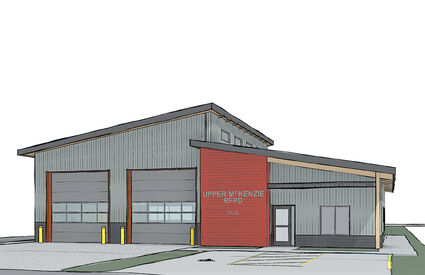 A rendering of what the UMRFPD's new Patricia "Pat" Stanley Memorial Fire Station will look like when it is rebuilt near where the Forest Glen Restaurant was located.

BLUE RIVER: If all goes well there will be a community celebration for a new Blue River fire station next year.

When recovery became the focus of the Upper McKenzie Rural Fire Protection District, it became clear the vacated alley on Echo Street where the old station stood wasn't buildable under current standards. A search began for a feasible location to replace a building that was destroyed when the Holiday Farm Fire swept through the town.

When long-time volunteers Vern and Renee Langan moved out of the area after the fire they sold their double lot parcel to the district. The site, located between Dexter and McKenzie Street, offers good emergency response access both to the town and the highway. Officials say it is also large enough for the station and parking.

Funding for the new facility includes a $2.1 million dollar state grant, received in October of 2021.

Other funds include an additional $150,000 from Lane County and an insurance reimbursement of $150,000. The funds cover replacing fire engines and a truck, equipment, and land as well as the design and $1.1 million in construction costs.

"Design began with great visions of the station we would be building in the heart of the new Blue River," according to Godfrey. "The building committee spent time visiting other small rural fire stations and formed ideas of what they wanted: three engine bays, a large training room, laundry, storage, .... 3,200 square in total. Then the reality of building costs set in. Since we applied for the State grant, building costs had increased more than 40%!"

Over last May and June, the committee worked with the architect to reduce costs. "By August, an agreement had been reached on a design that had been reduced to 2,200 square feet. It includes two engine bays, an office, a training room, a turn-out changing room, and bathrooms.

A nearly complete final design was reviewed by the team in November. Bids will be sought over the next several months using standard state procurement rules, "and we hope to hold a community celebration in our new station at the end of 2023," Godfrey said.