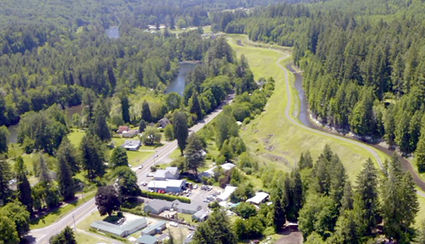 Repairs could approach the $50 million spent on relicensing

EUGENE: Internal erosion of the 5-mile long Leaburg power canal caused the Federal Energy Regulatory Commission to order its shutdown about two years ago. Now Eugene Water & Electric Board commissioners are being asked if they want to continue to operate or decommission the Leaburg hydroelectric facility, as well as its downriver counterpart in Walterville.

At last Tuesday’s board meet-ing, general manager Frank Lawson recommended that before any major decisions are made, the utility would have to first take actions that would reduce the risks of having water in the Leaburg canal.

Both projects had gone through major studies that in 2000 gained the utility a 40-year federal license to operate the plants. Together they generate about 13 megawatts, a portion of EWEB’s overall 275 MW load.

In the summer of 2018 soil movement, or piping, was discovered along the Leaburg canal. Crews have since been keeping an eye on  the problem at 15 different seepage monitoring sites.

Mike McCann, EWEB’s gen-eration manager, reported that when subsurface samples were taken from the canal bank near Cogswell Creek, “The core material was saturated soil and potentially unstable. We now know that we not only have a seepage issue but we also have an earthquake stability issue.”

McCann went on to say that “The seismic risk to EWEB is greater with the canal full of water than its current condition.”

Despite the extensive studies done during the relicensing pro-cess, those sort of issues weren’t brought up.

“I just came on the board when relicensing occurred,” noted com-missioner John Brown. “How did this get missed? Things like gates would fail in seismic events. That hasn’t changed in the last twelve years. You said it leaked since it was built. Why didn’t somebody raise a red flag and say don’t spend the $100 million bucks?”

The staff response was that awareness of seismic issues were not part of general concerns within the time frame when relicensing occurred. Nor were the potential impacts of the Cascadia Fault subduction zone generally known.

Mark Zinniker, the utility’s general engineering supervisor, said the highest risks that had been discovered were, “Seismic, specifically in the area of the Ames Reach, with its taller, steeper portions of the canal bank.”

Dangers there included cyclic softening or liquification of the levee material that could potentially lead to the loss of life during landslides that might be caused by heavy storm events.

“Even when we closed the canal headgates the canal continues to receive water from tributary streams. Another potential failure mode lurking there is in the form of debris,”  Zinniker said.  Debris is a risk, he added, because it potentially could block canal outlets - at the forebay (above the generator building), at the mid-point drainage area or at wastegates, as well as at bridges.

“Deterioration of the canal embankments continues even while out of service due to desiccation of soils and the presence of stormwater, even when not generating power,” Zinniker warned. “Improvements should begin as soon as possible, whether there’s a return to service or conversion to a stormwater conveyance.”

If the project was returned to service, costs could approach as much as relicensing did and probably couldn’t happen before 2028. The “stormwater conveyance” option, although not as expensive, would still involve a lot of repairs. The licenses for both canals will expire in 2040.

Patty Boyle, general contracts supervisor for EWEB, told the board the planning process for returning to generating power might cost in the range of $35 to $87 million. Using the canal as a water conveyance, she said, could come with a price tag in the range of $10 to $14 million.

Some issues related to using the canal as a stormwater channel have to do with how the water will be returned to the McKenzie River. In some areas, the old stream channels that existed before the canals were built are still there. However, there are other areas where homes have been constructed and a new highway bridge may be needed as well.

If the utility pursued a third option - removal of the dam and draining Leaburg Lake - Boyle said EWEB would be facing a whole different scale of costs that would be required for, “a tremendous amount of restoration work.”

Still unknown is where all the money to pay for any of the scenarios would come from. Commission Matt Barofsky said he was leaning toward a return to service. “To me at this time renewable energy is at a premium and it’s only going to get more so,” he said. Barofsky added he couldn’t see the utility walking away from the 9 to 12 MW the Leaburg and Walterville projects generate.

Although no decision was made, the staff is recommending EWEB not to reactivate the power generation operations and instead convert to using the canals to carry off storm water. “We’re probably talking five years before we’re really able to complete either a return to service or water conveyance. That lines up with the decision we’ll be making around the Bonneville contracts in 2028,” Lawson said.

The general manager said he expects EWEB will spend the next two to three years, “Making the canals safe and then we’ll start working towards whatever the next step may be. It should be clear at that point.”

Image: The “Ames Reach,” just west of Johnson Creek, has been an area of concern for the Eugene Water & Electric Board due to its steep banks and areas where seepage has been detected. An updated seismic analysis warned that portions of the canal just above Leaburg could be severely damaged or destabilized during an earthquake.