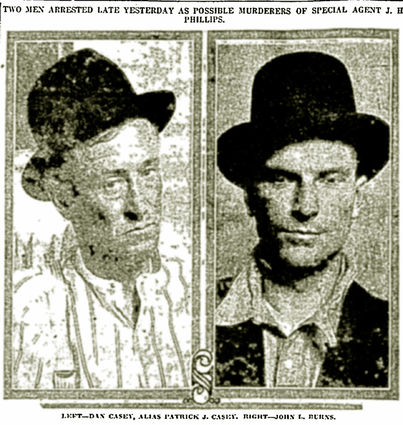 Boxcar bandit suspects Dan Casey and John Burns. Casey was hanged for murder; Burns was extradited to Ohio to serve a lengthy sentence for armed robbery.

The sun had just gone down on a warm early-summer night, and the twilight was in the final stages of fading away when Union Pacific Railroad special agents Buck Phillips and H.G. Schneider stepped into the railroad yard to make the rounds.

There had been some issues in the railyard. A gang of thieves had been systematically pillaging the railroad. Their M.O. was a simple one, and evidently pretty effective: they'd sneak aboard an outbound boxcar full of cigarettes and, while the train was en route, start chucking boxes of smokes out the door; other members of the gang would come along afterward and retrieve them. They were clearly doing this at night, because the following day railroad agents would usually find a case or two that they'd missed. And this had been going on for three months.

So Phillips and Schneider weren't just making the rounds the night of June 14, 1921. They were looking for somebody, and they had to have been a little nervous about what might happen when they found him.

The two of them walked along the train, one on each side, flashlights in hands, revolver holsters unsnapped and ready to draw.

Phillips saw a dim outline bundled up on a flatcar loaded with machinery: a man, riding the rails. Technically, this was illegal, and the two agents - "bulls" - were supposed to kick him off. But as a practical matter, Phillips and Schneider didn't much care about rail riders, as long as they weren't causing any trouble.

"Where are you going?" Phillips asked him.

"Headin' for Baker, chief," the 68-year-old bindlestiff said, adding that he was going to Eastern Oregon for the hay harvest.

Phillips nodded and moved on. This would turn out to be a mistake. If he'd paused a moment and asked another question or two, the traveler might have told him that a couple rough-looking customers had passed by him just before the two bulls arrived, moving in the same direction up the train.

The agents moved on, methodically working their way up the side of the train. A few cars later, Phillips saw what he was looking for: an open boxcar door.

In 1921, on the Union Pacific line to Troutdale, boxcars did not roll around with their doors open. They were full of freight, and they were sealed shut. If that boxcar door was open, it was because somebody had opened it.

Phillips pulled his revolver out and brought his flashlight up. "Come on out of there," he barked.

There was silence for a while. Then the inside of the boxcar lit up with four bright fiery flashes as the sound of pistol shots split the night.

Three .38-caliber bullets lanced into Phillips - one in the upper arm, one in his thigh and a third in the lower chest. He crumpled to the ground. Then two men jumped out of the boxcar and ran.

Schneider scrambled under the boxcar and, once on the other side, got up and emptied his .38 Special at the fleeing shadowy forms. Phillips managed to get three shots of his own off before losing consciousness.

He never regained it. Two hours later, in the hospital, he died.

The next morning, Portland Police Detective John Goltz was on the scene, and police and railroad agents searched the area carefully. They didn't find much - but they soon realized one of the bulls' pistol shots had hit one of the bad guys. There was a substantial blood trail leading away from the train.

Goltz's investigation led through several dead ends, but the publicity the case had generated was helping quite a bit. One key breakthrough happened when a truck driver reported that he'd been hired to move some large, mysterious boxes, fairly frequently, from the Davis Hotel, located at 123 ½ Russell Street in Albina, to a nearby grocery store. It seemed kind of weird to be moving freight through a hotel like that.

Then an anonymous tipster called and suggested Goltz might want to talk to a man named Dan Casey, who might be staying at - you guessed it - the Davis Hotel.

When police arrived at the hotel, the owner, John Burns, was friendly and helpful - and loud. "Ain't nobody here by that name," he boomed. "I haven't seen him since last Wednesday."

Then a woman walked out of one of the rooms. Goltz asked her, straight out: "Where's Casey?"

"I haven't seen Dan for a week," the woman replied loudly.

Meanwhile, Mr. Burns was slowly unlocking doors in the hallway, making sure the locks made plenty of rattling noises. "I told you Casey wasn't here," he bellowed cheerfully. "But seeing as how you are bulls, I suppose I'll have to show you around."

In the first room, the detectives found a black doctor's bag full of bandages, and in the second room, a basket full of bloody gauze. There was also a loaded .38 Special with dried blood all over it, and a box of blasting caps. The trail seemed to be hotting right up.

And yet, half an hour or so later, Goltz and his men were getting ready to leave. They hadn't found their man.

Like the cocky suspect on an old episode of Columbo, Burns now started laughing at them. "You see, copper," he jeered, "I wasn't lying to you. Casey ain't here."

Then Goltz realized there was one more room they hadn't searched - the one the woman had emerged from earlier.

The hand reaching for the gun

When they walked into it and started searching, one of the detectives gave a sudden yell.

"Look out!" he cried out. "There's somebody under that bed!"

At the same time, a long arm snaked out from under the bed and dove under the pillow, then emerged gripping a big revolver.

"Drop that gun!" shouted Goltz, getting his own out and pointing it at the figure under the bed.

It was indeed Dan Casey, and he was promptly arrested and given medical treatment for not one but two gunshot wounds - both from the same bullet, which had gone through his forearm and lodged in his chest; clearly it was one of Phillips' dying shots, fired at him as he was exiting the boxcar, since all six of Schneider's shots had been from the back.

Ballistics test done on the bloody revolver proved it had been the one used to kill Phillips, and the Baker-bound bindlestiff identified Casey out of a line-up. A jury soon made it official, and sentenced him to hang.

Two years later, at the Oregon State Penitentiary, it was done.