Oregon's first female lawyer had drama, scandal in her background 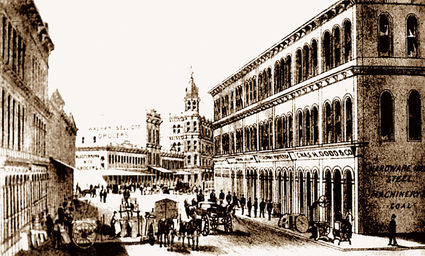 This drawing from a 1888 edition of The West Shore, a literary magazine published in Portland, shows the neighborhood in which Mary Leonard ran her boardinghouse and practiced law. This photo is along Front Street facing south from Ankeny. One of her boardinghouses was located two blocks to the left along Ash, which is the intersection shown in this image, close to the present-day location of Dan and Louis's Oyster Bar.

Most Oregon professional women can point to a truly amazing pioneer who opened her profession up to women. Physicans (physiciennes?) can look to Bethenia Owens-Adair, who, despite her now-embarrassing enthusiasm for eugenics, was a giant in her field. Journalists (journalistes?) have Abigail Scott Duniway, about whom little more needs to be said.

But attorneys? Not so much - not, that is, if you believe the conventional wisdom on the subject. Oregon's first female attorney was a bit of an embarrassment ... or was she?

The conventional wisdom on Oregon's first-ever "lady lawyer" is that she was a grasping, crazy-eyed but endearing borderline girl, grinding down all barriers through the sheer force of manic enthusiasm and pro-level nagging skills.

She'd gotten into the profession of law after acquiring her husband's large estate through the simple expedient of murdering him before their pending divorce could be finalized - so the rumor goes. Then, it adds, she moved to Portland and proceeded to make herself notorious as a last-ditch defender for the clearly guilty down-and-out in police court, as a hard-drinking and unladylike mascot of sorts at social gatherings of young male attorneys half her age, and to top it all off, as an operator of boardinghouses marketed winkingly to working prostitutes.

Ah, stereotype. So comforting, so easy to laugh off. The truth of the Mary Leonard story will probably never be fully known, but it's a sure bet that it bears only a faint resemblance, at best, to this conventional wisdom.

Mary's life was complicated and full of drama - on that, at least, everyone seems to agree. Originally from Switzerland, she came to The Dalles in 1875 to meet, and subsequently marry, a prosperous ferryman, hotelier and restaurateur named Daniel G. Leonard, when she was pushing 30 - at the time, an age at which women started worrying about spinsterhood - and he was pushing 60.

Their marriage lasted roughly two years before he sued her for divorce, claiming she was lazy and a spendthrift, had started refusing him what he referred to (perhaps tellingly) as his "marital rights," and had started sleeping regularly with a telegraph lineman who was staying in his hotel at the time.

She shot back that he had put her to work like a servant in the kitchen, worked her until her health broke and then refused to pay for necessary medical treatment, refused to give her money and treated her with physical cruelty. She denied, of course, sleeping with the lineman.

While all this was being sorted out, the judge ruled that Daniel must pay separate maintenance, since they were living apart. This he refused to do, prompting her to fire off an angry letter to him in which she implied, essentially, that she would exact a terrible revenge if he did not obey the judge, and that he should watch his back.

A few nights later, someone plugged Daniel G. Leonard in the head with a small-caliber pistol while he slept.

There was no actual evidence that Mary had done it. But everyone assumed she had. First off, Daniel was apparently not a nice man, and the popular opinion on the subject was that he'd had it coming. So when, a year or so later, she was acquitted, it wasn't so much an exoneration as a justification - not what you need if you want your neighbors to stop looking at you like you're Norman Bates. Nor did it help that her defense attorney was widely reported to have conducted a "masterful" defense - the implication being that the verdict had more to do with his skills than her lack of provable guilt.

The timing of the crime also made it look bad for her. Had Daniel been murdered a few days later after the divorce was final, she would have gotten nothing. But because he was murdered before the ruling could be made, she was his sole heir - and he was a fairly wealthy man.

Thus, regardless of means or opportunity, she had motive in spades, and that was good enough for the rumor mill. And in 1877, being known as an over-30 adulteress, murderess, and almost-divorcee - reputations didn't get much more ruined than that. Finding another husband was surely out of the question.

She may also have felt that her economic prospects in The Dalles weren't all that good. Certainly she could have continued to operate her almost-ex-husband's business, and most likely made a good living doing it. But apparently she had had enough of Wasco County.

So instead, she moved to Portland and went into business as the proprietress of a boardinghouse in the wild, seedy neighborhood known as the North End - the corner of town near the waterfront north of Stark Street, known as Old Town today. In the 1880s the North End was the most dangerous part of town, home of Portland's skid road, peopled with sailors on shore leave, thieves and ruffians, laid-off loggers, temporarily-wealthy gold miners and prostitutes of all kinds. It was to these folks that Mary now went into business renting out rooms.

Looking over Mary Leonard's life today, from the safe distance of 130 years, it looks pretty likely that her decision to do this changed her life - and Oregon history - more radically than she ever imagined it would. We'll talk about how that played out next week.

Finn J.D. John, an instructor at Oregon State University, writes about unusual and little-known aspects of Oregon history. His book about 1800s Portland, "Wicked Portland: The Wild and Lusty Underworld of a Frontier Seaport Town," will be out on June 5. To contact him or suggest a topic: [email protected], @OffbeatOregon (on Twitter), or 541-357-2222.