MCKENZIE ATHLETES BACK IN ACTION 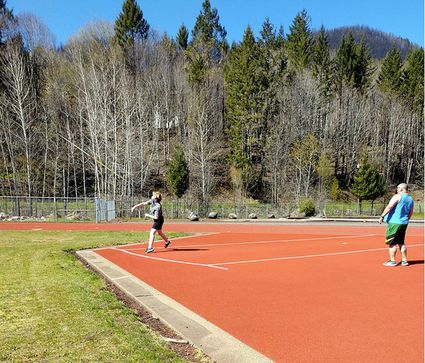 It has been far too long! The Virus and the Holiday Farm Fire 2020 coupled to box up and shelve McKenzie student/athletes and their opportunities to compete since last Spring (2020). Restrictions enacted in response to the Virus pandemic by Oregon School Activities Association (OSAA), the Oregon Department of Education (ODE) and mandated by Oregon Governor Kate Brown canceled, then reorganized high school athletics into shortened, displaced seasons this Spring.

The student/athletes of McKen-zie were forced to endure an added layer of restriction due to the devastating Holiday Farm Fire 2020 damage in the McKenzie corridor, including on campus. No Eagle athletics have transpired until now.

McKenzie Head Track and Field Coach Jack Devereaux welcomed six Eagles out for track and he is excited and proud to be working with them. According to Coach Devereaux, "the kids are super happy."

Eagle junior Hannah Prater and sophomore sister Hailey Prater, sophomores Trent Peek and Cody Moralas, and freshmen Thomas Hayes and Levi Lockhart are the first to represent McKenzie in nearly a year absence and notably, Hannah earned the distinction of the first Eagle to nail down a legal mark in an event, the discus.

"These kids are pioneers and I am extremely proud of them," Coach Devereaux exclaimed. "I feel they (athletes) now understand, due to the Co-Vid and the Fire, that competing is not a right but a privilege. Coaching them has been therapeutic for me."

McKenzie did not field a complete Girls team and did not figure in the team scores. Bonanza won the Boys Track Meet with a total of 102 points on the afternoon and Crane finished a ways back in second, scoring 76 pts. McKenzie Boys finished 8th in the team competition with 11 pts. earned.

"I am very happy with how they competed and how things are going," Coach Devereaux shared. "I told them to go out and have fun and they did. North Lake put on a heck of a track meet. Our kids got to see some State Champ throwers in action."

Indeed the Coach should be proud as the Eagles competed on just their 5th day in action, while the other Central Oregon schools had all practiced much longer and seen action in other meets already.

Next on the agenda, including a few more practices, is a trip to Sisters High School on Friday, April 30. Teams currently scheduled to compete in that meet are Culver, Gilchrist, North Lake, Sisters, Cascades Academy of Central Oregon, and McKenzie.