The mysterious destruction of the S.S. South Coast 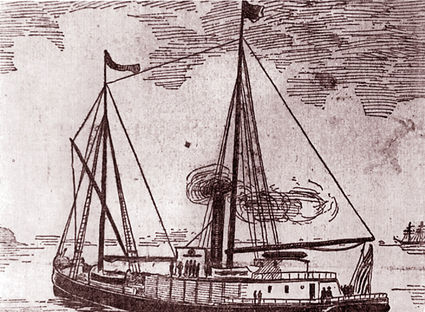 An old line-drawing of the steam schooner South Coast, most likely from the 1890s. In this illustration, you can see both masts are rigged to carry sails; the ship was initially designed as a sailing vessel. Later, the aft mast was removed entirely, and the forward mast was used as a loading boom.

On a calm day in mid-September of 1930, a small steam schooner put out of Crescent City, Calif., bound for Coos Bay with a crew of 18 men and a 250-ton load of logs. It was never seen again.

The ship was the S.S. South Coast. On that day, three decades into the 20th century, she was already a historic vessel. In a sense, she actually predated the steam schooner era - in 1887, when her keel was laid, all steam schooners were actually sailing ships retrofitted with steam engines. The South Coast was one of these. The fact that she was still working 33 years later, near the end of the steam-schooner era, was unusual.

But however great that might have been for a historian, for a sailor working on that ship, it was bad. Wooden steam schooners, after a couple dozen years in the water, usually became waterlogged, as the seawater percolated into their hulls. When that happened, they lost a lot of both flotation and strength. By all accounts, the South Coast was plenty waterlogged by 1930; in fact, the word in the Coos Bay area was that she was barely seaworthy.

That should not have mattered. It was early autumn and the weather was mild and calm.

The first sign of trouble came on Sept. 17, when the freighter Lake Benbow reported by wireless that it had spotted an empty lifeboat floating on the sea, with the South Coast's name stenciled on it.

Now, a lifeboat floating in the ocean is a very bad sign. Lifeboats are secured to ships very carefully so that high winds and boarding seas can't easily carry them away. If a lifeboat is in the water, there are only two possibilities: Either somebody launched it, or tremendous force was applied to the ship it was attached to.

Everyone hoped for the best, but all hopes for a harmless explanation for this find were dashed by the next report, which came in soon afterward from the oil tanker Tejon:

An intensive search for survivors ensued, spearheaded by a Coast Guard seagoing tug, the Cahokia, as well as a number of aircraft. They soon found the debris field, and two of the ship's lifeboats were adrift in it - completely empty: no people, no food or water supplies, no oars.

After checking them out, the Cahokia sank the two lifeboats with its deck gun (a standard practice, as they were considered to be hazards to navigation), along with the deck house.

No further clues were found, and no bodies were ever recovered.

Theories started flying around almost immediately. Perhaps, some suggested, there had been an at-sea collision. But no other ships had reported such an incident, and no other ships were missing.

Perhaps the ship hit an uncharted rock, others posited. But the debris field was found so far off shore as to make this very unlikely.

There are also what author Grover refers to as the "the X-theories" - the highly unlikely ones. One such theory might be a sudden, very small, very intense storm of a type similar to the famous Columbus Day Storm that pounded the Willamette Valley under clear blue skies in 1962, or the one that sank the entire Columbia River fishing fleet in a one-hour burst of mayhem in 1880.

Another possible-but-unlikely theory was a sudden burst of seismic activity on the seabed under the ship, of the sort witnessed by two schooners off the coast of California in 1895, which caused a violent explosion of water above it. Depending on the depth of the water, it's possible that such a "seaquake" could have delivered shock waves powerful enough to break the old, tender ship apart.

But none of these explanations account for the fact that no bodies were ever recovered - nor for the fact that at least two of the ship's complement of three lifeboats were somehow launched, but stripped of their oars and provisions.

There is one possibility that makes sense, and there's actually some evidence to support it - scant evidence, but evidence nonetheless. It's a boiler explosion.

Boiler explosions, in 1930, were about as common as chicken lips. During the pre-Civil-War heyday of river steamboats and railroad locomotives, back when these powerful and dangerous appliances were assembled and operated in ways that substituted competitive recklessness for engineering expertise, boiler explosions were a big enough problem that the government formed the Steamboat Inspection Service in 1852. By 1887, when the South Coast was built, boilers just didn't explode any more. And the one on the South Coast had been working just fine for three decades.

But the ship was grossly underpowered - its engine put out just 190 horsepower. That's the same amount produced by the engine of a new Chevrolet Malibu, but instead of a one-and-a-half-ton automobile, it was muscling around a 301-ton freighter. This engine had been running at full throttle, day in and day out, since it was first installed in the ship. Metal fatigue is a real possibility under such conditions, and the ship was fully laden when it blew, so the power plant would have been working hard.

Furthermore, a group of Gold Beach residents reported seeing a blue flash on the horizon, followed by the sound of a distant explosion, on the night the ship vanished.

This could explain a number of things. Photos of the South Coast show two lifeboats on davit cranes atop the aft end of the deckhouse. The boiler was situated beneath the forward end. Had it exploded and taken the deckhouse off the ship, it's entirely possible that those crane arms might have been broken off, releasing the boats. The residents saw the flash at night, or at least after sundown, so most of the crew would have been inside the deckhouse at the time - sitting ducks. Many if not all of them would have been severely mangled by the blast, which means there would have been plenty of blood in the water to attract sharks - which could explain the fact that no bodies washed ashore.

Such a blast also would have removed the upper works - decks, deckload, masts, stuff that would float - from the waterlogged timbers of the hull, which would not.

Well, it's a theory. But to prove or disprove it, a person would have to look at the evidence ... and the evidence was all shelled and sunk by the Cahokia's deck gunner.