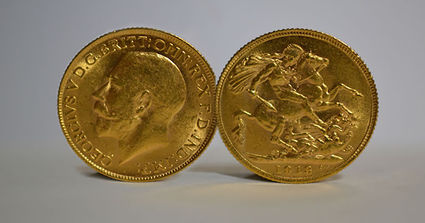 Dawn was just breaking, and Tom McAdams had just barely crawled into bed, when he got the alarm. A 50-foot sailboat was washing ashore near Waldport.

McAdams had been up all night escorting a leaking fishing boat into port after it got caught in a bad storm 20 miles offshore. Now it was the morning of Dec. 13, 1973, and it was his wife Joanne's birthday. He'd planned on snatching four or five hours of sleep and then maybe doing something with Joanne.

Instead, he was sprinting across the street to Newport's U.S. Coast Guard station, jumping a fence, and bounding into his 44-foot rescue lifeboat.

McAdams was a master chief petty officer in the U.S. Coast Guard (and still is, albeit retired; he's now in his 80s). In 1973 he was the commander of the Newport station, and was already probably the most famous enlisted man in Coast Guard history, a title he certainly holds today. By the time he retired in 1977 he had personally rescued hundreds of people, and taught hundreds of other rescuers how it was done.

On this particular morning, though, there wouldn't be much for McAdams to do. He raced out across the Yaquina Bay bar - which was rough, but it takes a lot to stop a 44 from crossing any river bar - and turned south. But by the time he'd gone a mile or so, the station radioed that the yacht had gone up on the beach, out of reach for a rescue boat. Other Coasties, rescue swimmers Greg Albrecht, Lewis Cavina and Bill Masten, were on their way down Highway 101 to the beach; saving the people on the boat would be up to them.

When the rescue swimmers arrived, they found a middle-aged couple struggling feebly in the icy surf in their life jackets, trying to swim to shore. The rescuers quickly got them out of the water and onto dry land.

The couple's names were Helen and Joe Browning. Both were in their mid-50s. They told their rescuers they'd sold their business in San Diego and bought their $150,000 sailboat - a two-masted steel-hulled motorsailer that they named, ironically enough in light of future events, the Que Sera, Sera. Then, perhaps lulled into a false sense of security by the size of their boat and the perpetually lovely weather in San Diego, they set out on what they hoped would be their new retirement dream life, first sailing around the world and then just tooling around from port to port having adventures. They would start off with a shakedown cruise to Port Orford to visit Helen's sister.

But on the way, they ran head-on into a massive storm system off Gold Beach.

Port Orford was not a good place to try to put into during a storm. So they pressed on under diesel power, hoping to make Coos Bay, as the weather steadily worsened.

Then the engine died and the steering malfunctioned, leaving the couple helpless in the storm.

By now they'd been up for 48 hours straight and were exhausted. So they threw the anchor overboard, waited for it to catch, confirmed that it was holding, and went to bed.

They were awakened by the jolt of the keel of their boat slamming into the sandy ocean bottom, just off the beach north of Waldport, and this is how they learned that the Que Sera, Sera's anchor was too small. It had slowed their shoreward drift, and kept them heading into the wind rather than rolling in the trough of the sea; but it had been dragging through the sand all night. Now they could see that they were done for. Their boat was going onto the beach; there would be nothing they could do about that. But it would be doing it in slow motion, which would make it very difficult for them to get off safely.

Because it was a sailboat, the Que Sera, Sera had a deep keel. A 50-foot motorsailer doesn't draw a lot of water compared with, say, a steam schooner; but it's seven to 10 feet - plenty enough to drown in. Especially in the outer breakers on a stormy day.

The Brownings' nine-foot dinghy had been smashed by the heavy seas. So they got out their emergency life raft and pulled the inflation cord. The raft burst into its full size, the wind grabbed it, and away it soared. McAdam's men later found it several miles away.

So Helen and Joe decided to swim for it in their life jackets. They tied themselves together and jumped in the drink.

Of course, they were likely already plenty cold when they did this; and they weren't going to get any warmer splashing around in the 48-degree water off Waldport. Nor were they able to make much headway through the double set of storm-driven breakers to the shore.

So the Brownings were whisked to the hospital, and their lives saved by the slimmest of margins. The pounding surf drove the Que Sera, Sera higher and higher on the beach until it was stuck on its side right in the midst of the inner breakers. McAdams filed his reports, congratulated his crew, and figured his work was done.

McAdams got a phone call at his home the day after the rescue. It was Joe Browning. He'd traveled to the Coast Guard station at 8 p.m., immediately after his release from the hospital, and asked to speak with McAdams. He'd been so distraught that the Coasties had called up McAdams and put Browning on the line with him.

"Could you help me?" Browning asked.

"Well, I don't want to talk over a regular phone. Could you come to the station?"

So McAdams strolled across the street to the Coast Guard station. He found Joe Browning waiting anxiously for him.

"My life savings are in that boat," he said. "I've got a bag of gold and it's hidden in the air duct vent in the main salon."

By "a bag of gold," Browning meant 18 pounds of uncirculated British gold sovereigns. At the time the hoard was worth about $60,000; at mid-2021 gold prices, that would be well over half a million.

McAdams agreed to do what he could to retrieve it for him.

Over the next few days the Coast Guard crews spent a lot of time on the beach trying to get into the boat. Another storm blew in the next day, tore off both masts, and buried most of the boat in the sand. For a couple days the Coasties visited the wreck site at each low tide; but every time they thought they might be able to get to it, a storm would kick up.

Then the phone rang in the Coast Guard station again, and it was a newspaper reporter - almost certainly from the Newport News-Guard, although McAdams doesn't specify.

"They called me up and said, 'How come your crew is down there almost every night on that boat? What's going on?' I said, 'Well, the fellow's got a restaurant in San Diego and a home there and all his papers, his insurance papers and his mortgages, are all on board the boat.'"

Those papers might have been on board the boat, or they might not, as far as McAdams knew; but he also knew that if the newspapers got wind of a giant hoard of gold buried on that boat, there would be trouble.

"I know they would have people down there with bulldozers and dynamite and everything else and shooting everybody up," McAdams said. "I didn't know how much gold was there, but he said his life savings."

Finally the weather cleared and the tide went out. With the help of the Newport Fire Department's metal cutting saw and dredging pump, they cut a hole in the salon, blasted out the sand, and managed to get in far enough to reach Browning's life savings.

McAdams took the gold back and stuck it in his safe. Then he sent a message in to his district commanders, came clean to the newspaper people about the "restaurant papers," and called Browning to come pick up his gold. "I'll be up in a few days and get it," Browning told him.

The next day, though, McAdams got a message from the State Department: "Do not give gold back until release."

McAdams figured they were checking Browning out, making sure he wasn't a bank robber on the lam. He had, after all, been preparing to leave the country with the money.

Sure enough, just after New Year's Day, the State Department notified him the gold could be returned to its owner.

"And by God the next day the owner showed up," McAdams recalled. "We went to the bank. He paid for the deposit box that we had there. We broke it out. 'Here's all your coins,' I said."

Browning gratefully collected his treasure, signed the receipt, gave McAdams $200 to treat his crew as a thank-you, and hit the road.

"The next day I got a message from the state department saying, 'My message so-and-so canceled. Do not, do not give gold back,'" McAdams said.

McAdams replied instantly that it was too late, the gold was gone; and within an hour or so of sending the message, an FBI agent called on the phone from the Bureau's Salem office.

"I'll be down in an hour," the agent said - and he was, too. He covered the 82 miles, which Google Maps estimates takes 93 minutes to travel, in just over an hour, so he must have been flying. McAdams gave him all the receipts and things, and he took them back to Salem.

That was the last McAdams ever heard about it.

So, what was the deal? Was there something sinister about the half-million-dollar bag of gold? 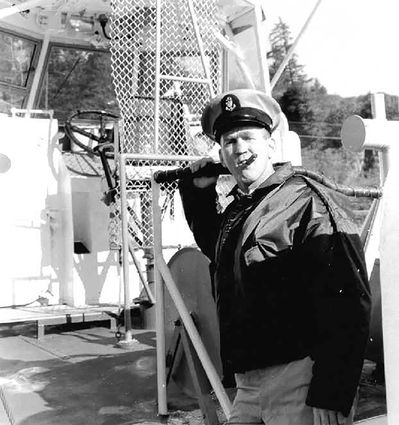 Master Chief Thomas McAdams stands near the steering station of a 44-foot motor lifeboat with his trademark cigar.

Almost certainly not. For a retired couple embarking on a sailing voyage around the world, deciding to carry all their money as hard British currency may not have been a good idea, but it was certainly an understandable one. Likely the FBI just wanted to check things out, and was late getting its request in to the state department.

But one still has to wonder....