ODFW bracing for another drought year 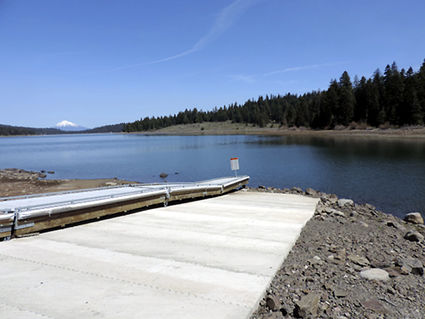 A lot of boat launches on reservoirs are likely to remain high and dry again this year.

March and April of 2021 were among the driest spring months since the 1890s. Many streams are already at 25 percent of the flow that is typical for this time of year, with flows usually seen in early summer observed in April on some southern Oregon streams

ODFW is bracing for a serious drought as summer arrives, with the entire state being impacted. Currently, 72 percent of the state is in severe or extreme drought status according to the U.S. Drought Monitor.

"Unfortunately, we are likely looking at a very tough summer and fall ahead for fish," Shaun Clements, ODFW Deputy Administrator for Inland Fisheries. "It's possible that ODFW may have to take emergency actions to protect native fish populations due to the drought."

"Please try to be flexible with your fishing plans this summer as we get through this drought," continued Clements. "Our weekly Recreation Report is the best source of information on conditions and any emergency regulation changes due to drought."

Some of the emergency actions that could occur are:

Emergency closures/regulation changes: Certain areas may be closed to angling to reduce stress on vulnerable fish populations already struggling due to drought; bag limits could be reduced or seasons shortened; "hoot owl" regulations may close fishing earlier in the day.

Fish relocation: While rare, it's possible ODFW will salvage fish and move them to a different waterbody.

On days when temperatures soar, anglers can do their part to reduce the stress fish are under:

Fish early in day when water temperatures are cooler.

Look for trout in deep, high elevation lakes or shaded streams near headwaters. These places are often cooler.

Use barbless hooks so you can release fish easily and land fish quickly. The longer the fight, the less likely the fish will survive if released.

Keep the fish in the water when you unhook it and cradle the fish upright until it revives enough to swim away.

Use your judgement. If conditions where you want to fish seems especially severe (low, hot water), consider fishing somewhere else where water conditions are better.

Due to climate change, droughts are expected to become more frequent and more severe. ODFW scientists are working to identify coldwater refuges, support flow restoration projects and improve habitat where possible to mitigate the effects of climate change on fish. For more information, see the agency's climate change policy.

"There are things we can do to help ensure our iconic species can weather these droughts," Clements said. "By protecting and restoring the most important habitats to provide cool, clean water, we give them a fighting chance."