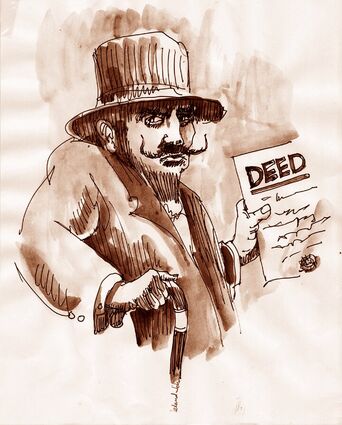 The classic Snidely Whiplash-style melodrama victim. John H. Mitchell was probably as close as Oregon has come to a real historical figure who fits this stereotype.

When you're watching a melo-drama, you know right away who the villain is. That's him over there, twirling a sinister handlebar moustache beneath a sleek silk hat and telling the pretty widow and her nine orphan children to kiss their beloved homestead goodbye.

But that's melodrama, right? And the next scene is always one in which the hero foils the villain's evil plan.

But this scene wasn't melo-drama. It was real life. The widow was Mrs. Mary Jane Balch, wife of the first man hanged in the history of the state of Oregon. The homestead included much of what's now Portland's Northwest neighborhood, some of the most valuable real estate in the state. And the villain - an attorney Mrs. Balch had hired to help her sell, who had craftily arranged the paperwork so he could gobble up nearly all the proceeds - was none other than Oregon's very own Snidely Whiplash: Future U.S. Senator John Hipple Mitchell.

As a member of the U.S. Senate, Mitchell enjoyed the official title of "The Honorable John H. Mitchell," but, well, that title didn't quite suit him. For one thing, "John Mitchell" was an alias. For another ... well, perhaps I should just tell his story.

Mitchell's real name was John M. Hipple - "Mitchell" was his middle name - and he was born in 1835 in Pennsylvania. After graduating from college, he worked as a schoolteacher there. In the mid-1850s he got one of his students, 15-year-old Sadie Hoon, into some family-style trouble, and then married her.

A few years later, the Hipples had two additional children, and John proved hardworking and ambitious. By 1857, he was a practicing attorney, and well on his way to making a nice life for himself and his little family.

And then ... he vanished. He took his youngest daughter and his mistress, "borrowed" $4,000 belonging to the law firm he was working for (which he did pay back later), and set out across the continent to start a new life in California, leaving his wife and other children behind and penniless.

This new life must not have been much of an improvement, because in 1860 he did it again, abandoning the mistress there and moving to Oregon with his daughter.

A new life, a new city, his old tricks

Portland in 1860 was about as far away from anywhere as you could get without living in a log cabin and killing stuff for dinner. As other men had before him and others would again after, he found refuge from a checkered past in this frontier city, a place to start a new life. And with a new life came a new name: John Mitchell Hipple was now calling himself John Hipple Mitchell, Attorney at Law.

It was shortly after arriving that Mitchell deftly fleeced the widow and orphans Balch. At around the same time, the still-married Lothario started romancing the daughter of a blacksmith in Oregon City; he subsequently married her without having bothered to first divorce Sadie, an oversight that would come back to haunt him later.

Mitchell was, by all accounts, as charismatic as he was rascally. He soon made the acquaintance of another newcomer to Oregon: the controversial and flashy Ben Holiday, the Gilded Age stagecoach-and-railroad magnate who rocked the Portland establishment with his energetic, take-no-prisoners approach to business, especially his Oregon & California Railroad. Mitchell became Holiday's personal attorney, which was most certainly a lucrative job, and soon he was Portland's leading railroad-and-timber lawyer.

But where Mitchell made his big money, early on, was by a deft swindle pulled in 1868, which left him and few of his friends with title to half of downtown Portland.

Before Portland was more than a clearing on the river, a woman named Elizabeth Caruthers and her son, Finice, had taken out a 640-acre homestead claim that was just south of what had grown into downtown Portland. The property, clearly in the path of progress, was already skyrocketing in value. Elizabeth Caruthers considered herself a widow - her husband had disappeared and was presumed dead - so the land claim was in her own name.

Both Carutherses subsequently died, with no known heirs and no will. Mitchell and some promoter friends saw their chance.

They went on a hunt for a man who answered to the name of Joe Thomas - the name of Elizabeth Caruthers's vanished husband - who would be willing, for a fee, to swear to be the Joe Thomas, the missing husband himself.

They found such a man in St. Louis. Although his real name turned out to be John C. Nixon, he was willing to lie about that, which was good enough to get the job done.

Nixon was brought to Portland, where he was sworn in and faithfully did his bit of perjury. Then, after receiving an $8,000 payoff for his services, he deeded the land over to Mitchell's group.

By the 1870s, Mitchell knew well how profitable it could be to mix business and politics. He'd gotten himself elected to the state senate in 1862, almost immediately upon arriving in the state.

Ten years later, he was able to clinch the prize he was really after: A seat in the U.S. Senate. At that point, though, he was nearly undone by a blast of karma. It had come to the attention of his political enemies that he'd abandoned most of his first family in Pennsylvania, was living under an assumed name, and was a bigamist.

Luckily for Mitchell if not for his adopted state, the Senate decided these things weren't deal-killers, and seated him - whereupon he embarked on a 30-year run of deviousness, influence-peddling and chicanery that would leave the state, overall, somewhat worse for wear - although he did accomplish some notable good things for the state. His efforts got the Cascade Locks funded, as well as a number of Oregon's complement of life-saving lighthouses.

However, Mitchell worked tirelessly to promote the interests of his clients in Washington, including Ben Holiday and, later, the Southern Pacific Railroad. He also never seemed to weary of trying to get the federal government to renege on treaties made with South Coast Native American tribes, whose heavily timbered lands development companies coveted.

But he's best known today for his part in one of the biggest land swindles of American history - and his role in that swindle would finally bring him down.

In the early years of the 1900s, federal public lands in Oregon were available to individual homesteaders in 160-acre chunks for a tiny fraction of their true market value - $2.50 an acre. Large timber companies like Booth-Kelley and Weyerhaeuser wanted to buy vast swaths of it, and felt they should be free to do so - but they weren't.

So they simply made arrangements with "front men," often hobos, who would file a claim on 160 acres, pay the $400 for it with company money, and sign it over to the big outfits.

In the process of making these arrangements, the companies got some help from Mitchell. And when a federal investigation by Theodore Roosevelt appointee Francis Heney started looking into the matter, it was all over for the white-bearded Grand Old Man of Oregon politics. 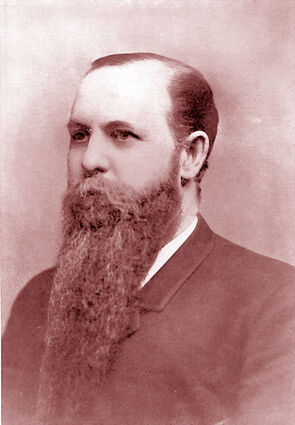 Mitchell was convicted and sentenced to serve six months in prison and pay a $1,000 fine - which sounds beefy in 1903 dollars, although the bribe he was being convicted of taking was twice that.

In any case, he died from a dental abscess while the case was on appeal, so he never actually served any prison time. To this day, he's one of only five Senate members in U.S. history who have been convicted of a crime while in office.