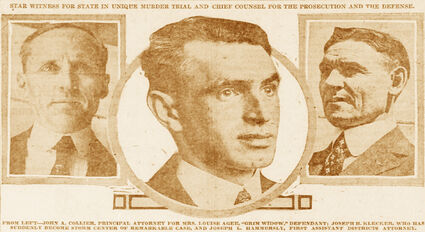 This set of mugshots ran in the Portland Morning Oregonian on July 29, 1921. From left to right, John A. Collier, attorney for Louise Agee; Joseph Klecker, the state's star witness in the case, who claimed Ms. Agee had vamped him a la "Mrs. Robinson" during trombone lessons; and Assistant District Attorney Joseph Hammersly.

The trial started on July 27 with the state presenting its evidence. It looked pretty damning, at least at first. The physician who was called to help the dying Harry Agee testified that as far as he could tell, Louise's side of the bed had not been slept in; the pillow was still fluffy.

Klecker, the music teacher, took the stand and told his stag-magazine story about Louise's unrequited passion for him. He went on to "confess" that they had been "inappropriately intimate" several times during trombone lessons. The crowd murmured disapprovingly. Louise looked through him as if he weren't there.

Then it was attorney Collier's turn for cross-examination. He immediately put Klecker on the defensive with a series of questions about the timing and relevance of the "infidelity" testimony, which culminated when he suddenly stooped and pulled a dark, blood-stained overcoat out of a traveling bag at his feet.

"Did you ever see that coat before?" he demanded.

It was a complete surprise to everyone in the courtroom: a dark overcoat corresponding to what Louise Agee had said the intruder wore, liberally stained in human blood, with a sharp (and also bloody) hunting knife in one pocket and a sheet of trombone music in the other.

As everyone subsequently learned, the coat had been found rolled up under a fern by J.D. Swing, Louise Agee's father. Swing said that after it became clear that the police had quit looking for further clues, having become convinced that they'd already solved the case and need not bother further with it, he'd spent most of his time in Portland hunting through the neighborhood looking for more evidence. He doesn't specifically say, but he probably had some idea of finding the murder weapon. Medical examiners had already testified that the wound in Harry Agee's throat was of an odd shape for a razor cut. It was deep in the middle and shallow at both ends, with impact damage on the lip of the cut as if the fixed hilt of a knife had struck the flesh as the blade sliced through. The wound could have been inflicted by a razor, probably, they said; but a short, very sharp knife was a more likely weapon.

During Swing's search for that weapon, he had come across a tightly rolled bundle under a clump of ferns. He saw it tucked in there when he parted the ferns with his walking stick; then, before touching it, he ran down the block and got a couple of passers-by to witness his find. They came and, as they watched, he unrolled the coat and found the knife and music sheet in the pockets.

Swing had then contacted attorney Collier to ask him what he should do with the find, and Collier told him to hand it over and keep his mouth shut. Then, at the exact moment in the trial when it would have the greatest psychological impact, he produced it in court with a flourish. (This is the sort of legal tactic that would never fly on "Perry Mason," but apparently in 1921 the rules of discovery were different.)

Was it real, this coat, or was it a plant? Subsequent testing gave conflicting answers. The blood on the coat and knife was human, and there was a lot of it. It was hard to imagine how the thing could be faked up; somebody would have had to "donate" several pints of blood to do so. But a late summer storm had dumped over an inch of water on Portland in the four weeks the coat had supposedly been rolled up under the fern, and the blood wasn't washed away and the sheet music wasn't water damaged. Maybe that could have happened, if it was rolled up very tightly?

Also, the presence of the trombone music seemed suspiciously on-the-nose. It wasn't the kind of thing a burglar would take from the house, and if Klecker was the killer, why would he pack sheet music around in his overcoat pocket? It only really made sense as planted evidence.

In any case, there was enough ambiguity that the state's case probably could have survived this blow, if not for several other things that the court learned about Klecker: First, that he hadn't had a steady job for more than a few months at a time since the First World War ended; at the time of the murder his day-job was as a janitor. (Teaching trombone lessons and playing in various brass bands was a side hustle for Klecker.) This, of course, gave everyone the strong impression that he was very flaky; and it has to have crossed the jury's minds that no woman with two young children would be stupid enough to murder a strong, well-employed husband in an attempt to "catch" a man like that, no matter how attractive she found him personally.

Secondly, Klecker admitted that he had told between 12 and 25 people his "panting vixen" story since the murder had happened. This, of course, made him look like a locker-room boaster.

Finally, it was revealed that Klecker had, two weeks after the murder and while out on bail, traveled to San Diego and hastily married his sweetheart there. Had he done that on the spur of the moment? Or was there some reason he wanted her to be kept from testifying against him?

After this day of revelation, the state continued to stand by its star witness, but the smart money shifted from "conviction" to "acquittal." The tone of the newspaper coverage shifted as well, as the papers mostly stopped calling Louise Agee "The Grim Widow."

Basically, at the conclusion of the trial, everyone was utterly baffled by what might have happened, but it was clear that there just wasn't enough evidence for a conviction. Weird inconsistencies remained -- Louise Agee's testimony that she heard her husband cry out when his windpipe was severed, witnesses testifying that she'd told them she only married Harry to please her folks, the apparently un-slept-in bed, and a few other things -- but by the end of the trial, most people were convinced she hadn't done it.

It took the jury just half an hour of deliberation to return the "Not Guilty" verdict.

Louise Agee took the good news with the same sang-froid with which she'd greeted most of the rest of the events of the trial, and shortly afterward she left with her father and in-laws on an auto tour of the Oregon Coast. Later she returned to Portland and offered her services in any way she could to help the police find the "real killer"; but nothing seems to have come of this.

Early the next year, The Oregonian reported that police were suspicious that a notorious burglar known as "The 5 O'clock Burglar" might have been the killer. This burglar had been very active in Portland up until the time of the killing, then laid low for eight months before starting up again. Similarities in his methods -- he liked to break in in the middle of the night and steal while his victims slept, and took mostly low-value items like silverware and trinkets -- led the cops to think it was the same person.

The theory would be something like this: The burglar gets into the house, grabs a bunch of loot, takes it outside and stashes it in the bushes by the window from which he expects to leave the house. When he goes back in, Harry Agee wakes up. Burglar slashes at him with the knife, cutting his throat just after he yells for help, and runs for the door.

Or maybe the burglar was already in the house when the Agees came home, and was trying to sneak out without being heard.

In any case, that seems to have been the final word on the killer of Harry Agee. The Five O'clock Burglar was caught a couple months later, and turned out to be just an old jailbird well known to police.

As far as I've been able to learn, nobody ever figured out for sure what happened that night.