Another billion for culvert removal, replacement 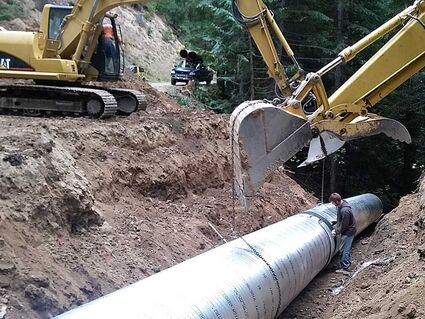 A lot of culverts running under roads and bridges coulds be upgraded under the federal infrastructure bill.

The $1.2 trillion infrastructure package recently approved by the U.S. Senate includes a $2.855 billion investment in salmon recovery and ecosystem restoration programs, as well as tens of billions of dollars allocated for water infrastructure.

The bill, which has moved on to the U.S. House of Representatives, awaits decisions on final passage this fall.

Language in the Senate version includes $1 billion for the U.S. Department of Transportation to create a new program aimed at removing, replacing or restoring culverts. Those expenditures are targeted on recovery of salmon passage and habitats. It wqould be the first federal program devoted entirely to culverts.

The money would provide grants to states for the removal, replacement, and restoration of culverts to address flow of water through roads, bridges, railroad tracks, and trails. It would include a competitive grant program to be administered by the Department of Transportation in consultation with the National Oceanic and Atmospheric Administration (NOAA) and the US Fish and Wildlife Service.

Projects have included fixing or removing obstacles to fish migration, opening up streams for salmon habitat, planting trees and shrubs along streams to provide ideal habitat conditions, decreasing the amount of soil flowing into streams, changing river flows and opening miles of transition areas for salmon headed to and from the sea. According to NOAA, several studies indicate that a $1 million investment in watershed restoration creates between 13 and 32 jobs and $2.2 and $3.4 million in economic activity.

Another $400 million for the creation of a new community-based restoration program would focus on removing fish passage barriers – with 15% of the money set aside for Tribes and Tribal partnerships. Another $200 million is for the U.S. Fish and Wildlife Service's National Fish Passage Program.

Also with fire in mind would be $500 million to develop fire control points, including the creation of fuelbreaks. $200 million is planned for removing flammable vegetation to create biochar or innovative woodproducts, with a note for agencies to consider working with youth and conservation corps, and engage with Tribes and veterans.

Improve healthy, sustainable transportation options for millions of Americans by modernizing and expanding transit and rail networks across the country, while reducing greenhouse gas emissions. The Plan is the largest federal investment in public transit in history and is the largest federal investment in passenger rail since the creation of Amtrak.

Repair and rebuild our roads and bridges with a focus on climate change mitigation, resilience, equity, and safety for all users, including cyclists and pedestrians. The Bipartisan Infrastructure Framework is the single largest dedicated bridge investment since the construction of the interstate highway system.

Build a national network of electric vehicle (EV) chargers along highways and in rural and disadvantaged communities. The largest investment in EV infrastructure in history, the Bipartisan Infrastructure Framework will accomplish the President's goal of building 500,000 EV chargers.

Electrify thousands of school and transit buses across the country to reduce harmful emissions and drive domestic manufacturing of zero emission vehicles and components.

Eliminate the nation's lead service lines and pipes, delivering clean drinking water to up to ten million American families and more than 400,000 schools and child care facilities that currently don't have it, including in Tribal nations and disadvantaged communities. The Plan is the largest investment in clean drinking water and waste water infrastructure in American history.

Connect every American to reliable high-speed Internet, just as the federal government made a historic effort to provide electricity to every American nearly one hundred years ago.