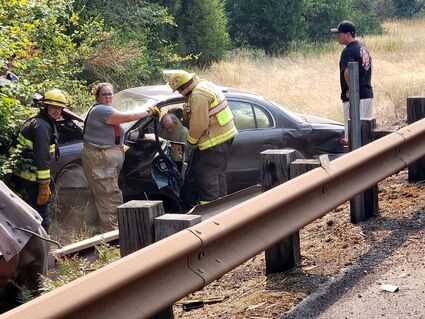 RAINBOW: First responders from the Upper McKenzie Rural Fire Protection District quickly responded last Thursday to the report of a single vehicle accident, with entrapment, at 54947 McKenzie Hwy. According to Lane County Sheriff's Office reports, the driver, 72-year-old Akkiva Vonmendelssohn of Blue River, reportedly fell asleep and struck a guardrail at 3:18 p.m. A witness told investigators that the vehicle had been traveling eastbound at approximately 50 mph prior to the crash. Vonmendelssohn was transported to an area hospital where deputies responded to take a report.