A night of remembrance

A world of thanks - McKenzie Strong 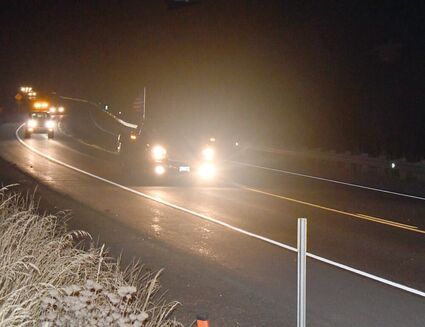 A long commemorative procession of vehicles drove from Rainbow to Leaburg on Monday night to mark the first anniversary of the Holiday Farm wildfire. Participants, with emergency lights flashing, were lead by first responders. Vehicles began their drive at 8:30 p.m. - the same time the destructive blaze began on September 7th of 2020 - and ended at the western edge of the fire's burn zone. It took close to five minutes for the long string of lights to pass by onlookers.

Monday night, September 6, the McKenzie Community came together, impressively, to commemorate the Holiday Farm Fire which burned and overturned our beautiful River Valley and lives. The procession of around 50 emergency and personal vehicles and over one hundred residents, staged at the old Rustic Skillet and Harbick's Country Inn parking lots, just East of where the Fire allegedly first ignited. At 8:30 p.m., around the time last year's Fire started down our Valley, the procession headed west, down River, through Blue River on Blue River Drive, and on toward the Leaburg end destination.

Many McKenzie Valley residents either joined the procession where their driveways intersected the McKenzie Highway or showed support with lights and car horns and heartfelt hand-waves.

Needless to say, not all of the folks remained dry-eyed, either watching or driving. As much as it was a commemoration of a historic and devastating event, the procession was equally a testament to the strength, resiliency, commitment, and compassion the McKenzie River community has exhibited this past year.