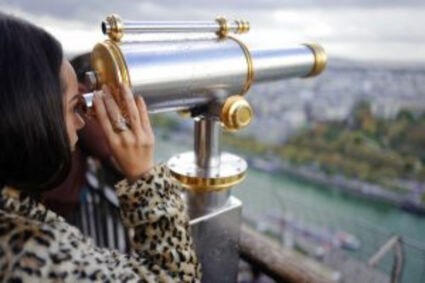 o. Four years ago, I met a wonderful guy. Unfortunately, our career paths took us to two separate continents. We have been "together" off and on for the last four years, but physically with each other for about a week.

We talked through email with the occasional phone call thrown in. When he proposed, I knew it was coming and did somewhat dread it, because I wasn't certain what I would say.

When he did propose, I almost too quickly said yes. I was overjoyed at the time, but as these past few months have gone by (we are still on separate continents), I've been in turmoil.

It almost seems I am doing this because it's what everyone expects or wants. But this is not what I want. I really want to let him know I don't think either of us is ready for marriage.

But most everyone already knows we are engaged. It wasn't until after I went back to work that I realized I did not know that much at all about him. And he has a drinking problem, in my eyes.

When we talk, it's always about how he went to this bar and passed out in the bed of his friend's truck. One time, he told me he had just gotten rid of his "little black book." That was two weeks after he popped the question.

We live on different oceans. Would I have to mail the engagement ring back to him?

How can I tell him I think neither of us is ready for marriage, especially to each other. I love him with all my heart, but I think it's time we cut our teenage strings and moved on with life.

In your letter, you said some magic words. You said, "This is not what I want."

"This is not what I want" is truly a magical phrase. It releases us from the outlook and demands of others.

Knowing someone through email and the occasional phone call differs completely from in-person, day-to-day living together. At a distance, you can be whoever you want to be to the other person, because you are not together.

Two weeks after the engagement, he ditched his little black book. So, he has been intimate with and dating others this entire time. He was not exclusive with you. That part of the relationship was lacking between you, and he had that part with other women.

Then there is the drinking. He acts like a young guy with no responsibilities, and you admit this was like a teenage romance. But you are at an age where your careers are all important, and in four years, you have been together only a few days.

In the harsh glare of reality, you see you must go your separate ways.

When a relationship ends, people often see it as a loss when it is really a win. Sometimes it takes an engagement or a wedding before people understand the connection simply wasn't there.

You were pen pals. The relationship was mostly in your heads. The engagement ring broke the bubble of the fantasy. Now comes the final scene in your long distance, pen pal relationship.

Find a safe way to return the ring. You are now mature enough to understand that a magical marriage does not begin with a wish to stop the wedding.