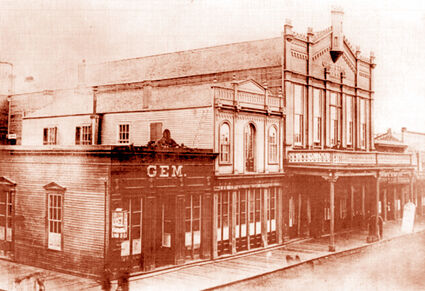 First Street, probably farther north. The Oro Fino was rumored to be a front for prostitution, and was partly owned by former Portland police chief James Lappeus.

Joseph E. Swards was 16 years old when he left his native Philadelphia as a brand-new apprentice seaman on the barque Geo. F. Manson, bound for Astoria and Portland. He would turn 17 at sea, in July of 1878.

By the time he was 18, he would be doing life without parole for a crime he didn't commit.

The facts of Joseph's story are clearly laid out in the Portland newspapers, and they read like a 19th-century cautionary tale - the kind that used to be made up to demonstrate the dangers of playing with matches, socializing with "gypsies," etc.: A young man, seeking adventure, gets careless and comes to a bad end.

Sailing off to adventure

I haven't been able to learn why young Joseph shipped out - whether it was for the romantic idea of adventure at sea (still a thing in the late 1870s, although fading fast) or to escape from something unpleasant at home. Nor do I know how he was treated on this, his first deepwater voyage, although as an apprentice he would have been very low on the pecking order, so it's likely it wasn't comfortable. But however lousy his life had been before his arrival, it was a palmy paradise by contrast with what awaited him in Oregon.

After he arrived in Portland, Joseph does not seem to have even considered going back to sea. Of course, he didn't think about much of anything at first. He was young and free with money in his pockets, loose in a wild and hard-partying city. Surely he was looking forward to an epic blowout.

However, he immediately met up with a man named Martin Tracy, who kept a grocery store on First Street. Tracy, standing at the door of his store, invited the lad in for a beer as he walked by, and Joseph naively took him up on it.

"I drank a glass and a half and then 'went away'; I was tight," Joseph testified, at a subsequent inquest. "He must have put something in it. Then we went to bed."

It's hard to tell for sure, through the fog of Victorian sensibilities and 150 years, if this meant what it sounds like to the modern ear - that Joseph was drugged and sexually exploited on his first day in Portland. But it probably did, because later that night, Tracy's wife caught Tracy "pouring something on me in bed, or trying to" - and, it seems, kicked him out.

So Tracy and young Joseph left together, going to a boardinghouse, where they stayed for several nights - and met another drifter by the name of James Johnson.

A few days later, Joseph said, Tracy "left for the mountains" - an 1870s colloquialism for going on the lam, which seems a strange thing for a storeowner to do - and the lad was once again at loose ends.

"Johnson asked me what I was going to do," Joseph testified later. "I told him I was going to work; he said he was going to hunt work too, and told me to stay with him and we would board in the Norton house. ... I told him I had no money except a dollar and a quarter; he said never mind, that he had money and would pay my board."

The two of them stayed at the Norton house for a few days, skipped on the board bill, then stayed in a hotel for two nights in order to steal some blankets. Then they met up with another drifter by the name of Archie Brown; the three of them "borrowed" a rowboat, crossed the river and walked down the railroad tracks to Oregon City. Johnson and Brown made Joseph stay and guard their camp while they looked for work - at least, that's what they said they were doing. Actually, they were trying to rob the post office. But they were watched so closely that they thought the better of it and returned to camp.

So the three of them headed back to Portland again, setting up their camp just outside town, and Joseph heard his two adult companions talking about pawnshops. Still in need of work, and subsisting on potatoes and turnips stolen from gardens by night, they had decided to pawn the stolen hotel blankets - or so they said.

On August 20, the three of them left their camp and went to Portland to pawn the blankets. It was a day Joseph would remember - and lament - for the rest of his life.

"When we got to Second Street, where Mr. O'Shea's shop is, they told me to wait on the corner, and they went into the store," Joseph said. "They were about ten minutes, and I went down to see what they were doing."

Joseph didn't know it, but when he opened the door of O'Shea's pawnshop, he was not only walking into a store - he was also walking into the penitentiary. Because Johnson and Brown were not there to pawn blankets. They were there to rob the place. Had he stayed on the corner as instructed, no one would ever have known he was connected with the robbers in any way. But now he was dawdling in the shop, waiting for them to get done with their transaction so they could all leave together.

While he waited, standing near the front window, he noticed two boys across the street looking at him, and he smiled, winked and wagged his finger at them. They thought this was odd, so they continued to watch him.

Then suddenly there was a flurry of movement behind him, and a sickening thump.

"After I heard the first groan, I looked and saw Brown strike O'Shea again," Joseph said. "He struck him with a piece of iron ... it was about 18 inches long and about three-quarters of an inch round."

Now, too late, Joseph tried to run for it - but nothing doing. "Johnson told me I had got myself in trouble by coming in there, and told me to stand at the counter and pushed me away from the door," he said, and locked the front door.

Meanwhile, the boys Joseph had wagged his finger at were figuring out what was going on. They ran to get a nearby police officer - and the chase was on.

The three of them broke out a back window and fled, hampered by several pounds of gold, jewelry and pocket watches. The cop was unarmed, but fast gaining on them. Brown pulled his pistol, a big .44-caliber cap-and-ball Colt Navy revolver that he'd probably just stolen from the pawnshop, and turned and sent a bullet zipping past his ears.

Brown didn't mean to hit the policeman; he just wanted to scare him off enough to gain a little distance. And, in fact, he didn't hit the policeman. The bullet from the revolver flashed past the cop -

- and lodged in the heart of 14-year-old Louis Joseph, a local youngster who'd come to see what the fuss was about.

"I'm shot!" gasped Louis, and collapsed to the ground, and died a few seconds later.

As a distraction, this unhappy event seems to have worked. The three of them got away, stealing a wagon and racing off into the woods outside of town.

Outrage swept the city. A $250 reward was promptly offered, then increased to $500. The three fugitives did the best they could to avoid capture and leave the area, but every eye was peeled for them. Even the baddest bad guy in town, shanghai artist Jim Turk, joined in the hunt for the murderers. Young Swards was captured the very next day; Brown, whose real name was Avery, was taken at gunpoint by the landlord of a boardinghouse he'd checked into; and Johnson was captured in Los Angeles.

The trials of the three men got under way in December, and in January they were all found guilty. Johnson and Brown were sentenced to hang, and Swards, convicted of second-degree murder, drew a life sentence in the state penitentiary.

The Morning Oregonian, for one, thought the unhappy teenager was getting off easy.

"It is not easy to see why Swards ... is not as criminal as his associates, who are under sentence of death," the paper opined in an editorial. "But various considerations, among which are the youth of the prisoner and the probability that he was not the originator of the scheme of robbery which led to the murder, seem to have inclined the jury to leniency."