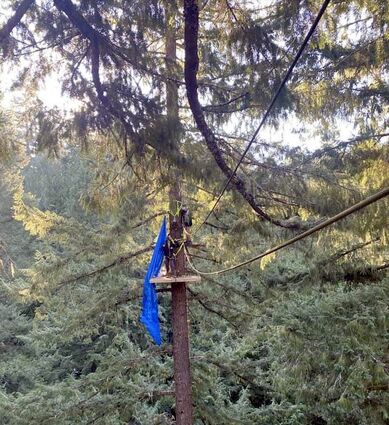 "If you buy this sale, you buy us too," according to statement to local timber companies from protesters who are occupying a tree stand in opposition to a 74,000 acre U.S. Forest Service timber sale in the upper McKenzie River Valley, east of McKenzie Bridge.

MCKENZIE BRIDGE: Officials describe it as a project that will provide a sustainable timber supply, improve forest diversity and manage roads. Opponents counter that it threatens old growth forests.

"It" is the Flat Country Timber Project, a timber sale that encompasses 74,063 acres man-aged by the U.S. Forest Service along with 28 acres of private property. Those acres extend from Scott Mountain to the McKenzie River, and include the Boulder, Kink, White Branch and Lost Creek watersheds.

In his January, 2021 record of decision that approved the sale, McKenzie River Ranger Darren Cross wrote that, "Fire has been a dominate disturbance in the project area. Records indicate 194 fires occurred in the Flat Country project area from 1970 - 2018. However, due to fire suppression, most fires were suppressed at less tan five acres within a few days of ignition."

Members of Cascadia Forest Defenders recently climbed and occupied trees in the proposed Flat Country timber sale to protest what they say is part of the current administration's ongoing logging of carbon-rich old growth forest.

"As the climate crisis progresses, it's completely indefensible for the Biden Administration to continue to sanction the logging of these critical old growth forests," said Trout, one of the tree-sitters. "While our politicians decry the continued destruction of the Amazon rainforest in Brazil, they are conspicuously silent as our own rainforests are lost to industrial logging."

"Competing demands placed upon the Forest Service necessitate that I make decisions for the responsible management of ecosystems and resources to fulfill the mission of the Forest Service and meet the requirements of laws and regulations," according to Cross. "Every effort was made to develop and choose an alternative that best responds to the components of the purpose and need, desired conditions, objectives, public and agency concerns, and maintains key resource values. I understand that my decision may not be acceptable to all members of the public. However, I believe I have chosen the best course of action to meet the needs identified for land management in the project area."

While climate-driven wildfires have raged across Oregon in recent years, activists say that they are occupying the sale in order to protest not only the Flat Country sale, but ongoing old growth logging on public lands and the greenhouse gas emissions associated with industrial timber harvest.

Cascadia Forest Defenders is calling on Senators Wyden and Merkley to join Rep. DeFazio in opposition to the sale, and to the industrial logging of old growth and mature forests on public lands. 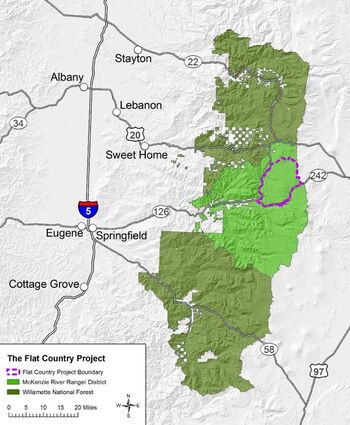 "Senator Wyden claims to be an environmental champion, yet it is more obvious than ever that the old growth logging that he supports causes nothing but climate chaos," said Peter Williams, an organizer of the occupation. "It is time for him to show real leadership and call for an immediate ban on logging mature and old growth forest on public lands."

Up to ten protesters used climbing gear to access tree sitting platforms 113 feet above ground on September 14th. They say they have no intentions of coming down unless the sale is called off.

Implementation of the project was authorized immediately when the District Ranger signed the decision. However, officials say it may be more than a year before any logging activity gets underway.