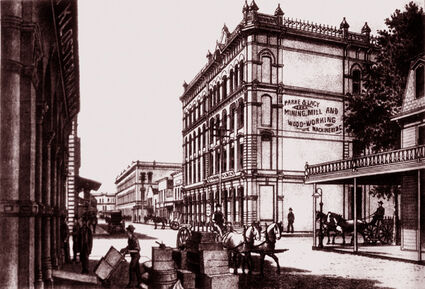 A drawing published in 1889 showing the intersection of Front and C streets; C street has since been renamed Couch. Jim Turk's sailor boardinghouse was located on C Street between Front and First, a half-block beyond the right-hand side of this image.

The "shanghai artists" of old Portland and Astoria were all a fairly secretive lot. But none of them were more mysterious, in quite so many ways, as the man who started the whole shanghaiing scene in Oregon - a burly, hard-fisted bar fighter named Jim Turk.

Jim Turk was a slum lord who lived in his own slum, a drunken brawler who got hauled into court for battery dozens of times, an abusive husband, a shanghaiier of sailors, a whorehouse operator and a dishonest clothing salesman.

Oh, and he was also the equivalent, in 1880 dollars, of a millionaire.

Here's Jim's story, or what we know of it anyway:

Jim Turk was born in England in 1832, and the Oregonian reported upon his death that he was "a man of family." However, he was, by the age of 16, in America and fighting in the Spanish-American war - a very odd thing for a "man of family" to be doing, a bit like a successful lawyer's son joining the French Foreign Legion today.

By 1866, Turk had gotten married, to a statuesque beauty named Catherine who was at least his equal as a boozer and a brawler, and the two of them had opened a boardinghouse in San Francisco. They had two children, both sons: Charles and Frank.

Then, a few years later, the Turk family suddenly quit San Francisco and moved to Oregon. Jim apparently ran a saloon in Pendleton for a while, then moved to Portland and opened Oregon's first-ever sailor's boardinghouse there.

At the time, the sailor's boardinghouse business, also called the "crimping" business, was one of the most disreputable occupations in society, and with good reason. It was basically a forced-indebtedness scam. Here's how it worked:

You rented the cheapest building you could find, close to the waterfront, stocked it with crude beds, and invited single men to stay there "on credit." You marketed it chiefly to sailors, but laid-off loggers and naïve farmers were welcome too. Hobos could avoid getting nicked for vagrancy by checking into your place, so you'd get some of them as well. No money changed hands; it was all on credit.

Then would come a day when one of the ships in the harbor would need sailors, and the men in your boardinghouse - who by now owed you more money than they could pay - would be required to discharge that debt by signing onto that ship. You'd present your bill for room and board to the captain of the ship, who'd pay you and deduct it from the sailor's wages, and he'd also slip you a bonus, a finder's fee of sorts, which was commonly called "blood money."

Of course, you had to be a number-one fighter to make this work, because nobody ever wanted to go to sea.

On those occasions when a ship needed a crew and your boardinghouse was empty, you'd go out drinking, meet a new friend at the bar and dope his drink. He'd wake up on ship, with his name forged on the ship's articles and often with a U.S. Marshal standing guard to make sure he didn't jump overboard and swim to shore before the ship got out to sea. This was, of course, what we know as "shanghaiing."

Jim Turk and his sons did all these things, although they'd never admit to shanghaiing. They ran some other scams as well; on at least two occasions they sold sailors suits of marine clothing and then secretly stole them back before the ships sailed. The customer was left having paid for clothing he didn't get, and no way to fix the issue short of diving overboard and becoming a deserter - which one guy actually did.

All these tricks were standard procedure in San Francisco's colorful Barbary Coast waterfront in the 1860s. Turk simply brought them to Portland and ran the system here, like a new McDonalds franchisee.

As the 1870s wore on, Turk became a familiar figure in the city courthouse. He loved to drink and he loved to fight, and he was hauled up on battery charges literally dozens of times. Each time, he paid his fines and posted his bail in cash. Turk never seemed to have any trouble with money.

Then, in 1877, an odd little item appeared in the Portland Morning Oregonian:

"A gentleman from San Francisco, by the name of T.J. Zingsen, now stopping at the Norton House, informs us that he came expressly to bring the astonishing news to Mr. James Turk, of the Portland Sailor Boarding House, that he has inherited about 20 or 30,000 pounds, which was left to him some years ago without his knowledge," the paper remarked.

Turk, sure enough, suddenly started making large purchases. He started by purchasing a palatial one-stop sin center called the "Grand Central Variety Saloon," which appears to have been one of the earliest of the much-maligned "variety theaters" of Portland. These theaters played low-rent Vaudeville shows, after which the actresses would come out and vamp the customers to induce them to buy overpriced drinks. And, as historian Barney Blalock points out, the fact that the Grand Central had 17 rooms in it strongly suggests it was also a bordello.

Turk also bought some land, and a restaurant in Astoria that may or may not have been more than just a restaurant. But his lifestyle didn't change, and neither did his business practices.

But in 1890, Catherine died. Jim remarried a little later, but his heart wasn't in the crimping trade any more, and increasingly he left that to his sons. He died five years later on, in Tacoma, at the age of 63.

The Morning Oregonian, apparently felt some pressure to say something nice about this freshly-dead thug, but this was no easy task. "While he possessed a rough exterior, he had a great many friends among his own class," the obit writer managed. "He was generous and would do a friend a good turn, when an appeal to his better nature was made."

The mystery of Turk's money

This "generosity" comment addresses the real mystery of Jim Turk: Where did his money come from? Even before his inheritance (if that's really what it was), he always seemed to have plenty of it. Was he, perhaps, a remittance man - a son of a wealthy family who, having embarrassed the family beyond redemption by some act, was sent into exile with a monthly cash payment contingent on his never returning to the family home? Perhaps - but he was fighting in the Mexican-American War when he was 16, which means he would have had to commit his great sin at the age of 13 or 14 years; this seems very unlikely.

It also seems bizarre that Turk didn't change his lifestyle in any meaningful way after inheriting this money. He went on brawling, swindling, shanghaiing and stealing, just like before. Moreover, I haven't found any reference yet that tells whom, specifically, Jim Turk inherited that money from.

So, is it possible that Jim Turk's money came from somewhere else? Perhaps it was the fruit of some epic swindle perpetrated overseas. Maybe it was the proceeds of a decades-long blackmail scheme that finally ended with a lump-sum payment. Or maybe he'd robbed a payroll train ... who knows?

All we can really say is that the pieces don't all add up. But we can also say, with absolute confidence, that without Jim Turk, Portland would have been a far less colorful place.