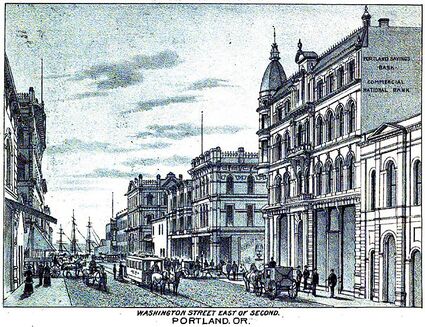 A street view looking toward the waterfront from Second Street along Washington Street in downtown Portland, in 1886. Larry Sullivan's notorious boardinghouse was ten blocks to the left of the artist's viewpoint in this work, at Second and G (Glisan) streets.

Sometime around 1897, complaints suddenly started pouring into the headquarters of shipping companies in Liverpool and Hamburg from the captains in charge of their ships. It seemed something new was happening in the faraway American port city of Portland.

It seemed the local sailors' boardinghouses operators - known as "crimps" - had suddenly started playing dirty. Once a ship arrived in port there, the sailors would all vanish - and the ship wouldn't be leaving the city until its captain had paid thousands of dollars to the owner of the boardinghouse in which they were staying.

Though the skippers had always had to pay "blood money" bonuses to the crimps to get crew members, they'd never before had to pay so much, for so many men. It was costing the skippers a lot of money. And the few who protested quickly found it cost them plenty more; it seemed as if the entire city of Portland was in on the scam. Complaining to the police got a skipper, at best, nothing - and at worst, an expensive delay in port while legal matters were sorted out and possibly even a little time in the local hoosegow, usually followed by a sudden increase in the crimps' fees.

All the captains knew exactly who was to blame for this dreadful new turn of events. It was the premier boardinghouse owner in Portland: Larry Sullivan.

"You cannot believe how these fellows are working," wrote the captain of the German ship Alsterufer, in December 1900. "It almost seems as though they hold the whole law and authorities in their hands. Sullivan himself said to the German consul, 'I am the law in Portland!'"

Larry Sullivan was an enigmatic Portland character who was far and away the most successful of Oregon's shanghai artists - a clever con man with friends in high places, who also happened to be an active and successful brawler. It was he who engineered Portland's reputation as the worst port on the world for a ship to visit, around the turn of the century. He did this by forging the city's unruly collection of crimps into an exclusive business cartel, and by establishing political connections that gave his cartel the local political cover they needed to shake those skippers down.

Lawrence Mikola "Larry" Sullivan was born in St. Louis during the Civil War and came out to Astoria when he was around 20 years old. It's not clear why he came to Oregon; chances are pretty good that he was running from something since Oregon was at the time the jumping-off place of the West - the farthest corner of the country in which one could hide out without having to live in a hermit's cabin.

Astoria's No. 1 prizefighter ... but not Portland's

Larry was already an accomplished prizefighter when he arrived in Astoria and quickly set about punching his way to the top of the local boxing scene. At that time, prizefights were big stuff in Oregon towns; they were a public spectacle that folks came around from all over to see and place bets on, and top prizefighters were like rock stars.

The problem was, it wasn't the sort of gig a fellow could plan to retire from. Much of it was done the old-fashioned way - with bare knuckles, under London Rules, which means each round keeps going until one of the boxers hits the deck. It's a tough way to make a living.

This wasn't so much a problem for Larry in Astoria, where he was pretty much the best fighter in town and wasn't getting defeated much. But when Larry moved to the bigger city of Portland, he suffered a couple painful defeats and at least one pyrrhic victory - a bloody 75-round marathon brawl - that has to have left him considering other options.

So Larry changed occupations. He joined forces with some friends from Astoria - brothers Peter, Alex, and Jack Grant, whose father had been a pioneering shanghaiier there - and opened his sailors' boardinghouse in a big old warehouse, deep in the North End.

In the late 1800s, there were several of these in Portland, including Jim Turk's place and, later, "Mysterious" Billy Smith's joint on the East side of the river. Boardinghouse operators, or "crimps," tended to be either professional boxers or simply excellent fighters, because the sailors they housed were often reluctant to fulfill their contractual obligations to go back out to sea when it was time. Larry's early training made him a great fit for his new career.

And it was an open secret that all crimps, when their boardinghouses were empty and a ship needed a man, took a bottle and some knockout drops and went looking for a rube to shanghai.

As a "boarding master," Larry was successful almost immediately. What distinguished him from the rest was not so much his fighting ability as his political skill. Larry Sullivan is the one who figured out what a great political asset a sailor's boardinghouse is. Sailors in the house are welcome to vote, sometimes over and over and over, and to go around from ballot box to ballot box and do it all again. The waterfront was full of transient guys with no local ties, who could vote as often as they liked without anyone ever being able to trace them.

Larry soon was a part of state Rep. Jonathan Bourne Jr.'s smoothly rolling "free-silver Republican" political machine, delivering bales of votes for Bourne and his friends at every election. Bourne was also a member of the three-man Portland Police Commission, which means this alliance gave Larry law-enforcement cover - a key component in what he was about to do next. 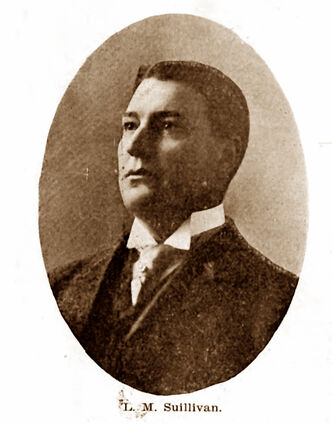 This portrait of Larry Sullivan shows him at age 43. It's from the program of the notorious Gans-Nelson boxing event he was promoting at the time, in Goldfield, Nevada, shortly after he left Portland.

By about 1897, Larry was ready to make his move. Through his political connections, he had the support of pretty much the entire local law-enforcement community. The harbormaster, whom he'd jumped and beaten nearly senseless back in '93, was now disinclined to give him trouble. Through his careful cultivation of the local district attorney, he had an even more vital ally there. And he had forged an alliance - a sometimes rocky alliance, but a working one - with the other powerful crimps in Portland and Astoria, and forced the smaller and newer operators out of business with his fists.

It was time to make the ship captains pay. And next week, we'll talk about how he went about doing that.