Numbers at Leaburg Dam are in the average range 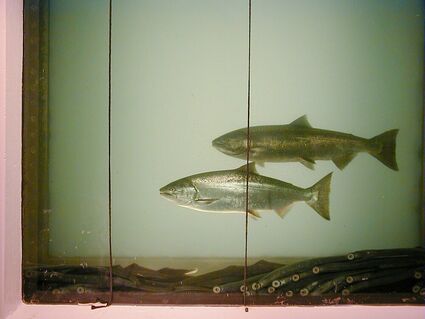 Salmon passing by a good grouping of lampreys at Willamette Falls.

LEABURG: Operations weren't normal for the Oregon Dept. of Fish & Wildlife teams counting salmon at Leaburg Dam this year due to a camera malfunction that lost some of the early data from March. In addition, the fish ladder was shut down a good portion of the summer when fish sorting was underway, causing all the fish to go through the left bank ladder.

During June 1st to mid-September, "We passed through somewhere in the neighborhood of 400 wild fish upstream through the fish sorter and were able to take out about 150 hatchery fish," according to ODFW Upper Willamette District fish biologist Jeff Ziller.

When those numbers started to drop off, workers installed a trap in the fish ladder itself. There they caught and passed upriver another 130 wild fish and caught almost 500 more hatchery fish for broodstock.

That last point was important because of the situation downstream at the McKenzie Salmon Hatchery where flows from EWEB's Leaburg power canal had been stopped because of leaks in the levee.

During the big rainfall of late September, a large number of fish came up the left bank ladder. In about a two-week period another 600 hatchery fish were recovered. In addition, close to 1,000 salmon came into the trap at the outflow near the back of the Leaburg Trout Hatchery that had been set up for steelhead.

"Having the right bank ladder shut down, running the fish sorter, and having the opportunity to only go up the left bank ladder caused a bit of confusion for those hatchery fish," Ziller thinks. Those conditions combined to cause the non-wild fish to go up the Leaburg Hatchery trap.

"We learned a lot of things that will really help us capture hatchery fish more efficiently next year," Ziller said.

For 2021, estimates are that the numbers of salmon returning from the ocean to the McKenzie River were in the normal range of from 1,400 to 1,500 fish. The return numbers for the Willamette River system are projected to be in the 40,000 to 50,000 range but haven't been fully tabulated yet.

There were concerns with higher water temperatures this year.

"We were in the 60's really early in the year for the McKenzie," Ziller notes. "Anytime you see those elevated water temperatures you can have a pretty high pre-spawning mortality."

Although some numbers from surveys of redd spawning beds were down, Ziller said they were "pretty Decent" upstream from the South Fork McKenzie, particularly in the Horse Creek and Lost Creek streambeds.