Shipwreck miracle was an inconvenient one 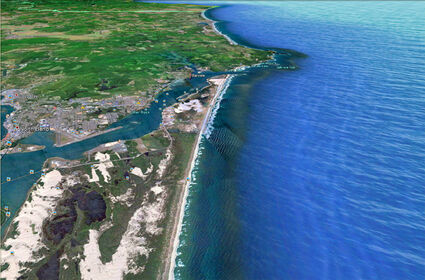 The site of Camp Castaway as seen on satellite imagery via Google Earth. The shipwreck took place on the beach close to the bottom of the frame.

It was January 3, 1852 - the middle of the night and the middle of winter, just off the middle of the Oregon Coast. The U.S. Army's schooner Captain Lincoln, carrying a detachment of U.S. Army dragoons and supplies to reinforce a garrison near Port Orford, was getting badly abused by the weather. Wave after massive wave descended on the hapless Captain Lincoln, opening up a thousand little leaks in its hull; the soldiers toiled below decks at the pumps, trying desperately to stay ahead of the rising water in the bilge. Trying - and failing.

Finally, Captain Samuel Naghel realized he had two options: Slowly let his ship sink lower in the water until it became unstable and rolled, which would surely drown every man on board; or, in a desperate gamble, turn and race for the black and unknown shore, hoping against hope that the ship would beach on sand instead of rocks.

The longer he waited, the lower the ship would sit in the water when she struck that beach. It had to be done - now.

"Hard over!" he bellowed to the helmsman, and the Captain Lincoln fell off the relentless southwest wind and raced westward.

They were still several hundred yards from the beach - far enough to drown most if not all of the men in the surf - when the doomed ship slammed into a sandbar.

"The writer had just retired for a short time, preparing to woo sweet Somnus and dream of those we left behind us, when a thundering crash was heard," soldier Henry H. Baldwin later wrote, recalling the incident. "The doomed bark quivered and tall masts, groaning, felt the deadly wound, her deck was rent asunder. Neptune's flood descended, deluging the hapless sons of Mars, who were below in dreams. For a short while it seemed that the sulphurous regions of the infernal were let loose; breakers roared, water dashed and splashed, men swore; then there came a lull, the wounded skimmer of the seas bounded onwards, her aged commander's voice was heard encouraging the panic stricken crew with the following words: 'Fear not, men, we're in deep water now.'"

Miraculously, the schooner had been washed off this deadly sandbar and into deeper water, closer to shore. Again the ship drove westward until it fetched up on the beach, the real beach this time. Breakers started sweeping over the decks.

Thoroughly soaked and bone-chilled, the soldiers and sailors huddled below, perched atop whatever would keep them out of the water, and waited for dawn.

A new day in a transformed world

When dawn came, they found that, whether by happy accident or consummate skill, Captain Naghel had managed to beach the ship at the apex of high tide. So when morning came, it was like a transition from hell to heaven. The ship was now high and almost dry, and the sailors lost no time in lugging enough kitchen equipment ashore to brew up a big hot pot of grog - there was, in the ship's cargo, plenty of whiskey - to lift spirits and warm toes. The day was dry and the sun was shining and every man in the group knew very well that he was phenomenally lucky to be alive.

Native Americans were everywhere, attracted by the fuss, and they were all of the friendly sort, eager to trade delicious cuts of elk and slabs of salmon for hardtack and extra Army uniforms. The ship had struck ground at what's now Horsfall Beach, at the root of the Coos Bay Spit, within walking distance of several sparkling-clean freshwater lakes.

As hackneyed as the term is, for the soldiers, it really must have been as if they'd died and gone to heaven.

Being good soldiers, the men immediately got busy salvaging all the stuff from their ship: Barrels and barrels of flour and sugar and whisky and lard were landed and stacked, along with everything valuable off their ship, which broke up a little more with each incoming high tide until finally it was in pieces on the beach. They also lost no time building sturdy tents with the ship's scavenged masts, timbers and sails.

But now the government had a problem.

What to do now?

If the ship had simply sunk, there would have been nothing to worry about. If the men had made it ashore without the supplies, ditto; they would simply have had to make their way south to Port Orford, and a ship would have come to get them, and they would have been back at work doing soldier stuff in a month.

But because they'd salvaged thousands of dollars' worth of goodies from the ship, the Army couldn't quite do that.

There was no way to bring a cargo ship in through the breakers to take on that freight. Geography made it impossible to get a wagon to them overland. The only hope was for someone to bring a ship across the unknown and fearsome Coos Bay bar, and nobody was willing to do that.

"The difficulty attending this undertaking arose from the fact that no vessel had ever been into the (Coos) River, nor was it supposed that any vessel could enter it," the Army's quartermaster wrote, in explaining the situation to Benicia Army Headquarters.

Of course, they could have simply made a gift of the supplies to the Native Americans who had been so helpful; all parties would have been helped by such generosity. But the Indians would have gotten the best of such a deal, and to the somewhat-spiteful minds of the military commanders, that made the idea unthinkable.

An "as-is, where-is" surplus sale was tried. Nobody was willing to bite, although a few local pioneers did come to the camp to inspect the wares; however, they seemed more motivated by a desire for a neighborly visit than any urge to buy stuff.

Finally, one brave skipper agreed to take on that fearsome river bar, and with Captain Naghel serving as a pilot, the schooner Nassau sailed boldly across that bar and came around to the inside of the spit on which Naghel had wrecked the Captain Lincoln. Naghel, of course, had never been across the bar before either, but he had spent five or six glorious months shipwrecked right next to it, and it appeared he'd used the time there to make some careful observations.

The Army got its supplies back, and didn't lose a single soldier; all the sailors survived the ordeal too. 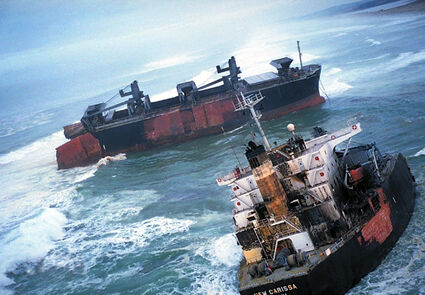 A century and a half after the wreck of the Captain Lincoln, another famous ship came to grief in almost the exact same spot: the wood-chip carrier New Carissa, in 1999.

And although the event went down in the annals of military disasters as an expensive and unfortunate event, the real benefit of the whole thing was the discovery that the Coos Bay bar - while certainly no pussycat - was not as impassible as had been supposed. Within a few years, the bay was in regular use.

By the way, about 150 years later, this same beach would be the site of another famous shipwreck - that of the stunningly ugly wood-chip carrier New Carissa, in 1999.