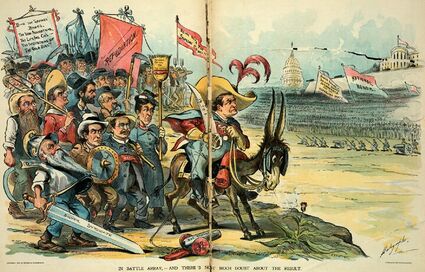 A political cartoon from an 1896 issue of Puck Magazine showing Populist candidate William Jennings Bryan at the head of Coxey's ragtag army, eyeing the White House.

Many people today think of the 1890s as a prosperous, carefree era - the term "gay '90s" (or even "naughty '90s) jumps to mind. But what most people don't realize is that much of that decade was spent mired in a massive economic depression

In many ways, the "Panic of 1893" was worse than the Great Depression. It brought us some iconic images that are still familiar today. The stereotype of the palatial Victorian "haunted house," as seen on innumerable episodes of Scooby-Doo, comes from the thousands of brand-new luxury homes whose owners, unable to pay for them, simply walked away and left them to decay. Also, it's no coincidence that the Snidely Whiplash-type villain of classic melodrama, with his handlebar moustache, swallowtail coat and silk top hat, is dressed in 1890s business attire.

The panic also brought us the very first "march on Washington," an organized event that became known as "Coxey's Army."

Coxey's Army - which at that time called itself the "U.S. Industrial Army" - was launched and led by an Ohio quarry owner and populist named Jacob Coxey. Organized along military lines, the U.S.I.A. was generally a disciplined, law-abiding group of unemployed tradesmen, who bitterly resented the plutocrat-owned newspapers of the day for constantly calling them "tramps and thieves" or "hobos." But in a couple of cities, the groups of men, trying to make their way to Washington, actually engaged in what you might call train robbery - seizing control of a railroad train and making it haul them eastward. Portland was one of those cities.

Oregon governor Sylvester Pennoyer, a populist, was sympathetic to the Coxeyites and asked the railroads to relent and carry the men east. The north-south Southern Pacific lines let the Coxeyites ride in unused boxcars, but at the eastbound lines, Pennoyer was emphatically rebuffed. So the Army was essentially stranded in Portland.

The old-school Establishment, led by the formidable Harvey Scott at the Portland Morning Oregonian, was disgusted by their presence. To Scott and his ilk, these were simply bums who would rather beg than work, and deserved their plight. The president of the Portland Board of Charities highhandedly informed the workers that in exchange for six hours of hard labor on street crews, the Board would give them two soup-kitchen tickets and a bunk - a deal that was probably designed to be rejected so that the Board could claim it was not refusing to help.

After recruiting another 400 or so unemployed tradesmen in Portland, the U.S.I.A. started thinking about departure. They made a couple of attempts to hijack eastbound trains, following the example of a group in Montana, but the Northern Pacific railroad people were onto them, and it didn't happen. So early one rainy April morning, the U.S.I.A. set out on foot along the railroad tracks, heading east toward Troutdale.

When they got there, they got busy trying to capture a train to take them east. Since the railroad was in federal receivership at the time - the failure of overextended railroads was a major cause of the Panic of '93 - this got a zealous federal marshal named H.C. Grady involved.

With the sheriff and a force of some 50 deputies, Grady traveled from Portland to Troutdale, apparently planning to make some attempt to arrest or disperse them. When they arrived, they found the U.S.I.A. lined up, apparently ready to march eastward again. It quickly became obvious that the entire town of Troutdale was sympathetic to the Coxeyites, and somewhat resentful of the gang of deputies. Crestfallen, the law-enforcement crusaders headed back to Portland.

The next day, Grady and the railroad people launched a plan to entrap the Coxeyites. They sent a train of passenger cars to Troutdale, each one with a copy of a court injunction ordering them not to seize any railroad property. Apparently assuming the railroad was helping them out, the men happily boarded with their baggage, at which point Grady read the injunction to out loud to them, then hustled up to the train engine and climbed aboard. Then, without the cars attached, the engine raced away to the nearest telegraph office, from which Grady cabled back to Washington, D.C., that a gang of Coxey's Army had seized a train.

"Am powerless to equip enough deputy marshals to gain possession of train," he wrote. "The situation is critical and the men are desperate. Please advise."

The Justice Department in Washington, though, knowing that the men were only in possession of a handful of Pullman cars, still did nothing. So Grady took one further step:

He loaded a special train up with two high-ranking executives of the Northern Pacific and Union Pacific railroads and they drove it to Troutdale, ostensibly to pick up a couple train cars full of meat. The idea seems to have been to dangle a hijack-able train engine in front of the Coxeyites, hoping they'd take the bait and force Washington's hand.

It worked. When the train arrived, the Coxeyites were expecting it - someone must have leaked the word. They firmly but politely took possession of the engine, sidetracked the car full of executives (had they not done this, they probably would have all been charged with kidnapping later) and headed off east with the cars full of men.

Grady's gambit had finally forced the Justice Department's hand. The soldiers were duly deployed and they met the eastbound train at Arlington, where the Coxeyites were arrested and the train turned around and sent right back to Portland.

In Portland, a very large crowd assembled to greet the train - about 1,500 people, out of a Portland population in the 50,000's. The crowd was large enough, and loud enough, that Grady and the local cops worried about riots. Again Pennoyer was asked for help from the state militia. Pennoyer, in one of the few really good decisions of his term, shot back a telegram pointing out the ridiculousness of the federal government asking him to underwrite Grady's bad decision.

The next day, in court, all 434 of the captured Coxeyites were sentenced to nothing more than a stern lecture by the judge. They apologized for their behavior, promised to abide by court decisions in the future, and were sent on their way. The general population of Portland, overwhelmingly on their side despite the increasingly screechy editorials of the Morning Oregonian, seemed quite happy with this outcome. Grady, on the other hand, was beside himself.

On the very next day, during peaceful but spirited city-wide May Day celebrations mostly unrelated to Coxey's army, he sent another telegram back to Washington.

"Events here bordering on insurrection. Fully anticipate trouble," he wired breathlessly. "Can you wire me requisitions ... for 50 rifles - also sidearms and 150 rounds of ammunition?"

The response from Washington seems to have been silence. Maybe they were finally onto him.

About 100 of the men quit the U.S.I.A. after this mass arrest, saying they'd had enough. The rest of them disbanded into groups of three or four and started hopping freight cars to get east to Washington D.C. 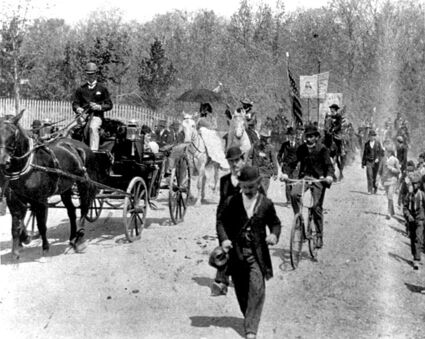 Coxey's U.S. Industrial Army - now rechristened the "Commonweal Army" - moves out of its camp in Washington, D.C., in late summer 1894. Few if any of the Oregon members made it all the way out to the capitol.

Nationwide, only about 500 members of Coxey's Army made it to Washington; the rest stopped along the way, either giving up or finding work. Those 500 were pretty much ignored upon arrival, although some - including Coxey himself - were arrested for trespassing on the capitol lawn.

Three months later, the protesters were dispersed by companies of militia, and Coxey's Army faded away into popular memory.