This photo spread appeared in the Morning Oregonian on Jan. 1, 1924, introducing the three proposed bridge projects. Although the Ross Island and Sellwood bridges ended up looking substantially different from these sketches, the Burnside Bridge did not.

Early Portland was a relatively corruption-friendly town. But even the best of us have our limits, as three Multnomah County Commissioners learned the hard way in 1924.

In that year, the Portland area had a serious traffic congestion problem. The main source of the trouble was the Burnside Bridge, a swing-span setup that was at the time only 30 years old. However, it had deteriorated very badly, and was no longer considered safe. A new bridge was desperately needed.

Luckily, in 1922 the three-member Multnomah County Board of Commissioners had gotten voter approval to take out almost $5 million in bonds to build not one but three new bridges across the river. Relief was on the way: a replacement for the Burnside Bridge, plus brand new bridges that would become known as the Sellwood and Ross Island bridges.

Finally, on April Fool's Day of 1924, the Commissioners finally put the projects out for bids. Within the day, a very odd bid arrived from a consortium of contractors. They wanted to build all three bridges, and their bid was a package deal: All three bridge projects, or nothing.

The commissioners, who had until this point seemed to be in no special hurry, now sprang into action and moved with breathtaking speed. They pounced on the all-or-nothing bid, accepted it and slammed the door closed on the bidding process. The window had been open for less than 24 hours.

Unfortunately for them, they didn't move quite fast enough. Another bidder managed to slip in during this tiny window of opportunity and submit a bid for the Burnside Bridge. And the interloper's bid was a full half-million dollars cheaper than the all-or-nothing bidders had quoted for the Burnside Bridge part of theirs. The commissioners dismissed it breezily, noting that the all-or-nothing bidders had promised a bridge in 300 days, but the interloper's cheaper bid specified 500, and Portland needed a new Burnside Bridge right away.

It's not clear what the commissioners thought was going to happen as a result of this. After all, construction contractors who have major bids rejected for illegal reasons have a tendency to ask questions. But perhaps, knowing Portland's long and storied history of graft and corruption in government, they assumed the disappointed contractor's complaints would be brushed off as so much out-crowd whining.

If so, they were in for a big surprise.

It started the very next day with a comment from former Governor Oswald West, a widely respected political reformer who had been watching the situation closely. "Those who are putting over the deal are working fast," he told an Oregon Journal reporter, "and unless something is done at once the taxpayers of the county and city are going to get a wonderful trimming."

As the unsuccessful bidder hired lawyers and complained loudly about its treatment, Portland's other newspapers soon joined in the drumbeat of condemnation.

"The Oregonian thinks that $529,000 is a large sum to pay for 200 days' use of a bridge," the Morning Oregonian murmured with sedate disapproval, four days later.

The Oregonian's sister paper, the ever-feisty Evening Telegram, was a bit more direct. "Public indignation over the awarding of the contract for the three trans-Willamette bridges this week is universal," the editor wrote sternly. "No official act in the history of Multnomah County ever aroused such condemnation."

The astonishingly tone-deaf commission didn't budge. The city had really needed three bridges, they explained earnestly, and if they'd accepted the Burnside contract they would have had to reject the three-bridge package, and schedule another round of bidding, which would have delayed the Ross Island and Sellwood bridge projects.

By now aroused to full suspiciousness, the public couldn't help but wonder if they might have had more bids to work with if they'd left the bidding process open for more than one day.

The Commission also tried to explain away the half-million-dollar difference in bid prices by claiming the package-deal contractors were expecting to build the Ross Island Bridge at a loss, and the inflated bid for the Burnside span was supposed to cover that loss. This explanation sounded just as implausible then as it does today.

In any case, Chairman Charles Rudeen asserted earnestly, "as all the facts regarding the contracts become known we are confident it will be seen that we acted wisely and that the people of the county will approve our action."

Unfortunately for Rudeen and his fellows, the facts that soon became known were not the ones the commissioners had in mind.

One of the first of these was the fact that five days before the bridge placement plans were announced, Rudeen and fellow commissioner Dow Walker had bought options on 18 residential lots right next to what they - but nobody else - knew would soon be the west end of the Sellwood Bridge.

Another tidbit that soon became known - it can't be called a fact, but it was a widely believed rumor and was most likely true - was that all the insurance needs of the package-deal contractors were being handled by Commissioner Walker's insurance agency.

By April 9, a recall petition was making the rounds. It took just two weeks to swell to over 26,000 signatures, which was an astonishingly big slice of an electorate that numbered under 70,000 at the time. This meant all three commissioners would face a recall election the very next month.

And that wasn't all they faced, either. State Attorney General Isaac Van Winkle launched an investigation on April 13 and convened a grand jury, which eventually indicted Walker and Rudeen on charges of soliciting and accepting bribes, and accused all three of them of malfeasance for not accepting the lowest bid on the Burnside Bridge.

The criminal charges didn't stick; all the commissioners went free for lack of hard evidence. But the recall election was another matter. Rudeen and Walker were turned out of office by an 85-percent majority of voters, and the third commissioner lost to a 65-percent majority.

It was the fastest, most thorough and most emphatic "housecleaning" in Multnomah County history - before or since. 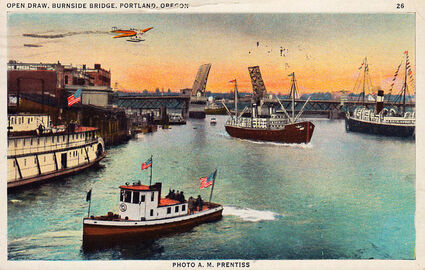 This hand-tinted postcard, postmarked 1931, shows the newly built Burnside Bridge drawn for shipping to pass through.

It's also worth noting that this recall was a big setback to the Ku Klux Klan, which had energetically backed two of the commissioners in the 1922 election. The Klan was a strong and growing force in Oregon politics at the time, but after the events of April Fools Day 1924, the "Invisible Empire" lost most Portland voters for good. But that's a story for another day.