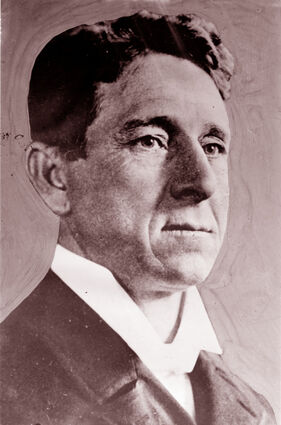 Dr. Harry Lane as he appeared at the age of about 60 when he was a U.S. Senator.

Many historians, when asked to cite the single biggest and most far-reaching government misstep in American history, will immediately start talking about the First World War. By getting involved with that conflict - subtly at first, by lending money to the Allies, and later directly with American boots on French soil - we made it possible for one side to crush the other and impose its will, rather than simply fighting to an impasse and being forced to negotiate peace. The world is still trying to recover from the aftershocks of that - particularly in the Middle East.

Such historians smile a bit when the topic of Oregon Senator Harry Lane comes up. Lane was one of a tiny handful of federal legislators who, for reasons of principle or partisanship, fought as hard as they could to prevent President Woodrow Wilson from taking the country into the fight.

It's a small smile, though. Because Lane paid a heavy price for that.

Harry Lane was a well-known and respected Oregon politician, a medical doctor by profession, born in Corvallis, the grandson of the first territorial governor of Oregon. He'd been mayor of Portland just after the turn of the century and had established a reputation as a man of principle - the worst enemy of the corrupt politicians, cops, and shanghai artists that were virtually running the city when he arrived. Although he didn't leave much of a long-term impact on those forces of corruption, he was able to suppress them during his two terms of office - long enough to put on a spectacular show at the 1905 Lewis and Clark Centennial Exposition, at any rate - and today he's remembered as the father of the Rose Festival.

He also had a strong reputation as a supporter of women's suffrage and an advocate for more respectful treatment of the remaining Native American tribes in the state.

He was also firmly opposed to any American involvement in the brewing conflict in Europe. And by early 1917, he was growing increasingly alarmed by Wilson's steps toward war.

Wilson had won re-election just a few months earlier in spite of his party's underdog status at the time, largely on the strength of the slogan, "He Kept Us Out of War." The war referred to was primarily one with Mexico - the revolution that made Pancho Villa famous was playing out very messily at the time, and there was a certain pressure for the U.S. to get involved - but, of course, war was war. Senator Lane, from deep inside the Capitol, would have been able to clearly see Wilson's growing enthusiasm for direct American intervention in the war in Europe. The hypocrisy of running for re-election on a platform of implied commitment to peace while quietly gathering forces to take the nation to war (after the election was safely won, of course) was not lost on him.

So when, two months into his next term and after several months of steady war-drum beating, Wilson asked Congress to let him arm American merchant ships, Lane and a few other like-minded senators (most notably Robert LaFollette of Wisconsin) threatened to stop it with a House they were willing to go along with the plan if one little change were made in it: They wanted those American ships to stop carrying munitions to sell to the Allies. And they wanted that written into the law: Arm the merchant ships, fine - but no more guns and bullets would cross the sea until after peace was achieved.

Well, of course, that was not at all what the White House had in mind. The word that came back surprised nobody: No deal.

So in early March, Lane and his colleagues filibustered - a good old-fashioned talking filibuster, a la Rand Paul or Wendy Davis - and the bill died a-borning.

Wilson was furious. He lashed out at Lane and his colleagues personally, calling them a "little group of willful men, representing no opinion but their own" that had "rendered the great government of the United States helpless and contemptible."

Lane was shocked by the animosity this stand earned him, both in Washington, D.C. and back home in Oregon. Hate-mail started pouring into his office. The Portland Morning Oregonian - a Republican organ at the time, and no friend to Democrat Lane under any circumstances - wrote an editorial that essentially apologized to the nation, on behalf of every Oregon voter, for having sent Lane to Washington. A recall movement was launched and started growing.

A month later, Wilson got the pretext he needed to take the country to war when a bungling German diplomat named Zimmerman used British undersea cables to telegraph a proposal for an anti-U.S. alliance to the Mexican government. The British, of course, promptly leaked it, and Wilson was soon before Congress asking for a declaration of war.

Lane was, by this time in his life, a very sick man. He had painful chronic kidney disease and advanced heart disease on top of it, and the stress of the hate storm swirling around him following his filibuster had exacerbated his health problems. His physician urged him to stay home and rest in bed. But Lane was adamant. He would go to the Senate floor and he would vote against entering the war.

And so he did. Just six Senators voted "no," and he was one of them.

Seven weeks later, on his way home to Oregon, he suffered a paralytic stroke and died.

The Oregon Journal, upon his death, may have wanted to eulogize the intransigent pacifist - but a month and a half into the war, an increasingly pro-war public was in no mood for anything like that. So the paper contented itself with a short and poignant message:

"He paid for his choice with his life."

And perhaps he did. The stress of all the animosity his principled stand earned him weighed heavily on him, according to his friends' recollections. It may not have actually killed him, but most of them thought it did.

Sometimes history's heroes are neither successful nor survivors. Sometimes they're the men and women who take up lost causes because their ethics leave them no choice. Like the ship captain who refuses to "fall into the lifeboat," they're forced to choose between being destroyed and doing what they can to oppose a rising tide of evil. Such a man was Harry Lane, and Oregon should be very proud to claim him.