Spring arrives along with candidates 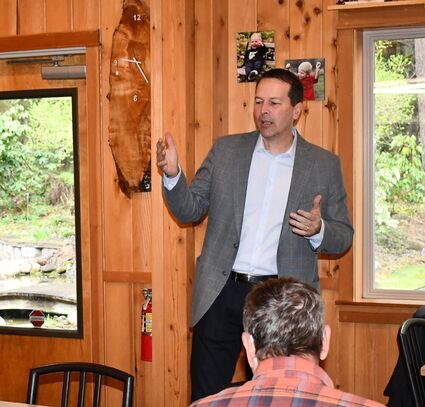 RAINBOW: Candidates out to challenge political incumbents made their case last week at Takoda’s Restaurant. Seeking a post at the national level is Darin Harbick, who would like to replace Ron Wyden as one of Oregon’s two U.S. Senators. Seeking the Eastern Lane seat on the five-member county board of commissioners, Kyle Blain is facing off against Heather Buch, who has filed for re-election.

Harbick, a local resident who owns a number of businesses, would first have to beat six other Republicans in the May 17th primary election. In the Buch/Blaine match-up, a candidate who receives 51 percent or more of the primary's votes would be declared the winner and wouldn’t have to run again in November.

During his presentation, Harbick cited Oregon’s shutdown of businesses for the COVID pandemic as a catalyst for his decision to run for public office. He criticized vaccine mandates that went too far and vowed: “to use every tool at my disposal to oppose unconstitutional mandates” that encroached on personal choices.

A fiscal conservative, he voiced support for a balanced budget. He also opposes raising the national debt and said he supported the economic policies of Kentucky Sen. Rand Paul.

Recalling his recent trip to the U.S./Mexico border, Harbick was critical of the amount of drugs and illegal immigrants he believed were making it through gaps in the wall the Trump administration had tried to plug. In another reference to immigrants, he said during his visit to Vale, Oregon, he learned farmers there were giving their asparagus crop away for free because they couldn’t find workers to pick it.

Kyle Blain used his opportunity to tell local residents a bit about his background, which includes working with his father’s construction company that built custom homes. From there he branched out into real estate financing with an eye on aspects of property development and the housing needs in communities around Lane County. Looking at the delays people have faced getting their homes replaced after the Holiday Farm Fire, he criticized Commissioner Buch for contributing to those sort of restraints.

In particular, Blain said he felt the current board has leaned too far toward the progressive side of the scale in its decisions, citing the majority’s support for riparian setbacks that would have property owners move homes away from where they stood before the wildfire.

contributed to dangerously low numbers of deputies out on patrol around the county. That, he said, was one of his key reasons for deciding to make a run for the East Lane seat. 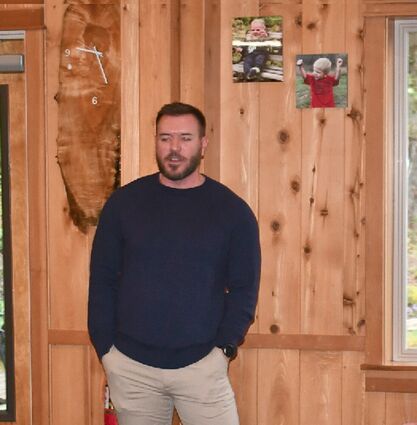 Blain added that as an individual, his one vote wouldn’t swing board decisions to the conservative side. He said he hoped if he was elected, voters in the West Lane District would also elect a conservative, and, “then there would be real change in the county.”

The United State Senate Republican candidates that Harbick is competing against include Jason Beebe, the current mayor of Prineville; Christopher Christen-sen, of Beaverton, a consumer finance specialist; Robert Flem-ing, the only candidate who hasn’t released biographical information; Samuel Palmer, an EMT and firefighter from Seneca, OR; and Jo Rae Perkins, of Albany (the only woman on the ballot) a semi-retired insurance agent; and the final Republican candidate in the primary race for U.S. Senate is Ibrahim Taher, of Eugene who has taught philosophy in high school.