Starnes and Pelton are on May ballot 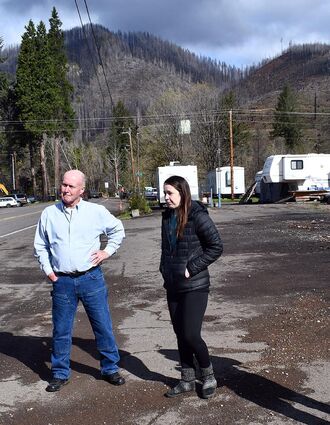 Patrick Starnes and Ashley Pelton were in the streets of Blue River campaigning for Oregon Governor and State Senate, respectively.

BLUE RIVER: Candidates for Oregon's governorship and State Senate District 6 were in Blue River recently for a meet and greet with local residents. Both say they would like to avoid partisan issues and help rural communities have a stronger voice.

Patrick Starnes, who'd like to become the state's top official, said he was drawn to the idea of "working on the bigger picture, which means the whole state." A Democrat, one of his key issues is campaign finance reform, which he's put into practice by not accepting any contributions over $1,000 as well as financial support from corporations or political action committees.

Starnes, who used to live in the area and served on the McKenzie School Board, said in going around Oregon he's found people have a lot more in common than they're often given credit for. "People are tired of divisiveness," he says. "People would like to share successes for a change."

In her campaign, Pelton is particularly focused of healthcare issues including getting rural clinics certified to increase their access to resources as well as funding addiction treatment services. Those measures, she says, will prove valuable when, "You're not just treating that person but the others in the community as well."

Pelton will have fewer butterflies when ballots are counted. She's running unopposed in the Democratic race for SD 6.